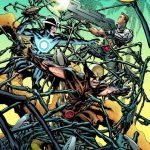 Tying in with December’s Venom Island, Marvel has announced a series of variant covers for the month which feature the likes of the X-Men, the Fantastic Four, and Captain Marvel battling their way through the symbiote-infested island. Check out five of the covers here… X-MEN #3 VENOM ISLAND VARIANT by MIKE MCKONE EXCALIBUR #3 VENOM […]