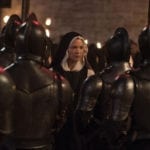 Up For Love, 2016. Directed by Laurent Tirard. Starring Jean Dujardin, Virginie Efira, Cedric Kahn and Stephanie Papanian. SYNOPSIS: Successful lawyer Diane (Virginie Efira) is in the midst of breaking up with husband Bruno (Cedric Kahn) but it’s complicated by their being business partners.  After an angry dinner together, she storms out of the restaurant but […]