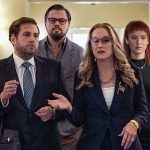 The Writers Guild Awards is another major stop on the awards season run. The very best of film and television writing is honored at the WGA Awards, and this year’s instalment saw some standout wins. Everything from late-in-the-game Oscars frontrunner CODA landing an Adapted Screenplay win to the critical darling Succession nabbing a win for […]

Members of the Writers Guild of America have voted to authorise a strike with 95% support. There hasn’t been a writers strike since back in 2007 which lasted for 100 days. That strike affected many properties and caused many a hit show to stumble and ultimately never recover. The dispute is between the writers and […]