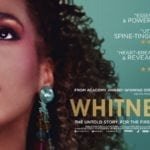 Whitney, 2018. Directed by Kevin MacDonald. SYNOPSIS: An in-depth look at the life and music of Whitney Houston. Before her death in 2012, Whitney Houston had become a punchline to a bad joke and her career had nose-dived after years of drugs and tabloid scandals. Her phenomenal voice had been forgotten. Following her death, people […]