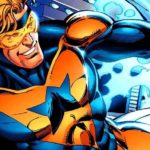 Back in September 2015, Warner Bros. announced that Greg Berlanti would be swapping the Arrowverse for the DC Extended Universe with the super producer signing to direct a Booster Gold movie, scripted by Zack Stentz (Thor, X-Men: First Class). Things fell silent on the proposed project until last year, when Berlanti revealed that the film […]

Back in September, rumour broke out that Greg Berlanti, the man in charge of DC TV shows like Arrow, The Flash, Legends of Tomorrow, and Supergirl, was working on a feature film focusing on the DC crime fighting duo of Booster Gold and Blue Beetle. While that film has yet to be confirmed by either Berlanti or Warner Brothers, […]