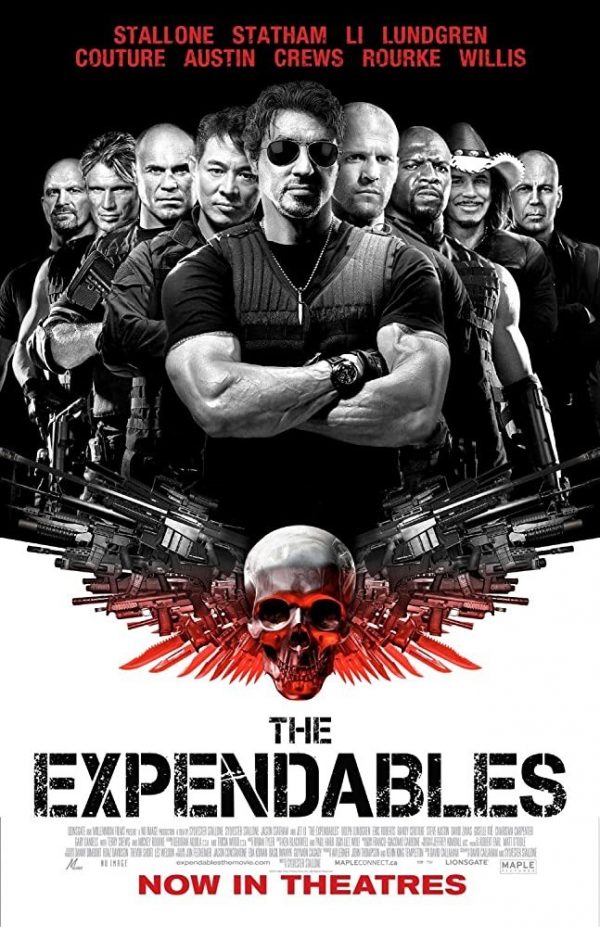 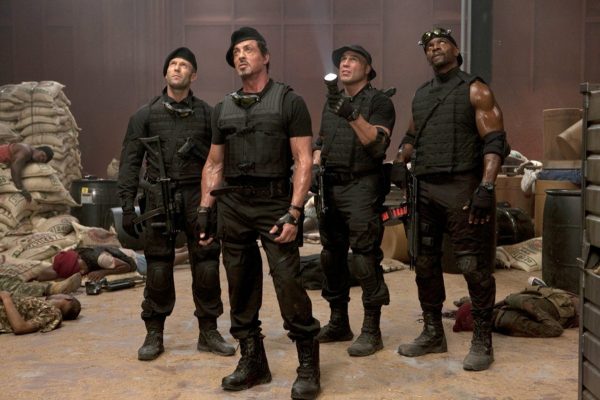 I love action films. It’s a grand statement I know to actually have love for a genre. But I really love action films, almost romantic love; I get excited when I’m going to see a new one, I plan evenings to watch a few of them and look forward to such an event. I love classics like Akira Kuwrosawa’s Seven Samurai as much as I love fan-boy wet dream flicks like Universal Soldier Regeneration, which for the uninitiated is Universal Soldier 3 (yes you read that right and its really good, Dolph and Jean Claude are in it too). So imagine my excitement when The Expendables marketing vehicle started to brazen itself across You-tube and our humble cinemas. Yes a little bit of wee came out!

I remember the trailer in detail and I remember loving the action. It was just like any other action trailer; the classic gritty growling voice mentioned something about an unimportant plot of people being expendable with flashing images of big guns and big muscles carried by big men. Now you are probably thinking that this sounds like nothing more than a classic 80’s action film. You could not be more right because as these muscled mountains revealed themselves it dawned on me that this was my dream cast. My everything: Sylvester Stallone (who wrote and directed), Jason Statham, Jet Li, Randy Couture, Bruce Willis, Dolph Lundgren, Eric Roberts, ‘Stone Cold’ Steve Austin, Terry Crews, Mickey Rourke and, wait for this, Arnold Schwarzenegger. 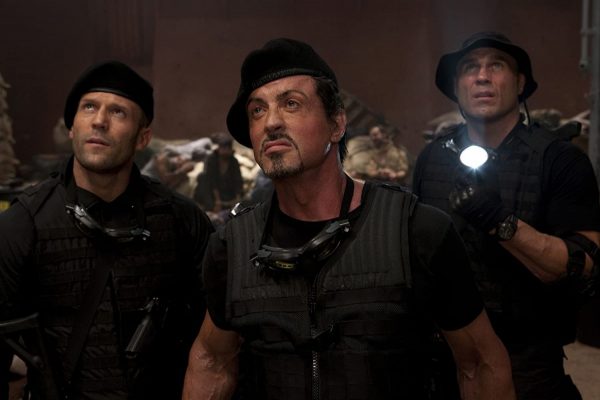 This cast had real action history. I’m not sure I need to tell you of the classics of Universal Soldier (Dolph Lundgren), Die Hard (Bruce Willis), The Terminator ( I’m not looking up how to spell it again), First Blood (Sylvester Stallone) and even modern gems like The Transporter (Jason Statham) and The Condemned (Steve Austin).

My first reaction was to scream and shout but I have been disappointed before; rehashing these old action stars could be a disaster, it could not have the action promised; trailers can be a deceptive mistress. I was not worried about story, who needs story, when you got that much bicep really who needs it? What I wanted was real action. No CGI. I wanted real explosions, real martial arts, real attitude, real hard humour and utterly loveable, recognisable characters. I wanted a film that knew what it was, knew the cast, respected what they had done and delivered on a promised film of real old school action. When I went to the cinema to see this I wanted to be able to turn my brain right off and enjoy the fireworks. I knew it wouldn’t win any Oscars, I knew there would be no heartfelt moments, no emotional speeches that would get pale faced teenagers wet. And not one vampire.. So did it deliver? The answer is… 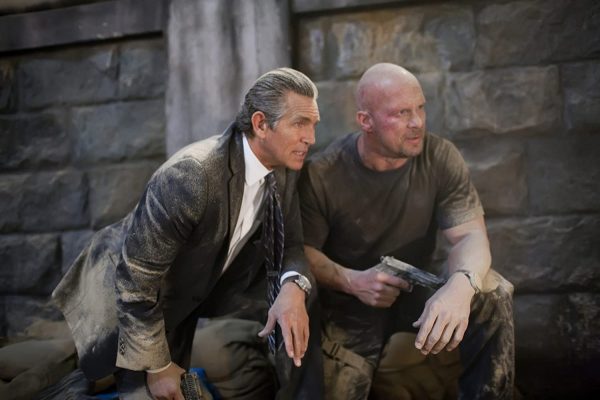 Of course it did and if you haven’t seen the film and the thought of a giant Swede fighting a feisty Chinese man is your idea of the greatest thing ever then stop reading now and go see it. Please. The story is really unmentionable, basically the Expendables are a team of badass mercenaries, for hire who have seen and survived one too many missions. Bruce Willis’ fleeting cameo as CIA agent, Mr Church hires the team for a suicide mission against a non-descript South American dictator, whom in real life would have probably been put into power by the CIA. This dictator is cruelly abusing his position of power with the help of corrupt FBI agent Eric Roberts. So enter Sly and his multi ethnic team of super hard men, which consists of Dolph Lundgren, Jet Li, Jason Statham, Randy Couture and Terry Crews. Backstabbings and disloyalty ensues. Apart from Randy Couture who is just an embarrassment the relationship amongst the team has a real feeling of respect and jovial camaraderie that can only be expected from seasoned veterans such as these. As an audience you get a feeling that the cast not only enjoyed making this film but they all have high admiration for each others respective career and this just adds to the fun for you and I. A specific mention should be made to Sylvester Stallone’s ‘Barney Ross’ and Jason Statham’s ‘Lee Christmas’ who as the relevant old and young ring leaders of the team really give the feeling that they are not only brothers in arms but also friends. And as they have the bulk of the screen time it is important that this relationship feels real. The two of them have very limited back story apart from a fleeting visit to Lee Christmas’ object of desire Charisma Carpenter (Cordelia from Buffy). Characterisation is restricted really to their weapons of choice they wield; Sly rocking a six shooter and the Stath flicking out knives left, right and centre. As a duo they hold up most of the screen time with banter that can occasionally be stilted and forced but it is always funny and harks back to 80’s buddy action flicks, therefore can be forgiven for its occasional bum notes. Mickey Rourke has probably the most time actually trying to act, playing ‘Tool’ the man who is left at home dealing out the jobs for the team. His one touching scene where he motivates Barney Ross to do the right thing really shows off how Mickey Rourke is a class above most of these guys when it comes to dealing the heavy emotional clout. The other members have very limited characters and are really only their for their skills with their fists and feet or ability to hold the loudest gun in the world. 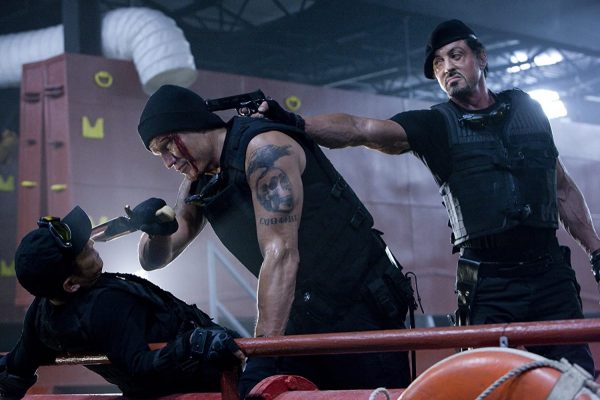 This is starting to feel like a negative review but trust me its not because I’m about to get to the really good part and that’s the action. The fights are everything you would want. They match up the people that you want to have matched up and beefy guns that I’m sure do more damage than is humanly possible: Dolph, who’s character is called Gunnar, is a six foot five monster and he fights Jet Li a five foot six kung fu legend, both martial artist masters and both rock two brutal and uncompromising fights: Box one ticked. Sylvester has a back-breaking (during this stunt Sly broke a bone in his back which had to be fused) fight with Stone Cold in a cellar that doesn’t disappoint. There is also a moment with Jason Statham in a plane that cannot be forgotten ever. The cherry on top being an explosive climax, involving the whole team, really sums up the whole film. It has ridiculous men against ridiculous numbers doing, and I quote Theodore Logan, the ‘Most excellent’ of things. I would and could go on forever mentioning different action set pieces that litter this film adorning each of them with fabulous superlatives every one deserved. I won’t even let it escape about the greatest gun in the world, with the greatest sound known to man.

But what I loved about The Expendables is that it knows what it is: It has no story and no interesting or realistic characters. The cast has an average age older than forty-five and do stunts that I think most twenty something’s would find taxing and daunting. The dialogue can and does occasionally fall flat with Arnie and Sly’s short exchange feeling very forced and if it wasn’t for the funniest final line saving the scene it would have been a little embarrassing. The thing is that this is a rubbish film and if it didn’t spend the tight 90 minute running time constantly winking and nudging to its hopefully informed audience making sure they are in on the joke and mixing this with jaw dropping, knee slapping action then it would remain so. But if you have watched most of these men grow old or emerge as fledging action stars then this film will not thwart your expectations. JCVD redeemed Jean Claude Van Damme and all is left is Steven Seagal because Sly has done it for everyone else.