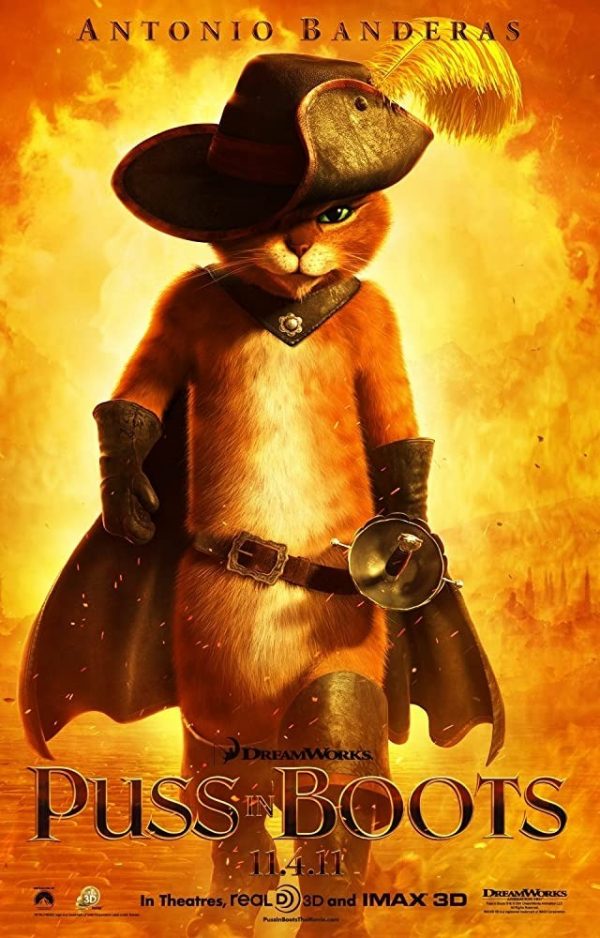 The heroic Puss in Boots is pitted against the outlaws Jack and Jill, who have discoved an ancient power that threatens the world.

As I’m sure most of you remember the character Puss in Boots made his first appearance in Shrek 2 (2004) as a secondary character, and for me he was the highlight of a franchise that progressively declined and sullied the name of the instant classic Shrek (2001). So Dreamworks Animation have decided to give him an origin story to give this great permutation of the Puss in Boots character the chance to survive on his own.

I know that what I’m about to say is ultimately going to come off as sounding negative but I want to start by saying that I think this is a fun little family flick with some salvaging adult laughs that is ultimately worth a watch.

The story firstly explains how Puss’ (Antonio Banderas) outlaw status came about, which coincidentally involved him being framed by his best friend Humpty Alexander Dumpty (Zach Galifianakis). In order to clear his name he partners up with the backstabbing Egg and his partner Kitty Soft Paws (Salma Hayek) to steal magic beans from Jack and Jill (as in Up the Hill) to the Giant’s lair (as in the Beanstalk) to retrieve the ‘Golden Egg’ treasure.

Now the revisionist fairytale mash-up that was pioneered with Shrek has been progressively butchered and repeated for the last decade. So instead of the skill of those elements working cohesively isn’t as impressive as they would have been a decade ago – instead they’re a little stale.

The Shrek version of the Puss character (because of the Antonio Banderas influence) has a great Spanish / Zorro feel and that gives the filmmakers some great opportunities to infuse elements of Spanish culture. The downside is that unfortunately earlier this year Verbinski and Depp’s Rango (2011) was set in a comparable western setting featured some of the most mind-bogglingly amazing computer generated animation – especially in the great visceral characterisation of the anthropomorphic characters – that the relative simplicity of the ‘Shrek’ aesthetic felt like it inhibited the film.

The one great saving grace for Puss in Boots is that the film-makers emphasise his ‘catness’. Some of the little touches that showed off what you’re likely to know about if you’ve ever had a cat (or watched YouTube) really cracked me up. Without spoiling anything (that wasn’t already featured in the trailer) – Puss lapping at shot glasses with milk, the cute cat eyes, his fur standing on end when he’s scared etc were highlights for me.

So is it worth seeing? Yes. Will the kids love it? Definitely. Will the kids of all ages love it? Maybe not love it, but I admonish you if you don’t love the wonderfully random ‘aaaaaawwwwww’ Cat who literally had me laugh out loud every time I saw him.