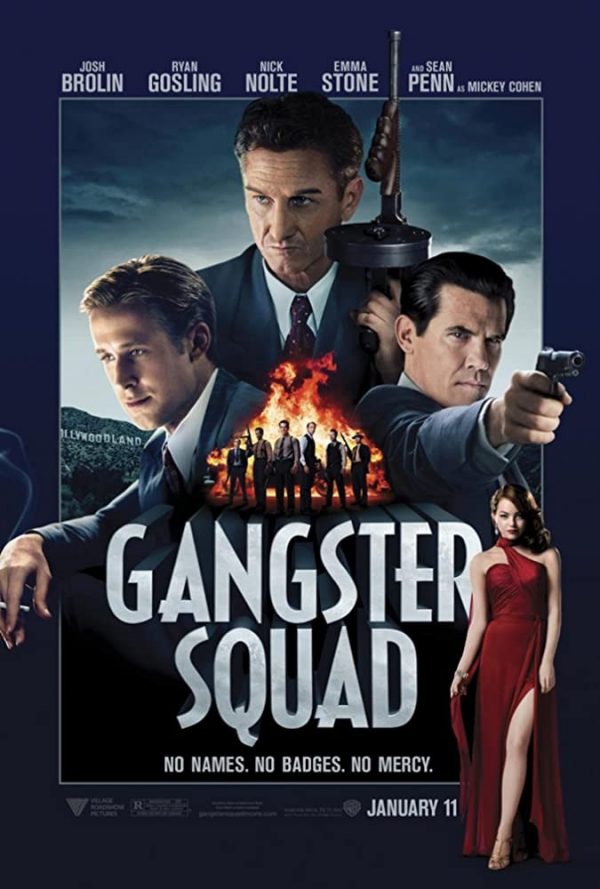 Based on a true story, Gangster Squad follows an off-the-books team of LAPD officers trying to take down a ruthless mobster, Mickey Cohen (Penn), in 1949 Los Angeles. 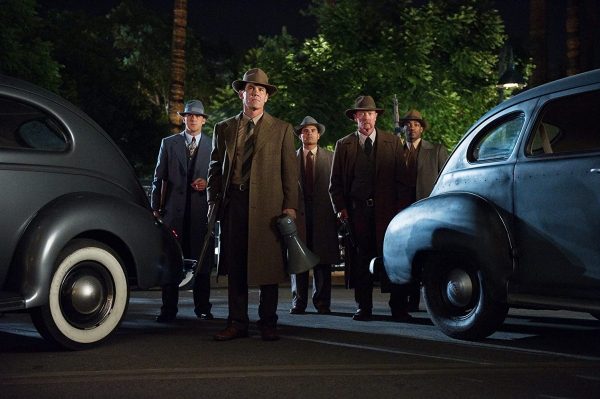 There is an eternal air of interest in the mob story. Back in the 1930s and ‘40s the gangster genre was a booming success at the box office. Citizens (mostly those in America) still tackling the crippling debt of the Depression found some odd solace in watching an anti-hero take what everyone wanted – money. The likes of Scarface (the Howard Hawks version), Little Caesar and The Public Enemy highlighted this new breed of man – they were exciting, taboo and fresh. As cinema changed so did the crime film, constantly changing focus from police to the thieves. Gangster Squad is the latest attempt at cashing in on cinemagoers’ fascination with cops and criminals and, more specifically, the familiar flashes of Tommy-gun shots and Art Deco backdrops of the City of Angels.

Visually the film is dazzling – exuberant colours, varnished sets and alluring costumes. Director Ruben Fleischer has clearly studied the aesthetic of these films (from the early classics, the Hollywood Renaissance’s Chinatown to the early ‘90s masterpieces such as L.A. Confidential) and brings a stylish showmanship to the project. Some issues arise in how much Fleischer enjoys brandishing said style; a superfluous Snyder-esque obsession with slow-motion and “interesting” camera angles/set-ups often distract from the story at hand. The scenes that play best are the static shots showing pure violence. If the 1930/40s films had to shy away from brutality and sleaze, Gangster Squad in the 21st Century takes great pleasure in its freedom to do just the opposite. When the butt of a gun is pummeled into a mobster’s face or a round of ammo pounds through a goon, it makes an impact, in frame and out. However, presenting these moments in slow-mo (as Fleischer habitually does) extracts that visceral element and implants a feigned quality. 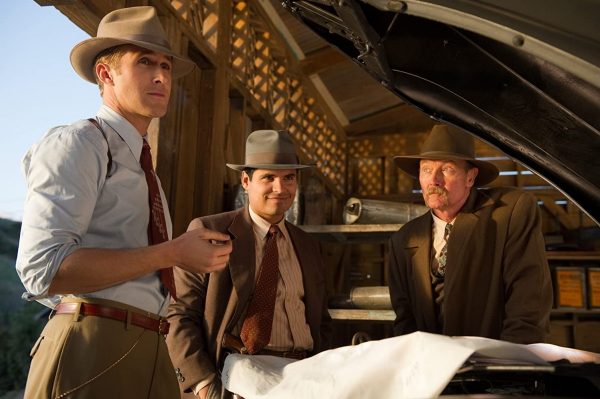 Buying into the plot is never difficult, though there are moments where capturing the essence of that era requires outdated dialogue. For some these may prove too jarring for a contemporary audience, not wholly aware of the meaning behind such lingo. What’s more, the sheer bravado on show may, at points, appear laughable; a montage scene midway through that boasts unbridled masculinity seems both fun and funny.

Sean Penn as the villain suffers the worst of the script, with lines such as “back home I was a gangster, now I’m GOD”. Despite getting the short end of the straw with the screenplay, Penn does a fantastic job at playing the hot-headed hustler. With sunken eyes that appear to blacken completely, like a great white ready to kill, Penn comes across as a truly malicious figure. Characterised as a man with an army of henchmen, there has been some effort put into the presentation of his men, too. Troy Garity as the snake-like Wrevock earns enough attention to make the Cohen troupe very formidable. 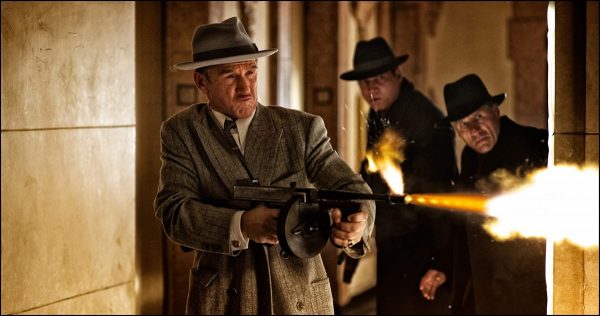 The villains are strongly outfitted, perhaps more so than the leading men – the eponymous Gangster Squad. Josh Brolin as the protagonist has no faults; he fits into the world with perfect ease. His rugged, grizzled manner makes for a great contemporary Bogart. Less can be said for his company, predominantly made up of cliché stock characters. Ryan Gosling, Hollywood’s main man, whilst providing a pretty face to the picture, and some decent quips, meanders through the narrative with a two-dimensional character. The remaining players, such as the token black guy (a charismatic Anthony Mackie), the Mexican half-wit (Michael Pena), the nerdy wire-tapper (Giovanni Ribisi, imbuing the film with some humanity) and the crotchety sharp-shooter (Robert Patrick, still a commanding presence), are given little-to-no introduction and are left with the dreaded omen of “which one will become the victim that pushes these guys to fight for all their worth” hanging over each of their heads. A final mention must go to Emma Stone who blazes up the screen with a fiery magnetism, though sadly that’s all she gets to do. Her chemistry with Gosling is still potent (see Crazy, Stupid, Love for the previous example) but the two share very little screen-time together.

Very glamorous though sometimes tawdry, it has sincerely exemplified the quality of the classic gangster film. Whilst characterisation and script are poorly executed, Gangster Squad is an entertaining piece of cinema. More of a guilty pleasure, it’ll never garner the praise of Fleischer’s muses (unabashedly hinted at throughout, including one scene literally lighting up the frame with a “Chinatown” sign), and will doubtfully gain those films’ immortality.