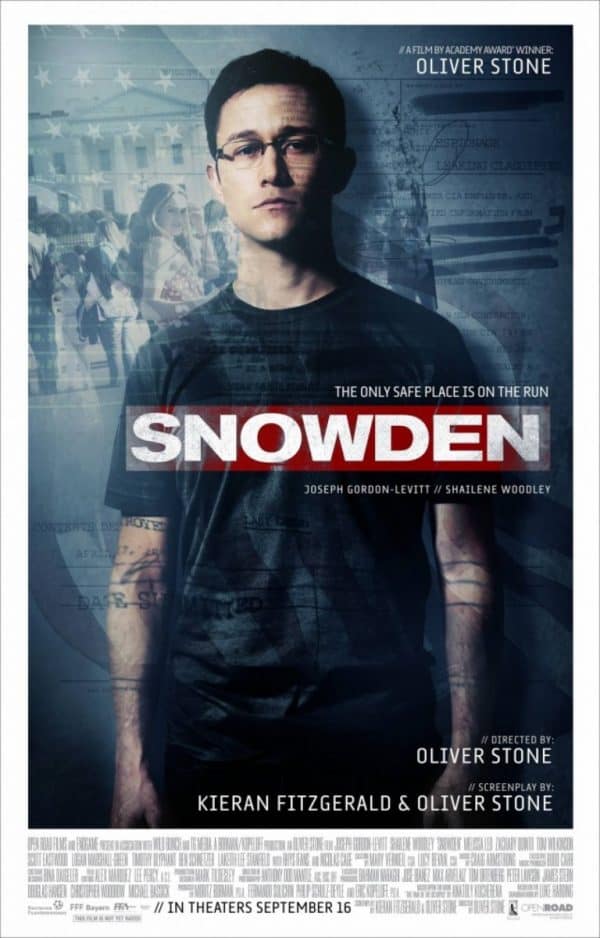 The NSA’s illegal surveillance techniques are leaked to the public by one of the agency’s employees, Edward Snowden, in the form of thousands of classified documents distributed to the press. 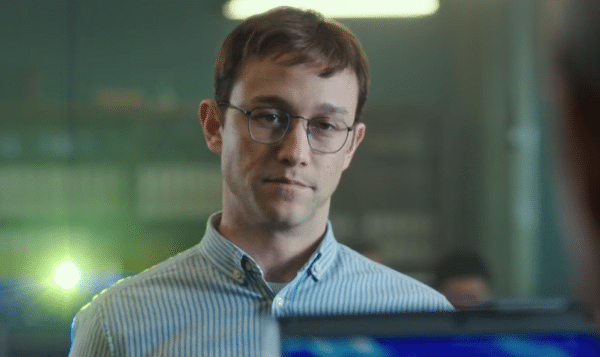 Two years ago I had the privilege of watching Oliver Stone’s violently controversial and polarizing cult hit classic Natural Born Killers where immediately afterwards the man himself took part in an eye-opening Q&A as to what makes him tick as a filmmaker. At the time, he was in the state of anger and outrage, equating crafting that film to the equivalent of “throwing up on screen”. When Oliver Stone is passionate about a project, he doesn’t hold back from expressing anything. He is as controversial a filmmaker as they come, regardless of the genre he is working under.

So here’s the surprising (and potentially disappointing to some) part of Snowden (a dramatization of the life of Edward Snowden, carefully pieced together with information and assistance from the hero/traitor): it doesn’t really feel taboo or controversial at all. If anything, it is effectively written storytelling that does justice to the mindset of the paranoid spy mentally torn on where his allegiance with his own country allies. The most controversial Snowden gets are some blast remarks that the Obama administration did nothing to correct the wrongdoing that was going on within the Bush administration. Sadly, there will be some critics that furiously slam out an angry review on their keyboard just because of that, but I digress.

Oliver Stone deliberately paces Snowden with a slow burn amidst conversations regarding politics and privacy that unfortunately hit or miss with their levels of engagement. One sequence in particular that stands out shows Edward Snowden making love to his girlfriend Lindsay on a bed, also making a point to emphasize the anxiety and uneasiness within his mind as while thrusting, he uses his peripheral vision to notice the webcam of his laptop, a common device that could be used to spy on civilians against their will. Consider it PTSD for the harrowing and morally gray work environment he finds himself in performing 12 hours daily.

However the greater lesson to be taken from the film is that you don’t have to be someone within the government or a criminal to unknowingly be spied on. You can be a friend of a friend of a friend connected to someone caught up in some shady business, and because of that your emails, texts, social media, and so much more will then have open hunting season access. On a moral level, it is disturbing, cementing that Edward Snowden probably is more on the side of hero than traitor. He tried bringing the revelations to the proper authorities in a diplomatic fashion; nobody listened. What else was he to do? 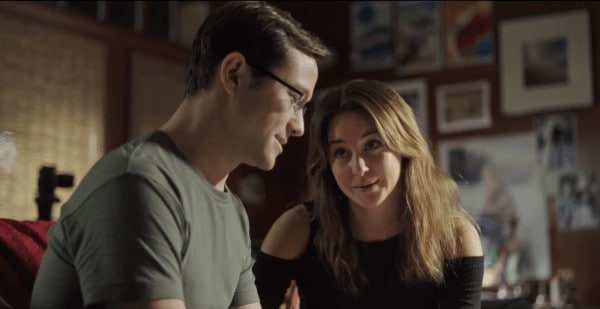 With that said, Oliver Stone isn’t really concerned with playing devils advocate and bringing to light what good (such as possibly preventing massive terrorist attacks) that could come from all of the heavy surveillance. Snowden isn’t a movie out to present everything from different perspectives, but more-so out to place Edward Snowden and his controversial actions on a pedestal. If you don’t like the real Edward Snowden before watching this movie, you aren’t going to like it. Anyone against Snowden is generally presented as an obstacle or villain.

At the same time, the cast and crew do deserve to be commended. Oliver Stone structures the film excellently so all the paranoia and anxiety consistently continues to build and build until Snowden finally reaches a breaking point. The stress amounts to illnesses, a fractured mind leaving him questioning his own political beliefs, and a few nasty heated arguments with his girlfriend, all of which make for fascinating entertainment. During the end, all of the jovial and inspirational feel-good heroic moments feel earned, and that Snowden did operate in the best interest for America.

Also, with so much talk within this review about Edward Snowden, it should be made clear that Joseph Gordon-Levitt absolutely nails his performance. Admittedly, he sounds nothing like the actual Edward Snowden (what was the point in putting on a much deeper voice), but he expresses that mental inner turmoil and anxiety to perfection, leaving us with a real-life character that is consistently intriguing to watch. Shailene Woodley is also excellent as Snowden’s girlfriend, completely shut out and in the dark regarding the on-goings within the CIA and NSA. What makes her personality stand out is that, in a way, she represents the common American, who at the time was horrifyingly blind to everything happening. Together, their romantic subplot is what anchors the movie into something far more human that civilians and moviegoers alike will relate to.

Privacy is important, but unfortunately it is not currently a huge enough talking point in the 2016 presidential election; in a just world, Oliver Stone’s Snowden will correct the course. It’s not the best movie of 2016, but I can’t think of another that is more timely and relevant, demanding at least one watch.