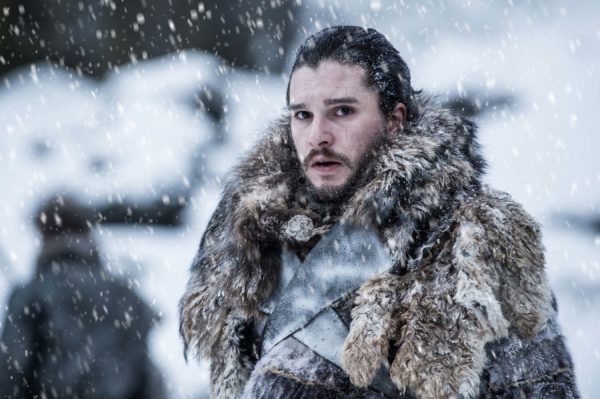 Every episode of Game Of Thrones will inspire many to come up with their own theory as to where the series is heading, now that the TV show is far ahead of George R.R. Martin’s fantasy novels. The last episode, Beyond The Wall was no different, featuring a scene which although many might have missed, others were obsessing over it for days.

The scene in question features Jon Snow returning from the ice, after falling through with a number of Wights during the later half of the episode. As we awaited for Jon to rise from the ice cold water again, it appeared that his trademark sword, Longclaw, which was centre focus in frame, actually blinked before Snow pushed his way back to the surface.

Did you see that Jon's sword which sir Mormont gave it to him opens eyes when jon comes out.#hbospoileralert #GameofThrones7 #GoTS7 #GoT pic.twitter.com/qvkTdJ6lBN

Of course, theories ran rampant as to the true meaning of this. Many claimed that Jon or Bran had warged into Longclaw in order to see what was happening on the surface and beyond the wall. Others believe that this is some sort of sign that Jon is in fact Azor Ahai and Longclaw is his Lightbringer. Or maybe this was further symbolism as to the great role Longclaw has to play in defeating the White Walkers; a blade of Valyrian steel is the key to cutting down armies of undead and their leaders.

Despite the fun fans had with this speculation, it was quickly shot down by director Alan Taylor. When speaking with Insider he revealed that he had no knowledge of this moment.

“That is so funny, somebody else mentioned that to me and I haven’t got a clue what they’re talking about. So either this sword is magic and it’s doing stuff on its own or something happened. I’m going to have to go back and watch that moment close up and in slow motion to see what’s going on there. I can say that there was no intention for that to be the case.”

It appears that it may in fact be related to the shadows falling on the sword or perhaps playing with ice which resulted in this weird supernatural effect. Or perhaps it’s all a clever lie to throw us off the scent. As we reach the final episode of the series it is clear that the tension is ramping up, with every theory potentially becoming the key to the rest of the series. The one question I am left with is, where’s Ghost in all of this? Any questions we have may in fact be answered in Season 7’s final episode, The Dragon and The Wolf.

Game Of Thrones’ final episode will air on August 27th on HBO and Sky Atlantic.