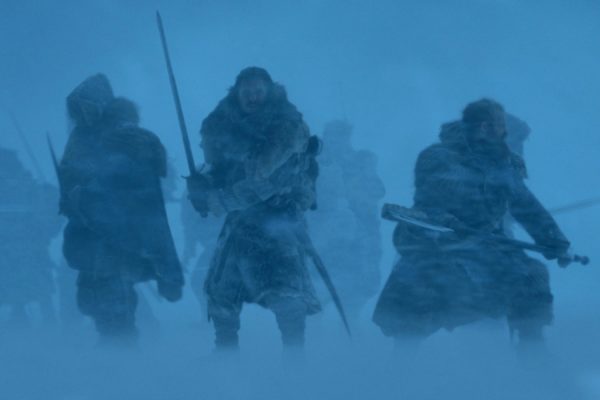 We’ve arrived at the penultimate episode of Game of Thrones Season 7 and my it’s gone so fast – nearly as fast as travel across Westeros has become.  At the end of Eastwatch we witnessed Jon and Co. head into the snowy North to capture a Wight – a member of the living dead army – and now here in “Beyond the Wall”, we shall hopefully find out how they are getting on with their suicidal quest.

The stench of mistrust is haunting the halls of Winterfell, between the Stark Sisters, Lady Sansa and the surrounding Lords, and also Brienne of Tarth toward (quite rightly) Littlefinger.  This mighty house is plagued with paranoia and you can’t help but feel that Lord Baelish is behind all of this ill-will.

Both Arya and Sansa are stood looking over the main courtyard, as the now highly-skilled assassin recounts the tale of learning to fire a bow and arrow, discovering her father – Ned Stark – had been watching all the time.  As Sansa begins to join in the discussion Arya turns the pleasant memory into an aggressive verbal attack, accusing Sansa of being an accomplice in the murder of her father, as she reads out the note Littlefinger had requested and ‘carefully’ hidden in the previous episode.  As Sansa attempts to defend herself – using age as her only defence -Arya rebuts this with an even stronger attack, bringing up young Lady Mormont and her age. 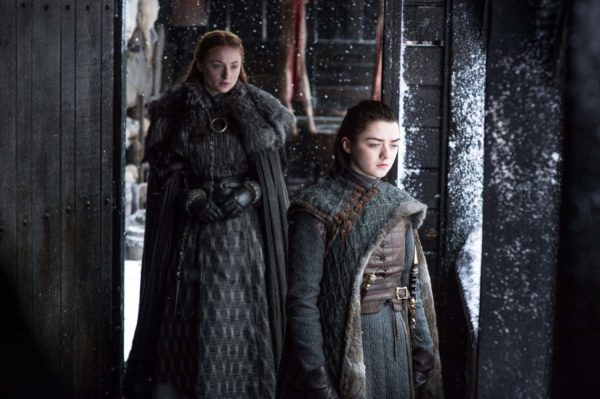 Flustered over the early confrontation with her sister, Sansa later questions Littlefinger on where Ayra got the message, to which he claims innocence.  Her worries become deeper as she raises her concerns over the fact she doesn’t (truthfully) trust the less-than-honourable Lords, especially seeing as though she has been married to two houses classed as enemies to the House Stark and the North.  Yet still her main concern is towards what Arya may have planned for her, and here Lord Baelish raises the fact that the skilled warrior Brienne is sworn to protect both sisters from harm, even if that means harm from the other sister.

Sansa takes to disposing of the evidence into her own hands –  mainly the note that implicates her with the Lannisters; she decides to search Arya’s room and whilst looking for the tiny scroll she discovers a cluster of faces ready to be used in a satchel.  Shocked at what she’s discovered, she’s even more taken aback when Arya appears behind her and talks about her time at the House of the Black & White, trying to get her involved in the Lying Game she played many years ago.  Attempting to make Sansa reveal the truth about her wants to be the Queen, Arya then turns the Catspaw dagger on Sansa describing what it would be like to wear her face.  As the young assassin draws closer to her elder sister, she flips the Valyrian dagger – that actually belongs to Littlefinger – over and hands it to Sansa. 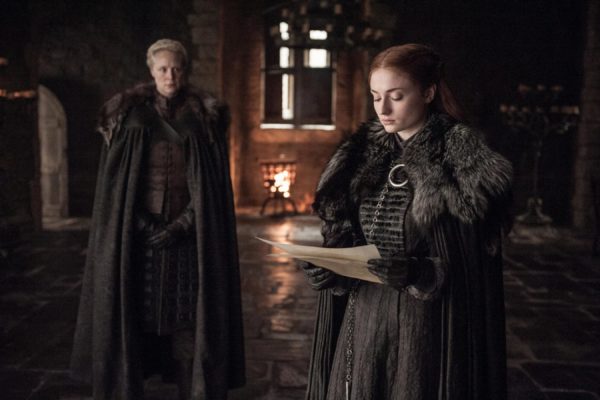 In the Great Hall we discover that Sansa has been invited to King’s Landing by Cersei, but unwilling to travel – rather wisely – she requests that Brennie represent her instead.  Lady Brennie isn’t pleased at this decision as it leaves both sisters unprotected near Littlefinger, but Sansa insists that Brienne makes the journey as the Lady of Winterfell has guards which she trusts with her life.

Over at Dragonstone, Tyrion has begun to become the Hand to the Queen of the Dragons and she isn’t enjoying his conversation.  Starting off jolly with talk of affection from Jon Snow, it rapidly becomes frosty as he highlights that the task to change Westeros for the better may not be completed in their lifetime and she may need to start thinking of a successor.  This does not go down well at all, though the Hand doesn’t let up as he continues to highlight she is not immortal and anyone of the hundreds of arrows that flew at her could have struck her heart and this war would have been over before it started.  Daenerys cuts this conversation short, informing Tyrion they will discuss the successor once she is on the Throne.

Beyond the Wall and we find Jon, Jorah, Gendry, Tormund and the Brotherhood Without Banners are trekking further towards the dead.  To keep morale from dropping, banter is kept high with Tormund and the Hound winding each other up about Gingers and Brienne, Jorah and Thoros sharing tales of fantastic battles and all gently winding up the new boy Gendry.  At one moment Jon even attempts to return the Mormont family blade back to Jorah, but he refuses to accept Longclaw back. 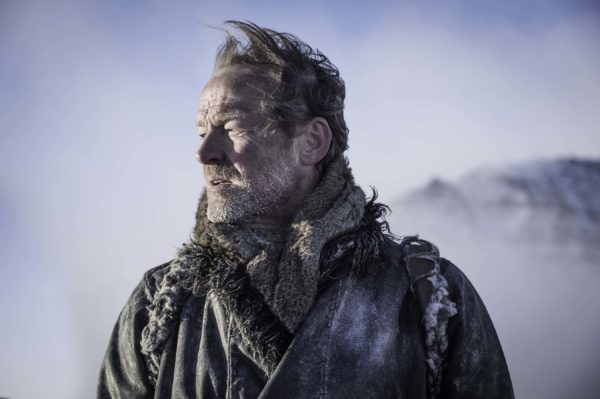 All seems to be going along smoothly until they notice a large bear in the distance; then they notice the large bear has blue-eyes and it bolts directly for them.  With the Brotherhood igniting their swords, the Hound is rooted to the spot out of fear due to the fire he sees before him,  the bear begins to maul Thoros and it takes the whole group to down it.  Finally, when the bear is still they inspect Thoros’ horrendous wounds and quickly cauterise them, hoping that this will mend them.

After more walking the raiding party come up against a small group of Wights and a single White Walker.  Ambushing them, Jon swings Longclaw shattering the White Walker and all but one of the Wights fall to the ground.  It appears that if you destroy a White Walker, all the Wights he turned also perish.  Quickly the raiding party bags the lone Wight, but not before thunder is heard on the horizon and then a whole army of undead is seen running towards them.

With Gendry sent on ahead to send a raven to Daenerys, the rest of the raiding party run as fast as they can with their evidence safely bagged, though they shortly find themselves in even more trouble as they step onto a frozen lake, which begins to crack under their feet.  With nowhere else to run, as hundreds of undead swarm around them, the men make their way across the lake, onto an island of rock in the middle.  As they get to the island, the ice around them crumbles and the dead on the lake tumble into the icy water.  The rest of the dead completely circle the lake waiting for the party to freeze to death, as they have nowhere to go. 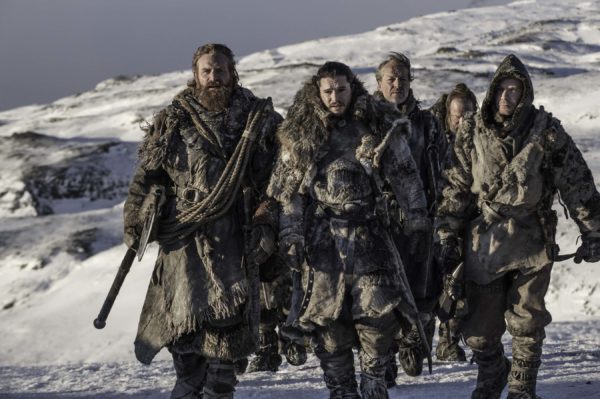 At the wall Gendry has arrived and though he is truly exhausted and collapses as the gates open, he still manages to whisper to Davos that a raven needs to be sent to Daenerys.  Once she receives the raven, she takes flight, much to Tyrion’s pleading not to go and rescue Jon from beyond the wall with all three Dragons.

Night passes and the party are freezing, they discover that Thoros has passed in his sleep, and they burn the body as suggested by Jon.  The Hound however has become bored with waiting and throws a large rock at one of the dead in congregation, knocking off its jaw.  Picking up a bigger rock he flings it, but this falls short hitting the now solid ice and it skids along the lake; both the Hound and then now jawless dead warrior realise that the ice is solid at the same time and make for battle.

The dead charge at the island in the middle of the lake, hundreds of them jumping and clawing at the party, unphased at the hammer falls, sword swipes or any of injury that the sustain they just want their quarry.  The raiding party continue to battle losing numerous members, as they’re torn from their group and then ripped to pieces as punishment for standing against them. 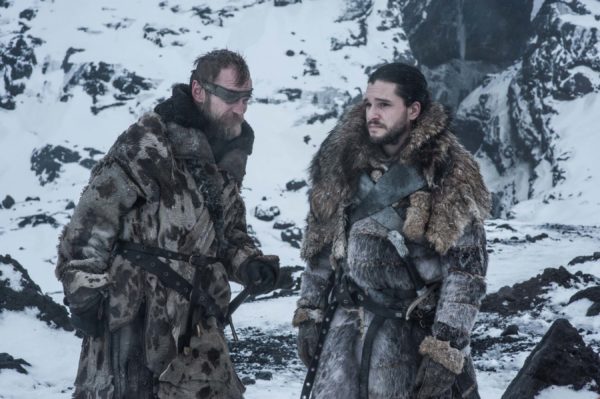 All seems lost when Jon calls for the party to fall back, but as they do their retreat is cut off as the dead clamber up the wall behind them, but then dragon flame washes across the ice eradicating swathes of dead in one pass.  Then more bolts of flame appear, eventually Daenerys descends on Drogon and the party clamber up the dragon to make their escape.  However Jon, needs to defend their exit so battles the dead as the make their way onto the dragon’s back, what they fail to see until the final moment is the Night King has launched an ice-spear directly at the neck of Viserion, and it has mortally wounded this mighty dragon.  With dying scream this golden-scaled dragon falls under the icy lake.

As the party look on in horror Jon see’s the Night King lining up his next spear for Drogon and the Daenerys, screaming for them to leave he’s dragged beneath the ice.  The Queen of the Dragon’s has no choice but to make haste and leave this place, dodging the Night King’s spear as she does. 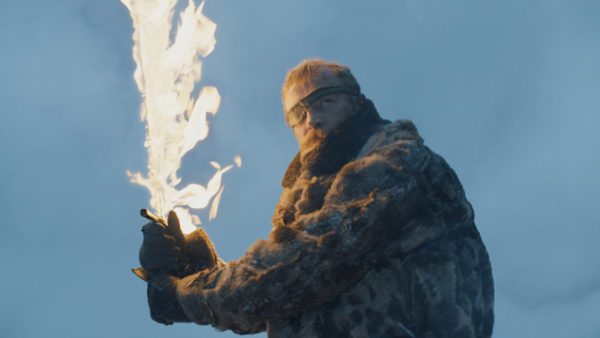 Eventually Jon climbs out of the lake, left to face the dead alone he stands there with Longclaw drawn, but bursting through the dead masses his Uncle Benjen arrives, dispatching Wights as he rides through them.  Dropping from his horse, he pushes Jon upon his steed and sets it off towards the wall before turning to face the hordes of undead alone, giving Jon a fighting chance to flee.

As Jon arrives at the wall, he’s frozen half-solid and when he eventually comes around he’s speaks with Daenerys informing her that he shall bend the knee to his Queen.  Meanwhile, back beyond the wall the Undead have pulled Viserion from the frozen lake and the Night King has added this mighty dragon to his ever-expanding army. 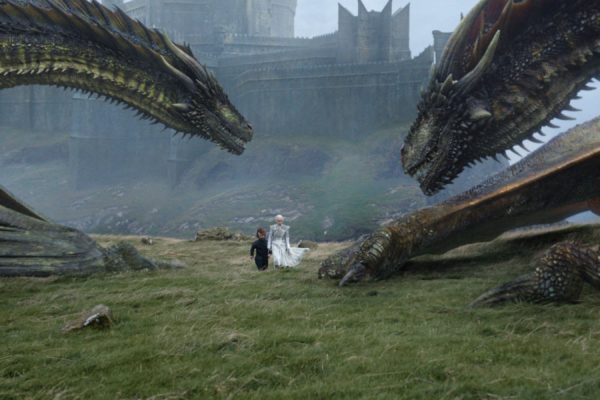 Such little movement, but so much going on. This week we didn’t seem to be running all over Westeros in a matter of minutes which is a bit of a blessing.  Though there is a matter Gendry, a raven and a Dragon Queen under question but everything else seemed to be nicely contained into a slim number of set pieces, allowing the story to build up perfectly over the hour plus time given.

The plan of Jon’s was ill-thought out from the start. We the viewers knew this, and we knew it was going to be a brutal ending, but never this brutal.  Watching this build to a siege without walls, where even time is your enemy, was a moment in which you sat at home apologising to those beside you for your language, as you whispered numerous obscenities towards the television.  What would have been a very wise plan would have been to take a dead body beyond the wall and wait until nightfall… ta-darr!  A Wight! Still that wouldn’t have made good television.

‘Beyond the Wall’ is just that – good television. We have the Seven Samurai or Magnificent Seven (however you roll) going to fight the undead, with dragons which we all presumed would be practically immortal until they arrived at King’s Landing.  Now though to paraphrase Boromir, “They have an undead dragon!” and everything has gone truly supernova within the world of Game of Thrones.  The enemy has a dragon – granted this enemy seems to move at a snail’s pace, but heck they’ll be moving at a snail’s pace with a dragon, which will be laughing at a wall made of ice.

Next week is the finale of Season 7, and if the two Queens do finally come to face-to-face for tea and macaroons you can bet your cottons socks Cersei will smirk when she asks, “Will there only be two dragons joining us today?”

Oh, and is Bran now Longclaw?