Sony have revealed the line up of free games coming to PlayStation Plus members this September.  This month’s selection of games offers a bit of something for everyone from shoot-em ups to RPG adventures so there’s lots of opportunities for many hours of varied gaming plus there’s a bonus title for PS4 owners and one for PSVR owners.  Watch the September preview below… 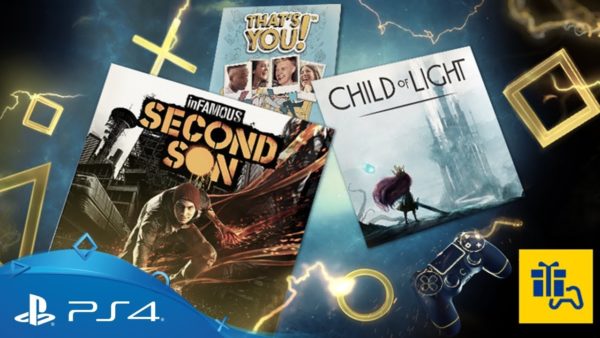 From the 5th September Playstation Plus subscribers on the PS4 will get to play inFamous: Second Son.  This 3rd title in the series puts players in the shoes of Delsin Rowe as you roam an open world trying to understand your powers and avoid those hunting you.  Also included this month is platforming RPG Child of Light that puts players in the role of Duke’s daughter Aurora as he is transported to a fantasy world of Lemuria.  If you are one of those people who enjoy getting together with your friends and family and asking silly questions on your PS4 then Sony have included That’s You as a bonus title.  A bonus title for PSVR owners is RIGS: Mechanised Combat League and sees players take control of large mechs in futuristic shooter sports.

On the Playstation 3 it’s time to test our driving skills in Truck Race where players can jump into fully destructible trucks and take to the tracks.  PS3 gamers will also gain access to sports title, Handball 2016.

For the PS Vita (also crossbuy with the PS4) is the arcade shoot-em-up We are Doomed and the Japanese visual novel Hatoful Boyfriend.

What are your thoughts on this month’s line up?  We’d love to hear what you think in the comments below.