“This is it. The worst. The absolute worst. No story, no character, no plot, just pain. Pure concentrated pain. There has never been anything this bad in the history of man. It should be studied, it should be analysed. It is pure evil. I don’t know whether to give it to a doctor to examine or a priest to exorcise. It is remarkable. Absolutely remarkable. Even the closing credits hurt. Everything about this movie is plain horrendous.” – Doug “Nostalgia Critic” Walker 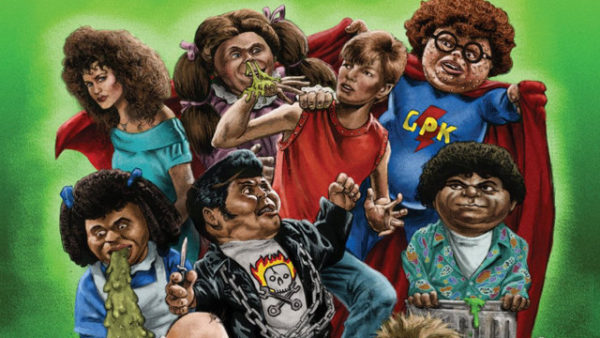 They say that imitation is the sincerest form of flattery. During the late 1960s, Art Spiegelman tried this theory when he worked on revival of a series of gum card stickers called Wacky Packages, which parodied all kinds of consumer products from food to floorwax, and the novelty lasted deep into 1970s. By the mid-1980s, cards manufacturer Topps revived the idea of parody bubble gum cards with Spiegelman and writer and artist Mark Newgarden called Garbage Pail Kids, which would poke fun at the highly popular Cabbage Patch Kids. Topps had met with Cabbage Patch Kids creators Coleco about a joint-venture, but when they turned down the offer as they felt trading cards were too ‘low rent’ for their brand, Topps decided to move forward with their parody. “At a meeting which I wasn’t present at, the idea to parody the Cabbage Patch Kids was under consideration and this Garbage Pail Kid painting that had been done for Wacky Packs was brought up,” Newgarden recalls. “And it was decided to spin it off into a full-blown parody series of its own. So that’s how the whole mess got started.” Newgarden, who came up with the brand name and the original artwork, felt that he was onto something with Garbage Pail Kids. “I guess I thought it should be somewhat successful, because there hadn’t been anything quite like it in kid culture in a long time,” he says. “It was something that I would have loved when I was a kid.”

Series One of Garbage Pail Kids hit stores in 1985, with characters like Adam Bomb, Hairy Mary, Boozin’ Bruce, Virus Iris, Stinky Stan and GuilloTina. While unsuccessful in its initial launch, word about the cards quickly began to spread and they became a hot property. “The whole gum card phenomenon is almost an underground type of thing,” Newgarden says. “It’s something a kid can buy with his own money, a real personal kind of purchase that doesn’t involve the kid’s parents’ or teacher’s approval. It’s something that is strictly on the kid’s own level. And that’s how it started to build momentum: kids found the product, got a kick out of it, told their friends about it and started to collect the things.” Part of what spurred on the card’s popularity was parent, teacher and religious groups fighting against them, which only made them more appealing. Newspaper columnist Bob Greene wrote several scathing pieces about them in the Chicago Tribune in 1985 and 1986 with his second article, Something to Chew on for Garbage Pail Kids, admitting he was part of the phenomenon. “The column was strongly disapproving of the Garbage Pail Kids series,” he wrote on February 16th 1986. “Many parents and teachers wrote to Topps to ask them to stop producing the cards. And do you know what happened? Based on the controversy, the Garbage Pail Kids became the hottest novelty item in the nation. Stores can`t keep them in stock. Public schools have banned them from the buildings because students spend so much time looking at them… As I say, this depresses me. The last thing I wanted to do was sell cards for Topps.” Newgarden adds: “It made the wire services, magazines and TV news fillers, and when parents started telling their kids, ‘I forbid you to have these awful, destructive things,’ the more popular the series became.” 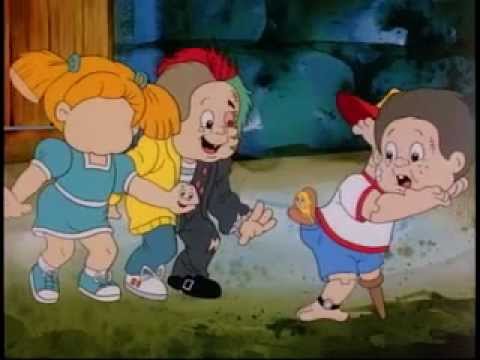 Garbage Pail Kids had become so popular that other companies were looking to cash in on its success, including CBS who commissioned a Saturday morning cartoon based on the characters. “We visited [Topps CEO] Arthur Shorin at Topps’s headquarters in Brooklyn and they said they had hired child psychologists who assured them that the content was similar to old fairy tales in that it gave children a face for their fears—not getting to the toilet on time, being maimed, etc.” explains the show’s director Bob Hathcock. “We could not use the really gross stuff.” In total, $1.5 million was spent on creating thirteen half-hour episodes of Garbage Pail Kids and DC also got involved to release a comic series. However production on the cartoon was never finished and DC pulled out of their deal when Coleco took Topps to court over the trading cards. “I believe they saw how well the series was doing so they decided to come after Topps,” Newgarden says of Coleco. “I can’t really go into much detail about it, but there was a court case, which tied our hands from working on the series for a little while. But eventually the whole thing was settled out of court.”

It wasn’t just the courtroom drama that stopped the show, as groups like Action for Children’s Television, the National Coalition on Television Violence, and the Christian Leaders for Responsible Television came after them. “There was a boycott in the Bible Belt against the cards, network, and advertisers and this caused CBS to chicken out and pull the show before it aired and before anyone saw a frame of film,” Hathcock explains. For Newgarden though, this was a blessing in disguise. Although the show would air in European countries, it would not be seen in his native United States. “I’m delighted the TV series was canned,” he jokes. “I’ve seen the pilot episode and it’s lame, castrated version of the Garbage Pail Kids, carefully avoiding everything that made our cards work. It’s just as well that it never made it to television.”

While a cartoon and comic book series struggled to get off the ground, a feature-film adaptation was still on the cards (no pun intended). What’s interesting about the inception of The Garbage Pail Kids Movie, however, is that no one is quite sure how it all came about. “I really don’t know but I do know that it did not originate with any of the creative team at Topps,” Newgarden claims. “To the best of my knowledge Rod Amateau or his agent approached Topps via Arthur Shorin or Sy Berger who handled Topps licensing deals with the studios.”

Rod Amateau was a veteran of the film world, having done stunts in the 1940s on films like Kiss of Death and Mighty Joe Young and he got his first directing credit for 1951’s The Bushwhackers. Throughout the 50s and 60s, Amateau worked on TV shows with the likes of George Burns, Bob Cummings, Phil Silvers and Patty Duke as well directing various episodes of shows such as The Dukes of Hazard, My Mother the Car and Mister Ed. By the time the 1980s rolled around, Amateau was in his sixties and looking to retire, deciding to take on jobs simply to fund his twilight years. “In the complicated structure of guild politics, of director’s guild politics, it’s important that minor directors like me – and that’s what I was, a minor director – minor directors like me fill their pension fund, and their health and welfare,” he says. “And many times we don’t have the luxury – any more than a clerical worker has – we don’t have the luxury of picking and choosing. So somebody says, ‘do you wanna do this’ and before the man’s finished you say, ‘yes!’ And don’t think I haven’t done that. I mean, there are directors who say, ‘I wouldn’t do that no matter what’ and they mean it! And they either starve or are successful subsequently. But I neither had the ability, the talent, the connections to have that kind of luxury.”

Of his own admission, The Garbage Pail Kids Movie was little more than a paycheque and he had no interest in the project, something that didn’t go unnoticed by Newgarden. “They brought Amateau in to meet with us just once and it was awkward,” he recalls. “It was clear he knew literally nothing about Garbage Pail Kids. He was going to what he was going to do and Topps didn’t want us getting in the way.” Due to Amateau’s indifference to the film, Newgarden was convinced that it wasn’t going to get made. “I later saw some shots of makeup tests that had been sent in and remember my stomach turning,” he adds. “I was more or less in denial. It seemed impossible that this movie could ever really happen.”