Wargaming, developers of historical warfare MMOs, have announced that update 9.20 for their armoured warfare MMO World of Tanks is now available to download.   This latest update brings with it vehicle rebalancing for the vehicles of Japan, France, the USA and the USSR, epic 30v30 battles and the chance to earn bonds.  Watch the update trailers below to learn more… 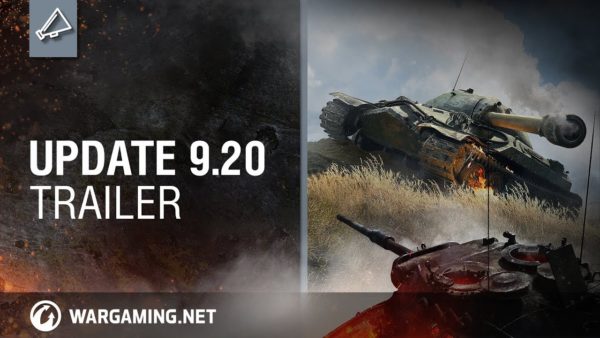 As mentioned above, the vehicles of Japan, France, the USA and the USSR come under the spotlight for vehicle rebalances which include the replacement of the French Foch (155) with the Tier-X Foch 50 B tank destroyer.  There have also been some slight changes to the German tech tree particularly the Maus, Mauschen and the 8.8cm Pak 43 Jagdtiger.

Fans of the Chinese tech tree will be pleased to see the introduction of 9 Tank Destroyers which were previously only available to Chinese players.  The lower tier vehicles have good viewing distance, high camouflage value and can pack a bit of a punch.  In the medium tier vehicles the mobility increases as does the armour and alpha damage.  Higher tier vehicles will find that they don’t pack as serious a punch as their counterparts they do have a good firing rate.

This update also addresses arty and the introduction of the new stun mechanics.  If the cover that your vehicle is in is 2+ meters thick then you will be safe from stun, however, variables have been added for being in different portions of cover.  The post battle stats will state how long you have been stunned.

Those who have been wanting larger battles will be excited to know that Update 9.20 introduces Grand Battles as part of an open test.  These are epic battles that will see 30v30 battles take place across giant battlegrounds such as the 1.4×1.4 km2 Nebelburg map.  This mode is exclusive to Tier X vehicles and will provide 3 spawn points per team, however, there is a limit of 4 artys per side.

Finally, those players engaging in Ranked Battles to earn Bonds will now be able to play their favourite Tier X vehicle in Random Battles, and the new Grand Battles, to earn Bonds.  Bonds can be used to purchase Directives and Improved Equipment.

Visit the World of Tanks website here for a full details on the changes.