If you are a fan of Voltron Legendary Defender created by Dreamworks for Netflix then you will love the announcement from Digital Domain that Voltron VR Chronicles will be coming to Playstation VR, HTC Vive and Oculus Rift on the 26th September.  A teaser trailer has been released which you can watch below… 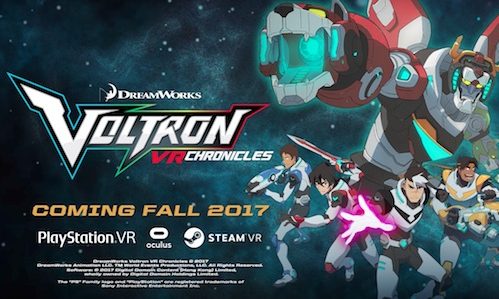 In Voltron VR Chronicles players take the role of Lance the Blue Paladin of Voltron and fight epic battles through time and space against the Zarkon’s forces.  As Lance players will have the opportunity to pilot the Blue Lion.  Players will be able to interact with other popular characters from the show which have been voiced by the show’s voice actors.  In this episodic storyline, players will be able to solve puzzles and fight their way through a variety of challenges.

“We are big fans of the Voltron franchise and wanted to create an experience that would captivate existing fans and also introduce the story in a compelling way for new ones,” said Wayne Kennedy, Digital Domain’s Director of Creative Development. “With DreamWorks Voltron VR Chronicles, we are pioneering the next evolution of interactive storytelling in a fully-immersive setting.”

Voltron VR Chronicles is available to pre-order now from the Playstation Network for PS VR.