At the close Game of Thrones “The Spoils of War” we finally witnessed the power of the Queen of Dragons, Daenerys Targaryen, as she let loose both hundreds of Dothraki Warriors on horseback and the mighty dragon Drogon upon the Lannister Army. 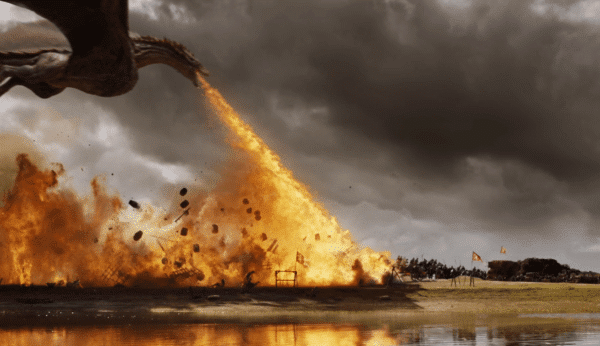 This brutal battle taking place at the Reach – on the way to King’s Landing – saw the Lannister Army, under the command of Jaime Lannister, either burnt to ash in mere seconds or torn to shreds by the might of the Dothraki.  If it wasn’t for the speed of Jaime’s constant shadow and the former Sellsword, now Ser Bronn of Blackwater, the King-Slayer would have been burnt to ash as he attempted to strike down Daenerys.

The below video, coming in at just under fifteen minutes, reveals not only behind-the-scenes special effects from this truly memorable battle, but numerous interviews with both cast and crew including Nikolaj Coster-Waldau, Emilia Clarke and Peter Dinklage.