Playdius and developer Splashteam have announced that their 2D platformer Splasher will be arriving on the Xbox One and Playstation 4 on the 26th September.  Splasher is a combination of platformer and action gameplay that sees players use paint for more than decoration.  Watch the release trailer below.. 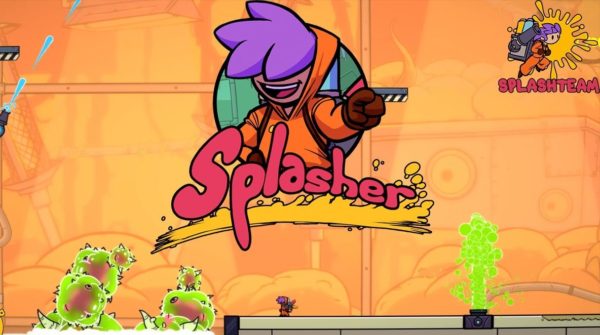 In the crazy cartoon world of Splasher players take control of a young purple haired hero who takes on the heroic act of saving the workers of a paint factory from its evil boss Le Docteur.  The workers of the factory, called Splashers, have been treated poorly for too long by Le Docteur and it is up to the player to save them using the Splatter Cannon, a special gun that fires different coloured paints and grants more special abilities throughout the game’s 22 levels.  These abilities will allow players to stick to walls, bounce the enemies in the air and even throw enemies into their own traps.

As well as progressing through the game’s challenging 22 levels in the story mode there are also Time Attack and Speed Run modes that provide the ultimate challenges and allows players to compare their scores on leaderboards.

Splasher will be available on Xbox One and Playstation 4 on the 26th September.