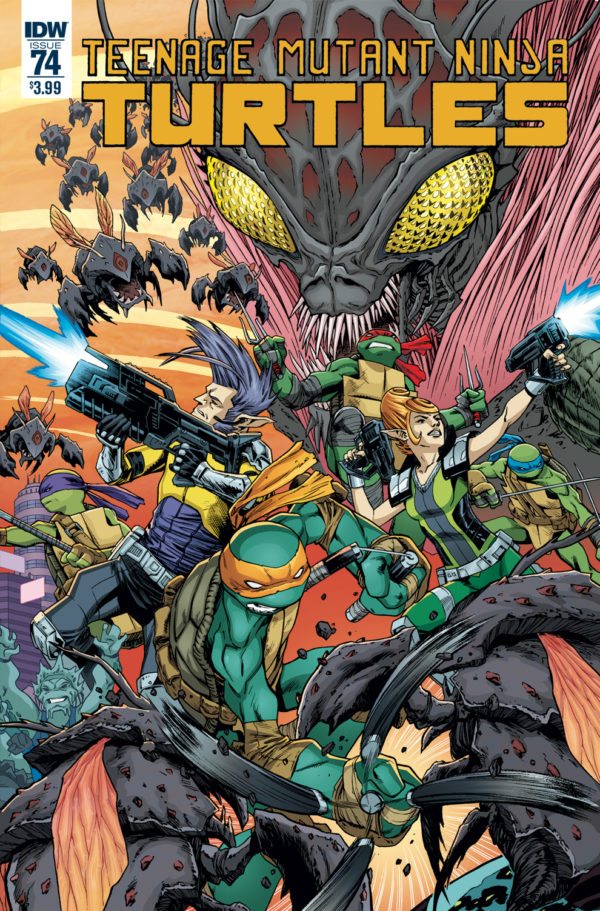 Having recently watched A Few Good Men, my bar for courtroom drama is set really high. I’ll try not to compare TMNT to Aaron Sorkin and Jack Nicholson.

Despite starting off with some pew pew action, TMNT #74 quickly settles into the courtroom setting, and I’m thankful. With #73 leading directly into the five part Dimension X series, and Universe doing its own thing, it’s been a busy time for IDW TMNT. I’m a bit tired! So to have a more measured, dialogue driven affair is welcome. That’s not to say I didn’t appreciate the pew pew, and the more malevolent aspects that come with Hakk-R; it just things easier to digest.

Speaking of Hakk-R, I’ve found that unlike the witnesses, who were given depth that can’t be gained in the main series. he’s (?) perhaps better the less I see. He’s a real threat; cunning, brutal, and actually quite funny. Maybe now he can settle back into a scarier role, but with what I learned about him providing a good base.

Can we talk about how sexy the various covers this month are? If you’re a cover collector you’re in for a treat! There’s a particular cool Raphael cover that you should check out if you can.

Back to the courtroom, and it’s not massively surprising what occurs. I knew Krang had to have something up his tentacle, but so far it’s more down to his representation doing a thorough job than anything nefarious. It works though; not everything has to be bombastic and it makes sense that Krang would have a top-notch lawyer in his corner.

I’ve discovered that next month’s issue is going to 40 page long! Lots of space to craft a compelling finale to this story I hope. With Hakk-R, Triceratons, Krang, Nutrinos, Honeycutt all involved, it’s a a pretty crazy time for the TMNT. Getting to #75 is quite the milestone, and one that IDW fully deserves to reach.