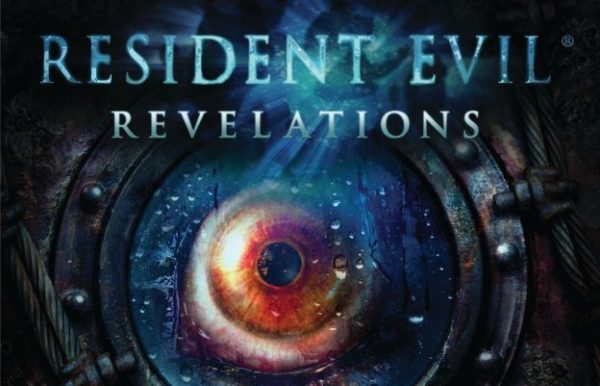 Since Capcom first struck gold in the PSX era with the original Resident Evil trilogy, the series has suffered an extensive, ongoing identity crisis. Resident Evil 4’s critical acclaim and influence caused the series to head further in that new direction, and has nervously skirted the border between survival horror and action third-person shooter genres ever since. Resident Evil: Revelations was created as a tentative experiment back into horror, while the main series continued down the  predominantly more action based path with Resident Evil 6. Originally released on the 3DS in 2012, the game was received incredibly well and is still known as one of the best 3DS titles – at least graphically – to ever be released. In Capcom’s new MO to port every recent game they’ve developed to PS4, Xbox One, the Nintendo Switch, the Atari Jaguar and your mum’s toaster, can this HD port of a 3DS game two generations removed really still be worth playing? Mostly, yes.

Revelations is based during the gap between Resident Evil 4 & 5, basically addressing what any character not named Leon has been up to. The story is based on bio-terrorism and an entirely different virus to the T-Virus and traditional ‘zombies’ don’t make an appearance. That leads to most thinking that’s why they tacked ‘Revelations‘ as the sub-title, to signify the entry’s significantly different subject matter, but that’s fairly typical fare for what was just a handheld spin-off at the time. In short, series regulars Jill Valentine and Chris Redfield are part of a counter-bio-terrorism group known as Bioterrorism Security Assessment Alliance (BSAA), who attempt to stop a terrorist cell known as Veltro from launching a world-ending virus. Not that it really bares thinking about. The story isn’t especially coherent for a game of its series, but it is incredibly hammy, ridiculous and obscure, which are exactly the reasons why I had a lot of fun with it. 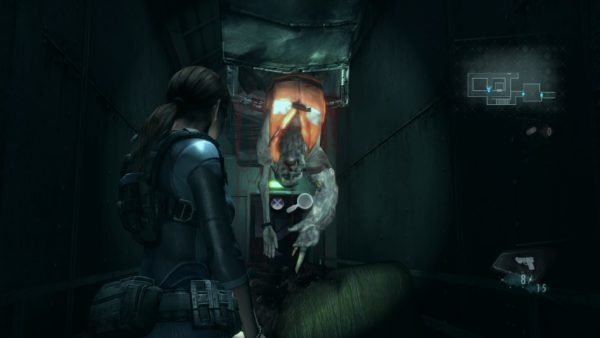 As you’d expect, resources are scarce in Resident Evil: Revelations, but it’s not as straightforward as you might have thought. Ammo, green herbs and grenades are fairly scarce and you will have to conserve, especially if you want to beat certain bosses down the line without struggling. However, the game also introduces the ‘genesis’ mechanic, which is a scanner that’ll reveal hidden items throughout the levels, while also providing you with free healing items after scanning so many enemy corpses. If you tend to scan every room as you pass, you should be fully topped up on ammo most of the time, most of the game’s gun upgrade parts are hidden in this way as well. It’s just an odd thing to do in a game like this, because it doesn’t feel relatively skillful, it’s more time-consuming than anything, but it does give you a reason to explore each zone as opposed to just fast-tracking it to the objective every time. The lay-out is also an odd one because it is exploration-heavy, but it also jumps about between several time-lines, characters and plots throughout the game’s 12 chapters, not always making a lot of sense. 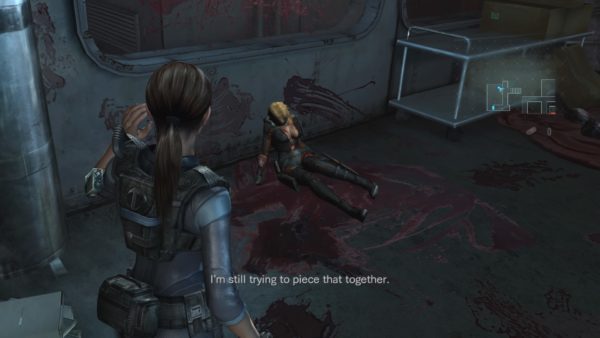 Revelations isn’t exactly ‘scary’, the enemy design is more abstract and gross this time around as opposed to scary. Although, the tone is kept dark and occasionally enemies will drop from the ceiling, behind you, which was absolutely terrifying. It’s seems hard to get the dichotomy right to the point where you can spook players, while actually giving them adequate tools to deal with a problem. If my pockets are chock-full of shotgun shells and grenades – I’m not going to fear most encounters. Saying this, Capcom go extra weird with enemy design choices this time and you’ll be consistently challenged throughout. Some of it feels like a genuine challenge, but as typical in survival horror games, some deaths and hard spots feel like total bullshit designed to drain your resources and put you on the back foot. I find it hard to argue with the concept too much because it does work and it is effective in making you panic, taking you out of your comfort zone and forcing you to take the next encounter a bit more seriously without a stock of heavy explosives.

Resident Evil: Revelations isn’t a fantastic looking game in terms of what’s available right now on next-gen platforms, but that’s a mute point. It was originally a 3DS title, ported to last gen, now ported to this gen, all things considered it actually looks pretty good for what it is. The £20 pound price point is also a fair price for this, considering there’s probably a good 12-hours of campaign here, alongside the game’s co-op raid mode which isn’t exactly deep, but it can be fun with a pal for an hour or two. 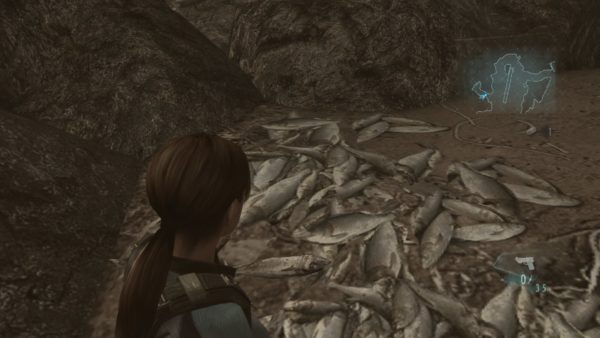 Not the greatest next-gen texture I’ve ever seen..

Overall, RE: Revelations is better than it has any right to be, possibly one of the best games in the series certainly in terms of modern RE releases. It’s a tightly controlled, action/horror third person shooter that will challenge and impress, though visually you shouldn’t expect that much given the game’s history. Go in with reasonable expectations, and be you’ll be pleasantly surprised.