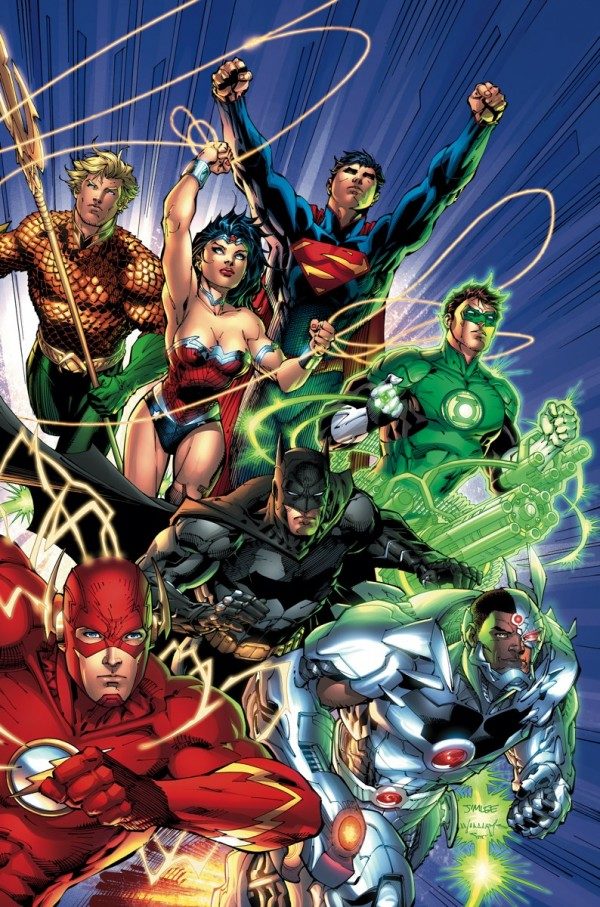 With Justice League hitting theatres in just over a month, DC is putting out some old material to time with the film’s release and nothing is more timely than an Absolute printing of The New 52’s flagship title and kick off, Justice League. Absolute Justice League: Origin collects issues # 1 – 12 and a bit of #0, the first two story arcs from comic superstars Geoff Johns and Jim Lee that captures Lee’s artwork in all of its awesome glory.

Justice League: Origin is perhaps one of the strongest influences on the Zack Snyder/Joss Whedon film, having six of the seven Justice League members in the film featured here as well as an invasion from the forces of Apokolips that forces the heroes to work together. Johns writes the team very well, showing how they first came together in this new continuity that keeps most of the relationships from the old continuity intact.

Johns balances the team fairly well, giving each member a big (or several big) moments throughout the story. Though in ‘Origin’, it does take a little while for the full team to get together, as Wonder Woman makes her appearance in issue #3 and Aquaman in #4. However, this does help spread things out and not feel quite so rushed as Johns’ takes his time introducing the heroes and building up the relationship between them, Batman and Green Lantern in particular.

The second arc in the book, ‘The Villain’s Journey’, flashes forward five years later where the Justice League has saved the world countless times and are regarded as heroes/celebrities/gods across the world. This has some people miffed, though, such as one survivor from Darkseid’s invasion who views the Justice League to blame for his family’s death and works to destroy them as a team and their reputation among the public.

‘Origin’ is a straight up action story as the heroes fight off hordes of parademons before engaging with Darkseid himself. There are a lot of memorable moments in this story, from Superman’s brief fight with Batman, Green Lantern and Flash, Aquaman summoning sharks to Wonder Woman dealing a big blow to Darkseid. Lee’s artwork is gorgeous, showcasing the blockbuster aspect of the event with a lot of cool splash pages that takes full advantage of the Absolute format. The story may be a bit thin (all it is is preventing Darkseid’s destruction of Earth after all), but the action and John’s character work elevates the story.

‘The Villain’s Journey’, meanwhile, is much more of a contemplative look at the League and the rest of the characters, showing their tumultuous relationship with the world’s governments as well as the tenuous relationship between some team members. One of Johns’ focal points of this story is examining Wonder Woman and Steve Trevor’s on/off again relationship, with the villain using Trevor as a key piece of his plot against the League, but it also leads to the controversial relationship and kiss between Superman and Wonder Woman, which came somewhat out of the blue. Lee’s artwork again shines throughout this story, but doesn’t have as much epic moments as ‘Origin’, but he still creates some nice imagery between the team.

As one of the most defining modern stories, fans of Johns and Lee will enjoy Absolute Justice League: Origin and pouring over Lee’s great art with the larger page size. It is definitely a good time to revisit the start of Johns’ New 52 run on Justice League as we get closer to the film’s release.