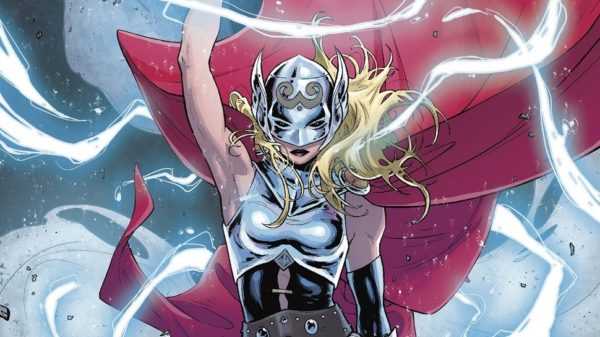 Chris Hemsworth’s Thor is just about to get a much-needed reinvention in Taika Waititi’s upcoming Thor: Ragnarok, but already questions are springing up about a female Thor. During the press-tour for Thor: Ragnarok, Monkeys Fighting Robots got a chance to chat with Karl Urban — who plays Skurge — about his experience working on the film. One of the questions levelled at Urban was his opinion on a female Thor, to which the actor replied:

“I think it’s time. I think it’s well overdue, absolutely. I’d like to see that movie, why not.”

Comic fans will know that this idea isn’t out of the question, either, as Jane Foster actually took up Mjolnir in the comics to become the first female Thor. It doesn’t necessarily have to be Jane Foster, as the Marvel Cinematic Universe is its own thing, though it would be interesting to see her return. What do you think of the prospect of Natalie Portman playing Thor?

UPDATE: Chatting with Movies.com, Marvel’s Kevin Feige was asked about the very possibility of a female Thor in the MCU, responding that: “We always look back to the comics to get those ideas … sometimes very specific storylines like Civil War, sometimes just nuggets or characters like Planet Hulk. So anything that’s happened in the comics, even a female Thor, become great potentials and the ideas from which future movies can be born.”

Thor: Ragnarok is being directed by Taika Waititi (What We Do in the Shadows) and features Marvel veterans Chris Hemsworth as Thor, Tom Hiddleston as Loki, Anthony Hopkins as Odin, Idris Elba as Heimdall and Mark Ruffalo as the Hulk alongside Cate Blanchett as Hela, Tessa Thompson as Valkyrie, Jeff Goldblum as the Grandmaster, Karl Urban as Skurge and Sam Neill in an as-yet-unrevealed role. It is set for release on November 3rd, 2017.