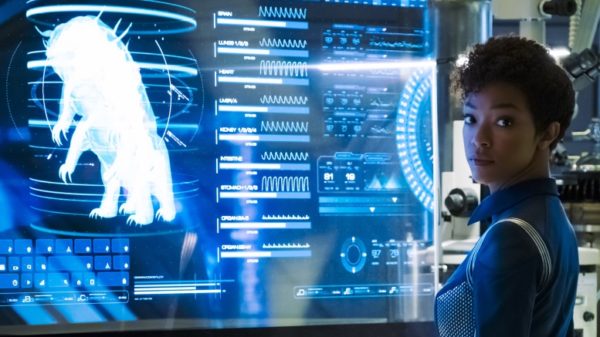 There’s an obvious parallel – obvious to the point of being heavy-handed, really – being drawn between the tardigrade and Michael Burnham in this episode.

The tardigrade is misunderstood; it’s believed to be dangerous, a predator, something to be feared. It’s responsible for the deaths of Starfleet officers, and it’s being drafted into the war – a weapon to be used rather than an individual to be understood. Burnham, of course, is much the same; when she comments that the creature “can only be what it is, not what you want it to be”, it’s an implicit rebuke of the prevailing perception of her. As she notes that the Discovery crew “judge the creature by its appearance and one single event from its past”, it’s a comment that is fundamentally about herself, and the way she’s now perceived.

Of course, it transpires in the end that the creature isn’t a weapon – it’s docile in its own right, and in fact its primary use to the Discovery ship is a scientific one. As the creature proves its worth, so does Burnham; it’s the same moment of triumph and of success for them both, allowing them to find a place on the ship. One can take it as something of a microcosm for Starfleet, really; an indicator of how, in the context of this war, they’re losing sight of what exactly they’re meant to be. When confronted with a new life, the response must be curiosity, rather than an intent to militarise; no doubt this is a thread that will continue across the rest of the series, grappling with the dichotomy between Starfleet’s true mission and the role it’s thrown into.

In light of this, then, it’s interesting to consider the implications of Georgiou’s last will and testament. Her perception of Burnham is outside of the context of her mutiny and the events on the Shenzhou; it’s a reminder of how she used to be. The significance of the telescope is obvious, then – a gift that symbolises seeking knowledge. Seeking new life and new civilisations. It’s a final note that emphasises just who and what Burnham is; first and foremost, a Starfleet officer. The telescope offers an opportunity to seek redemption.

Undoubtedly, it’s heavy-handed symbolism. But as a way to frame Burnham’s character arc, it’s effective in its bluntness. 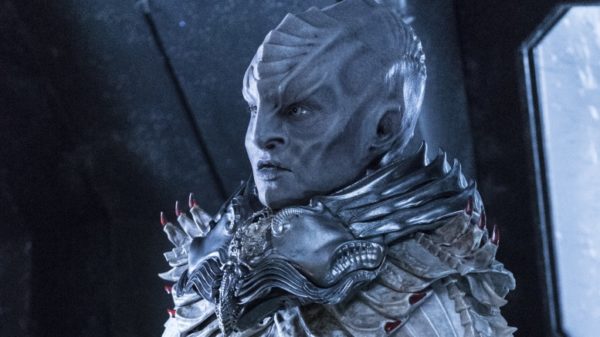 This episode returns to the Klingons’ plotline, here essentially independent of the Starfleet characters; it’s the first indication that this is as much the Klingons’ show as it is that of the Discovery crew. It’ll be interesting to see whether this continues going forward – certainly at this stage there does remain a slight feeling that the Klingons are a little ancillary to the broader storyline, but no doubt as it continues they’ll feel more integral. Voq has been positioned as an analogue to Michael Burnham across the series thus far; both outsiders, both losing their mentor. With that in mind it’s interesting to consider how his journey continued to parallel that of Burnham’s, effectively continuing to mirror and invert her arc – what forms is an interesting dichotomy, which will no doubt be explored further to emphasise the divisions between Klingon and Federation society.

The internal machinations of the Klingons are, admittedly, more than a little simplistic – something of a running theme for this episode, perhaps. A greater bother, though, is how this undercuts the potential represented by ‘A Vulcan Hello’ – ultimately, the Klingons effectively remain a monoculture. The furthest that Discovery has been able to develop them beyond warriors is as religious fanatics, who also want to eat – both in the context of their war. Neither exactly goes as far as to characterise them to the extent of the Discovery crew; while L’Rell wants to have the freedom to operate politically, or Voq wants to honour T’Kuvma, it always comes back to the war and their status as a warrior race. While the Starfleet crew is undoubtedly still at a fairly early stage in their development, there’s also a much greater range of characterisations; from the enthusiastic and ambitious Ensign Tilly who wants to be a Captain, to the prickly Lieutenant Stamets who resents how the militarisation of his research, to Burnham’s search for redemption and Lorca’s drive to win the war, there is a much greater breadth of characterisation for these characters.

Certainly, there’s the matter of timing; the Starfleet crew have had far greater focus placed upon them. And, of course, while it is still early, steps are being made – the conversation between Voq and L’Rell where he admits his doubts and asks if she shares those concerns do go a long way towards shaping these characters and grounding the Klingons as people rather than just aliens. Nonetheless, there’s a need to go further with this, and sometimes it’s difficult to tell whether there’s much commitment to that end. 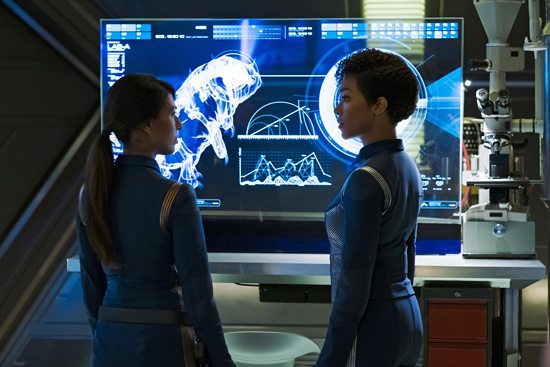 There’s one obvious concern that jumps out, though – the death of Commander Landry.

As previously discussed in the review of ‘A Vulcan Hello’, much has been made of how the Star Trek: Discovery production team are pursuing a Game of Thrones model of storytelling, hoping to mimic the HBO epic’s inclination towards surprise deaths. While executive producer Alex Kurtzman insists that “no one is going to die without a good story reason” it’s difficult to see how the demise of Commander Landry is in keeping with that rule. Certainly, there’s no new information her death establishes given we’ve already seen how the creature is dangerous; further, her death is reliant on her making some poor choices that seem to exist only to set up her death.

A couple of different problems stand out. First and foremost, there’s a misunderstanding of what it is that makes a death meaningful in a drama – it’s not the surprise, not at all. Rather it’s the audience’s connection to the character that matters, and in this case, there’s not been the time to form such a connection. It’s a massive shame, really; the character seemed as though she had a lot of potential, and in story terms it feels as though killing off the character represents a greater loss than what was gained.

More troubling though is the fact that both of the major character deaths so far – outside of redshirts and villains, that is – have been woman of colour. While you can argue that the death of Captain Georgiou did have ‘a good story reason’, the death of Commander Landry very much did not. It’s status as fridging is diminished only by the fact that it isn’t a particular motivating factor to the characters, given that none of them seemed to care particularly. (Another reason why this death doesn’t land – there’s no exploration of its impact on the other characters.) With the implicit possibility that Burnham is set to assume Landry’s role as tactical officer – or that it’ll be taken by yet to be introduced male character Ash Tyler – that’s the second WOC character killed off to further the development of others. It’s the beginning of a worrying trend, particularly with the revelation that Georgiou was picked apart and eaten by Klingons; with two major female characters killed in particularly gory ways, Discovery is running the risk of throwing away the credit it gained for having such a diverse cast in the first place.

Ultimately, this was perhaps the weakest of Star Trek: Discovery’s first four episodes. Not that it was weak on its own terms, exactly, but it was decidedly simple – and demonstrates fractures in the show that could grow to major faults if not dealt with soon. ‘The Butcher’s Knife Cares Not for the Lamb’s Cry’ was still an entertaining hour of television, but hopefully it’ll be looked back on a blip rather than the new standard.