With Halloween just around the corner Team17 and Mouldy Toof have released The Wicked Ward DLC, a brand new spooky prison to escape from in their sandbox hit title, The Escapists 2.  This brand new DLC is available now for the Xbox One, PlayStation 4 and PC for £2.79 / $3.99 / €3.99.  A trailer has been released to celebrate the release and can be seen below… 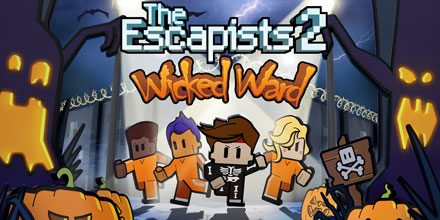 In The Wicked Ward DLC an eerie night sky echos with thunder and the sound of rain as flashes of lightning briefly light up the spooky outline of the old abandoned hospital that players will need to escape from.  Don’t expect escape to be easy as the grounds are patrolled by the undead and the prison is run by a mad scientist.  As with every prison players will need to craft, fight and scheme their way to freedom.  There will be a variety of new items and craftable recipes included in the DLC that will help players escape the nightmarish prison.

This latest DLC will also include new Halloween themed customisations for players to enjoy.

Things have taken an odd turn in the locked off wings of an abandoned hospital. A mad scientist and his hoard of undead guard their terror-tory within the gothic halls. Outside an ominous sky of thunder, rain and lightning blankets the surrounding woods. Once again, you’ll have to craft, fight and scheme your way to freedom from this spooky supernatural slammer. Your ghoul is to escape at all costs!