Ricky Church continues his countdown to Justice League with Injustice: Gods Among Us…

One of the more common complaints about the DCEU – specifically Man of Steel and Batman v Superman: Dawn of Justice – is that it is too dour and lacks the hopeful feel of the comics. Its got nothing, though, on the alternate world of the video game Injustice: Gods Among Us, which envisions a world where Superman and other members of the Justice League rule the world with an iron fist as Batman fights against them.

After Injustice‘s Joker tricked Superman into killing Lois Lane, their unborn child and most of Metropolis, the Man of Steel ripped the Clown Prince’s heart out in retaliation. In his grief, he became convinced he and his allies needed to take a firmer grasp on the world’s law and order to prevent anything like this again. Flash-forward five years later and Superman is Earth’s High Chancellor with most of the Justice League now known as the Regime, allying themselves with the likes of Sinestro, Bane and some other villains while Batman leads a resistance on the run.

The game’s plot sees the regular versions of Batman, Wonder Woman, Aquaman and a few others transported to the strange, dangerous world by Resistance Batman and Lex Luthor (in this world an actual good man instead of villain) to help take down Superman’s Regime. Its the worst case scenario if Superman and the League ever did turn against the world and enforced their will with any chance of beating them being slim to none.

Aside from being a fun fighting game with some of DC’s best characters, the game’s story was surprisingly good and well-thought out. The questions it posed were interesting and the character’s development – both the real versions and Injustice versions – were well done, particularly Superman’s slide into real villainy. His actions at first were borne out of fear and the terrible grief he suffered. One piece of dialogue between Superman and Batman is one of the best moments of the game, where Batman reminds Superman crime took his parents just for Superman to retort “But you weren’t the gun”, highlighting the pain and guilt that lingered within him. 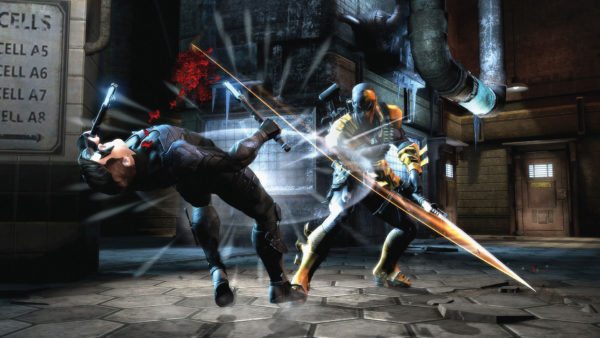 Once it all starts falling apart for his Regime, though, that’s when he turns into a truly vengeful tyrant, likening the people of Earth to children acting out and gives orders for a massacre to put them in line. When the real Superman steps into the Injustice universe, its a stark contrast between the two very different men and how far Regime Superman has fallen.

The battle between the real League and the Injustice versions highlights the hopefulness and goodness of the real DC universe. In the interactions between the League members, there’s a real sense of camaraderie and history between them, but perhaps that’s because the voice cast is made up primarily of actors who have played these character for years. Fans of the DC Animated Universe will get a kick out of hearing Kevin Conroy, George Newborn and Susan Eisenberg voicing Batman, Superman and Wonder Woman respectively. These three are a trinity of their own as they are always willing to come back to these characters when the opportunity arises (check out my piece on Justice League Unlimited‘s Cadmas Arc for more on the DCAU).

If you want to dive further into the world of Injustice, DC made a series of prequel comics detailing the five year gap and Superman’s rise to villainy. Injustice 2 was also released this past summer and rather than focusing on the real DC heroes, it actually continues the Injustice storyline as it picks up years later and Batman and Superman are forced to work together to stop Brainiac’s invasion of Earth.

Most fighting games have a pretty thin story, but Injustice: Gods Among Us actually goes fairly in-depth with the possibilities of this alternate universe and its character development. The dourness of the Injustice world reminds us of the hope that exists within the actual DC Universe and how that defines many of the characters. Its also a nice reminder of Superman’s importance to the League and the rest of the world.