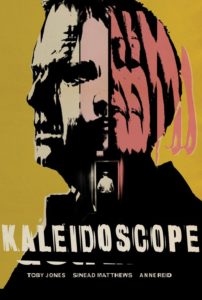 A lonely middle-aged man ventures into the world of internet dating, only to discover that his first date isn’t all she seems.  The arrival of his mother marks the return of bitter memories and the start of something close to a nightmare.

If you had a kaleidoscope when you were a youngster, you’ll remember it well: the simplest of ideas creating ever-changing, complex images.  A tube that twisted so that the contents morphed into different shapes and patterns.  Twist by twist.  No two were ever the same.

Just like the images that Carl (Toby Jones) sees through his mind’s eye as he looks around his claustrophobic little flat.  And he has an actual kaleidoscope tucked away among his few belongings.  Home is a council flat, with its 70s tiling and charity shop furniture.  Nothing matches, but it all functions and that’s all that matters.  He decides to dip his toe into online dating: his neighbour takes pity on his solitary white shirt and loans him something much more extrovert for his date.  He brings Abby (Sinead Matthews) home and it opens the door into his past and his present.  But his date has another agenda and starts searching his flat for anything valuable. Later, after passing out on the sofa, Carl discovers her body in his bathroom ….. 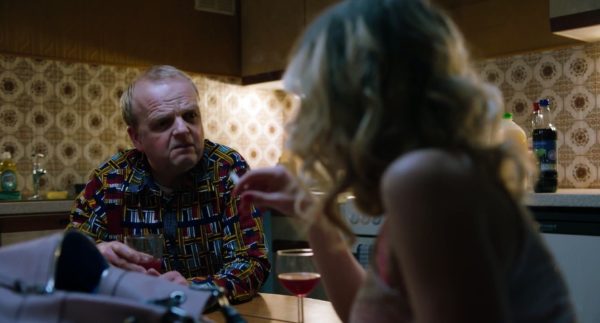 Director Rupert Jones has an eye for the little details and his first feature is littered with them, all designed to fill in Carl’s back story.  The prison library books, the jar labelled “Van Can” half filled with money and the various plants and seedlings dotted around the flat.  A man with a past who’s trying to get his life back on track, although why he went to prison is never explained.  Perhaps most telling of all is the message on his answerphone, the voice of an elderly lady suggesting a visit.  His reaction is unexpected, a mixture of horror and anger and, in hindsight, it’s the tipping point.

While Kaleidoscope isn’t the kind of film to make the hairs on the back of your neck prickle, it certainly makes your brain tingle: it’s never completely apparent what’s happened.  You’re left to draw your own conclusions.  But certain things are clear.  Carl’s relationship with his mother Aileen (Anne Reid) is fractured beyond repair.  The actual cause is never explained, but her dominant personality clearly plays a part, and it’s affected his attitude towards women – or, at least, those who he tries to get close to.  He has a friend in neighbour Monique (Cecilia Noble) who cooks for him and generally helps out, but a friend is all she is.

Carl’s relationship with his mother immediately conjures up images of another film.  Psycho.  Admittedly, he’s substantially more sympathetic than Norman Bates, but there is a ring of Hitchcock about the story.  And some of the cinematography, especially the spiral staircase leading to Carl’s flat, reinforces those thoughts.  The movie may not be in the same league as Psycho, but it does have something that stands out.  A couple of top-notch performances.

Not that you would expect anything less from actors of the calibre of Jones and Reid.  While he mixes vulnerability with the sense of somebody who has little control over his life, let alone what happens inside his head, Reid delivers a chilling performance strikingly at odds with her usual Last Tango In Halifax style.  The most mundane of lines are laden with icy coldness and layers of meaning, topped off with a smile that stretches her lips but never, ever gets anywhere near her eyes.  Individually, the two are excellent: together, they’re electrifying.

The film itself doesn’t quite reach the heights of its two main actors, although its inherent ambiguity creates a certain amount of tension in its own right.  As the end approaches, you think you’ve worked it out, just like the director wants you to.  Have you?  Watch and learn…