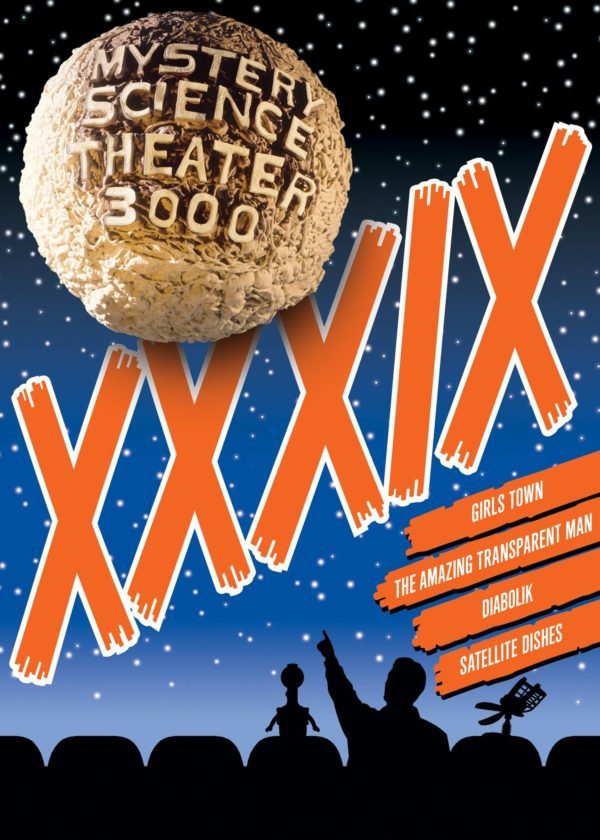 MST3K Volume XXXIX is a bittersweet release because it marks the end of an era. Yes, this is Shout! Factory’s final new volume of Mystery Science Theater 3000 episodes. (They’ll keep re-releasing the old Rhino sets, however.) They say on their site that it’s the “almost certainly, probably definitely, maybe unquestionably final collection of never-before-released episodes,” so maybe there’s still some hope of more volumes in the series. Maybe?

Fittingly, this collection includes the show’s final episode, which skewers the 1968 spy film Diabolik, which was produced by Dino de Laurentiis. That one probably would have been worthy of a retrospective featurette, but the subject was understandably pushed aside in favor of Showdown in Eden Prairie: Their Final Experiment (10 minutes), which looks back on the making of the final episode.

The series finale sees Mike and the bots finally get their chance to escape Pearl Forrester’s clutches after she buys a joystick from Radio Shack (haha, it’s funny because they’re gone now) and uses it to send the Satellite of Love into a dive and make its inhabitants nauseous. The joystick breaks, though, and the ship goes into a death spiral toward Earth.

The host segments involve Mike and the bots making plans for what they’ll do when they escape, which, unsurprisingly, involves the three of them sharing an apartment and mocking old movies on TV in the final scene. In a very Seinfeld-esque move, they watch The Crawling Eye, which was the subject of the first experiment when the show moved to Comedy Central.

That disc also includes The Last Dance, 76 minutes of behind-the-scenes footage from those final days on the show. Some behind-the-scenes stuff has popped up here and there over the years, but I don’t recall it ever being delivered in a concentrated burst like this. Enjoy, Misties. The Diabolik trailer rounds out the disc.

To those who say “But wait! There are still episodes that haven’t been released on home video yet,” Shout! says, “Here’s Satellite Dishes. That’s the best we can do, folks.” That disc includes the host segments from 11 episodes whose rights remain elusive. If you have a friend whose cousin’s financial planner’s fraternity brother from college is buddies with an intellectual property lawyer who’s willing to help work out the issues here, I recommend referring them to Shout! Factory. (Don’t say I made the referral.)

The Satellite Dishes platter also serves up Behind the Scenes: Daniel Griffith on Ballyhoo, an 18-minute interview with the guy who created many of the featurettes on Shout! Factory’s MST3K sets. I’ve always appreciated the effort and creativity Griffith put into his work on these volumes, and I hope he has a long career doing what he loves. Perhaps he’ll get to reprise his role when (if?) the new MST3K episodes find their way to home video.

Two other episodes round out this set. The first one is The Amazing Transparent Man, a sixth season episode with Mike. It’s a black-and-white science-fiction film from 1960 that’s perfect for riffing. A 1955 short called The Days of Our Years advocates for railroad workers to be careful because bad things might happen to them and their employer, Union Pacific, has no responsibility in such matters. It’s a heartwarming story.

An 11-minute featurette, Beyond Transparency, charts the story of The Amazing Transparent Man, which was made because wealthy mid-century Texans needed tax shelters for their oil money, so some of them started funding movies. However, such deals often turned sour as the money began to run out (I suppose those wealthy Texans didn’t want to spend too much of their cash on silly endeavors), and this movie ended up being repossessed by the lab that was developing the film. I wonder how that kind of repo job goes down.

The final movie is Girls Town, another sixth season episode. It’s a 1959 MGM release about a girl framed for murder and sent to a reform school run by nuns. Mel Torme and Mamie Van Doren star in it, as do Charlie Chaplin, Jr., Harold Lloyd, Jr., and Robert Mitchum’s son, James. Paul Anka makes his film debut. How such a ridiculous movie ended up with that kind of cast is beyond me.

Unfortunately, there’s no featurette that fills in the back story here. Instead, we have an eight-minute piece that covers Chuck Love, who composed the MST3K theme song with Joel Hodgson. I’m not knocking the choice of subject matter – it’s a good interview. I just wonder why Daniel Griffith and Ballyhoo weren’t turned loose on this one.