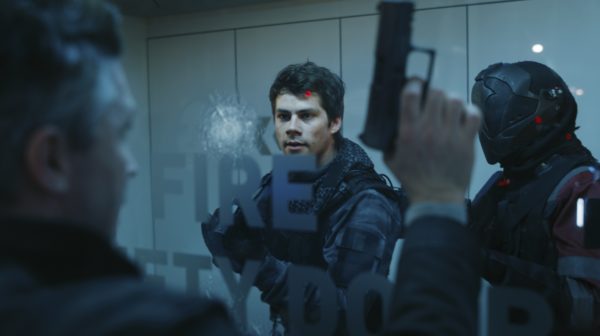 Dylan O’Brien has put that much-publicised accident on the set of Maze Runner: The Death Cure behind him, but as he chats about the final instalment of the trilogy, he admits the experience influenced the way he plays Thomas, the leader of the Gladers.

In London to launch the final cinema outing for the franchise, and his last appearance as Thomas, he talked to Flickering Myth’s Freda Cooper about the similarities – or not – between him and Thomas and how his character has developed over the course of the three films.  He also chats about working again with Will Poulter, who makes a re-appearance as Gally, and looks ahead to the possibility of switching from acting to directing in the future – or, at least, doing something less physically strenuous.

In Maze Runner:The Death Cure, O’Brien reprises his role of Thomas, leading the Gladers from the previous two episodes to find a cure to the deadly virus known as Flare – and to stop WCKD in its brutal attempts to eradicate the disease.  It means infiltrating the Last City, which is a maze in its own right and which threatens to destroy them all.

Maze Runner: The Death Cure is out in UK cinemas on 26th January.  Read our review of the film here.