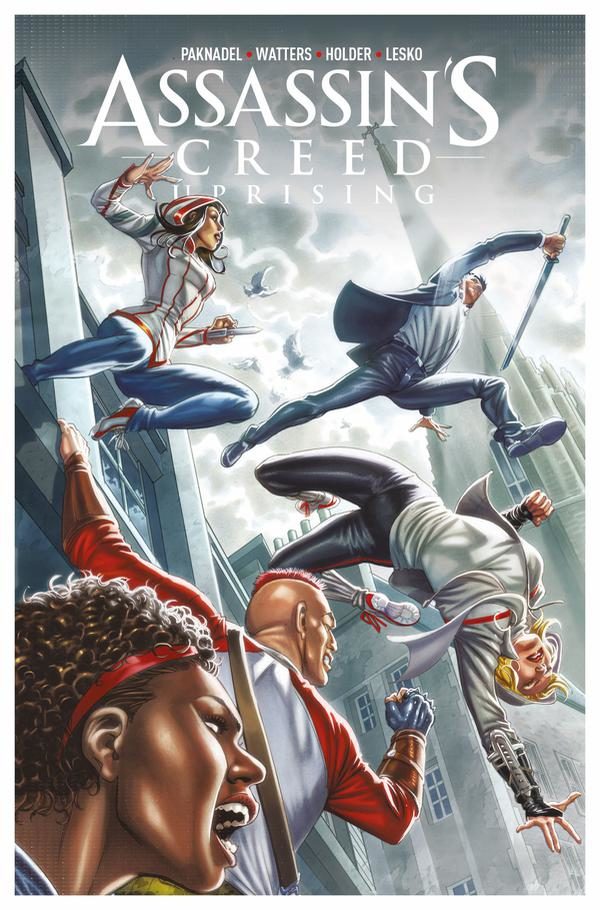 Uprising is the combination of a few story arcs merging together in the Assassin’s Creed Chronicles – though it does reference one story arc in particular that is close to my heart, that is The Black Cross. The reason it is close to my heart is the fact it was one of the first ever series of comics I ever reviewed and it was for Flickering Myth.

The story is centred around a hunt for the legendary diamond the Koh-I-Noor,one of the first civilisations artefacts. The story sees the new Templar Black Cross, Osto Berg, emerging to work with the Templars as he believes his own faction to be unreliable. His reasoning is that he knows he cannot trust any and all Assassins but he does not know what Templars he cannot trust.

This volume of Uprising finally seems to make the series’ “Big Bad” Juno an actual character in the story and not just some device used to confuse game players. The story arc that seemed to be left hanging at the end of Assassin’s Creed 3 is finally making some progress – in fact this is probably th most the modern day Assassin’s Creed story has developed in years.

The latest faction of Juno followers who are not tied to either the Assassins or Templars are the most well equipped and dangerous out of the three factions at the moment. Though if the Otso and the team of Assassin’s stick together and keep the uneasy truce running that little bit longer, this story could genuinely turn out to be the most interesting Assassin’s Creed development since its conception.

We are bounced about through more history, this time focussing on the Spanish Civil war. Though the team eventually find out what significance the period’s Assassin ancestor has in the war of the pieces of Eden, this is where the Black Cross story line converges. The set pieces in Spain are interesting and filled with more deception and turns than you can shake a stick at, and make for enjoyable reading with good pacing.

The historical story left a reader satisfied but confused once again with the amount of names you had to learn for a short period of time with the characters.

Overall the Uprising story is the most refreshing and original take on an Assassin’s Creed story to date, and with the next volume focusing on the Pheonix Project it will be hopefully carry on the momentum built but its previous volumes.