Thanks to the success of Blood Bowl on consoles and PC, Cyanide Studios have announced that they will be performing magic on yet another of Games Workshop’s board games, this time travelling to the 41st millennium with Space Hulk: Tactics. 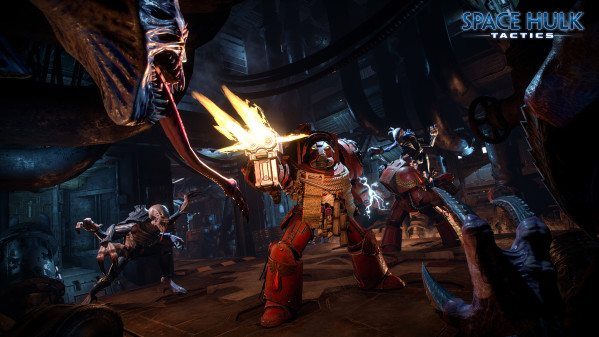 The Space Hulk board game took a squad of Terminator Space Marines into an alien infested mass of asteroids, wrecked ships and debris ejected from the Warp.  Within this hulk players would face the attacks of the deadly Genestealers, a species of Tyranid aliens intent on consuming life on every planet they discover.

Space Hulk: Tactics will use the same rules as the classic board game but it has been given a fresh new spin with the introduction of the card system.  These cards will provide ways to customise squads and troops and also provide abilities.

There will be two distinct, narrative driven campaigns each providing a different point of view from two factions; one campaign will put players in charge of a squad of Blood Angels Space Marines whilst the other will place players in control of the Genestealers.

There will also be plenty of opportunities for players to test their skills against other players thanks to an expansive online competitive multiplayer.  There will be plenty of multiplayer modes and tools to help provide a rewarding gaming experience including an intuitive map creation tool and the ability to play as other Space Marine chapters such as the Ultramarines and the Dark Angels.

Space Hulk: Tactics will be available for the Xbox One, Playstation 4 and PC later this year.