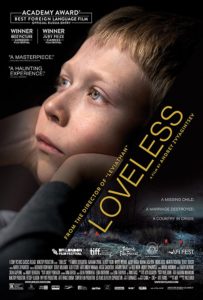 A couple going through a divorce must team up to find their son who has disappeared during one of their bitter arguments. 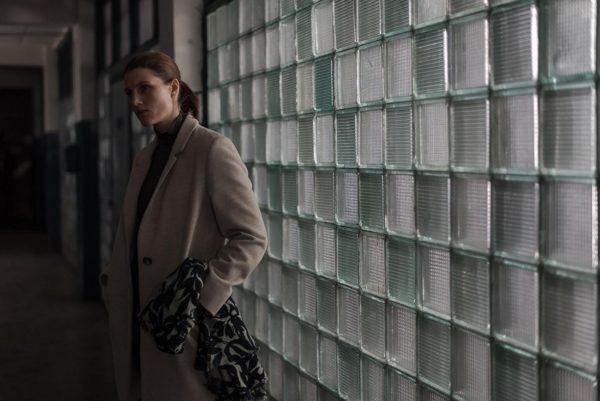 Loveless issues two stark warnings to its audience: don’t let your resentment for another render you without love for anyone, and don’t trust movie trailers. While the film’s two-minute long preview promises a dark, haunting, thriller, what the film delivers is a politically charged quagmire of despair that isn’t half as clever as it thinks it is.

The film’s opening minutes are composed of long, static wide shots and silence, which give fill the audience with a palpable sense of unease. After the silence breaks, we are introduced to Alyosha (Matvey Novikov), son of Zhenya and Boris (Maryana Spivak and Aleksey Rozin) and perhaps the only likeable character in the movie. From there we are introduced to his parents. The first we see of Zhenya, she is berating her son for neither cleaning his room nor introducing himself to the couple looking to buy the house. She slaps the back of his head, and is generally insufferably horrible. Boris, on the other hand, comes across as a kind of deadbeat-dad; working, but nonetheless absent-minded of his son’s wellbeing. He’s hardy likeable, but at least he’s better than his soon to be ex-wife. Or so it seems.

Shortly after the couple leave, Zhenya and Boris argue over who will look after Alyosha after the divorce, with neither one wanting to keep him. This is perhaps the best scene in the movie, as it successfully introduces to the characters while also delivering one of the film’s most heart wrenching shots. 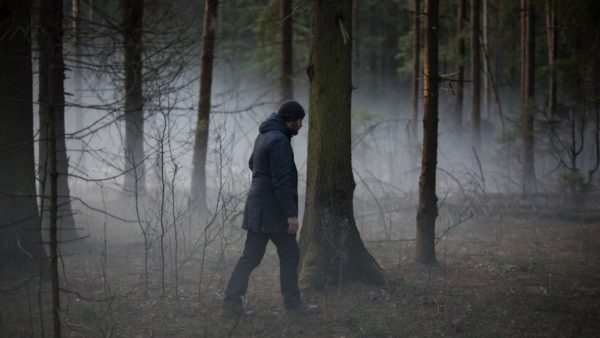 There are a number of other good establishing scenes in the first act. One scene, which shows Boris as he chats about the implications of a divorce with a co-worker, is both effective and clever. Done all in one take and with a totally static camera, the two really get to show off their acting chops as they discuss the strangely conservative Christian work environment their boss has created.

Unfortunately, these static shots and long dialogue scenes get old, fast. Good acting can only hold an audiences interest for so long before they pine for some movement. As nice as many of the static shots are, they are not nearly interesting enough to hold an audience’s attention for the five minutes that some of them are dragged out to. And though I don’t think it’s necessarily right to criticise the film’s dialogue when I have to rely on subtitles, there really isn’t anything spectacular about it, at least not in English.

This combination of inert camerawork, silence, and unspectacular dialogue sets the stage for a film that is dark, and even reasonable subtle, but hardly poised to entertain. Unfortunately, we haven’t reached the film’s worst part: the character development. 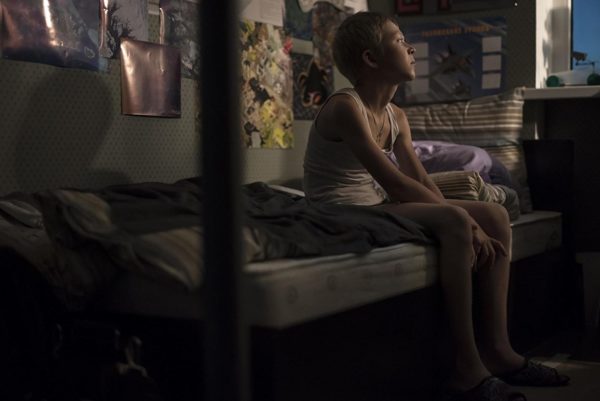 By the end of the film, neither Boris nor Zhenya have changed. There is nothing inherently wrong with this. Loveless wishes to convey a sense of nihilism (about modern day Russia or about the entire world? I’m not so sure) so it seems fitting that neither character’s actions have any impact on their own development. However, at no point during the film is there even the hint that they might change. This is not a tragic story of people going full circle, it’s just a story about people who never change. There is no tragedy or surprise in their failings, as there was never a glimmer of hope. As true to life as their non-arc might be, it’s hardly worthy of artistic credit.

While we’re on the subject of Loveless’ nihilism, to its credit, the film does do a good job of portraying the hopelessness of the world that the characters inhabit – a world that I assume Andrey Zvyagintsev sees as very real. The only help Zhenya and Boris receive in the search for their boy comes from a volunteer service, as the police have bigger fish to fry. Though this service does seem to offer light to this dark world, neither parent takes this light for themselves, nor does it ever seem like that light will last once the search is called off. However, I would argue that this portrayal is not nearly as clever as many critics think it is. Though it is certainly effective and worthy of praise, simply shedding light on what is not nearly as illuminating as expressing what should be.

Loveless is an undeniably tragic story that does a good job of uncovering the darker side of human nature and society. However, it feels static, directionless, and obsessed with a message that lacks a conclusion.