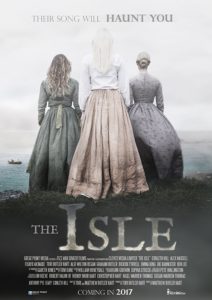 When three survivors of a shipwreck off the coast of 1840’s Scotland wash up on a sparsely populated island, they’re taken in by the residents before they can be rescued by the mainland boat. While housed in the residence of Douglas Innis (Conleth Hill) and his daughter (Tori Butler Hart), the trio soon discover that things aren’t what they seem on this idyllic isle, with songs on the wind, an things going bump in the night. 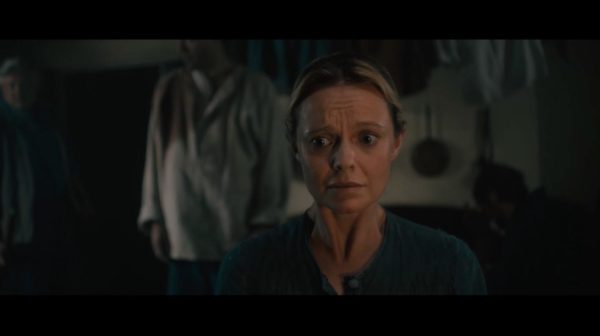 The songs of sirens are one of those myths and legends that’s never really been prevalent in cinema, but Matthew Butler Hart’s period horror uses them as a foundation upon which to build this creepy derivation of The Wicker Man.

Hart, who wrote the screenplay alongside wife Tori (excellent as one of the isle’s most pivotal inhabitants) drip feeds information throughout the course of the film, and is particularly successful with the way in which it weaves in a historical flashback. Horror always benefits from a patient approach over that of the simple jump-scare, and The Isle sets about bumping your geese by establishing an unsettling mood, rather than any overt terror or gore. Like the fog that engulfs the island, this is a mystery which takes its time in allowing you to see things clearly.

It evokes M. Night Shyamanlan’s The Village in more than just the period setting; whispers in the dark, half-glimpsed spectres in the woods, characters with shifty looks who’re not exactly revealing what they know. In the same way that the filmmakers previous movie Two Down was heavily influenced by 70’s cinema, The Isle is indebted to classic horror, but to its credit, always feels like its trying to do its own thing.

One of the most frustrating aspects of modern horror is how little you care for those being picked off by whatever random CGI beastie is stalking them, so The Isle‘s slow-burn approach should at least allow for some rounded characters. This is only partially true, for while we get the brooding stoicism of Alex Hassell (Suburbicon), and the shades of grey intrigue of Tori Butler Hart, we also get the kind of Scooby Doo victims who might as well be wearing a red Star Trek shirt as they decide to “split up and search”.

Beautifully shot, making the most of its Scottish locales, and subtle and measured in execution, The Isle is a refreshing entry in a genre so often saturated by repetition.

The Isle is screening at the East End Film Festival on April 20th 2018.