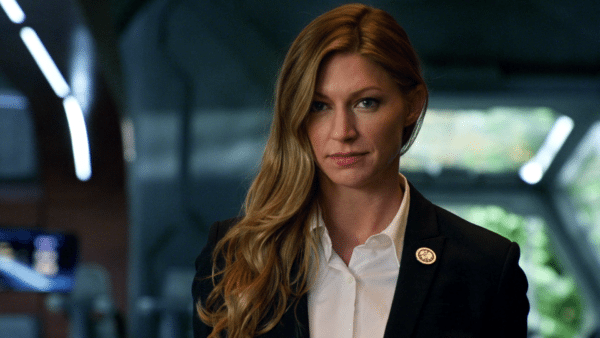 Earlier this week it was announced that The CW has renewed all five of its DC superhero shows, and now comes word that actress Jes Macallan (Ava Sharpe) has been promoted to a series regular for the fourth season of DC’s Legends of Tomorrow.

“Jes has a power to captivate in person as well as on screen,” said executive producer Phil Klemmer. “She had been guest-starring on Legends for all of two days when one of our teamsters, the guy who had been driving her to set, told me that we ought to make her a series regular. He wasn’t wrong. We knew that we wanted Sara to fall in love with someone in season 3, and our challenge was to come up with a character worthy of our fearless captain’s love — and then the second challenge was to find a performer capable of playing that part. The door had barely closed on Jes, having just finished her chemistry read with Caity Lotz, that we all turned to each other and agreed that we had found our Ava.”

“Her character arc was a bit of a slow burn this season, and yet each episode revealed a new facet of her character,” Klemmer continues. “She’s been alternately funny, poignant, engaging, endearing, and kick-ass this season — and yet I know for a fact that we haven’t hit all of Jes’s hidden gears as an actor. We are lucky to have a whole new season in which to find them. It’s not every actor who can find the emotional heart of a storyline that features John Constantine, a chicken, and a severed human foot. Thank God we found Jes Macallan.”

The season three finale of DC’s Legends of Tomorrow is set to air this coming Monday; watch a trailer for ‘The Good, the Bad, and the Cuddly’ here.