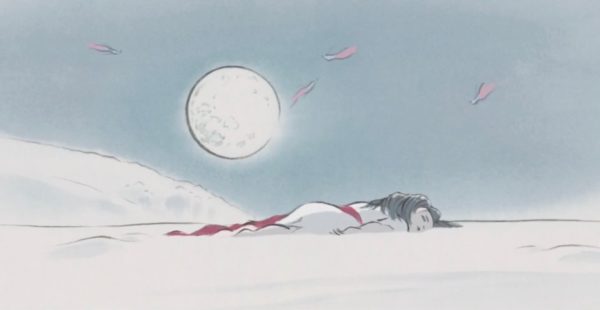 Isao Takahata was one of the most seminal voices in the history of Japanese Animation. After co-founding the world-renowned Studio Ghibli with Hao Miyazaki in 1985, his work went onto include the devastating masterpiece Grave of the Fireflies (1988), the beautifully melancholic Only Yesterday (1991), the oft overlooked Pom Poko (1994) and the divisive yet utterly unique My Neighbours the Yamadas (1999).

Each of these stories was utterly different from the last; each showcased Takahata’s keen understanding of human nature. He possessed an innate ability to connect audiences with his characters, to meld aspects of reality with fantasy, supposed fact with supposed fiction. Takahata always appeared, at least to me, to be the creator of more filmic, more pointed, more mature companions to the rest of Ghibli’s vibrant canon. A man who sought to craft experiences beyond animation.

Roger Ebert once identified a common technique in Japanese filmmaking, known as the “pillow shot”. Based on the “pillow words” (Makurakotoba) used in Japanese “waka poetry” – where short epithets would be used to break up the rhythm of a line and add a new, underlying meaning to otherwise normal phrases – Ebert explained that the filmmaking equivalent (the shot) would often be used to break scenes focusing on normal, everyday activities. He uses Ozu – the Japanese auteur behind Tokyo Story (1953) and Late Autumn (1960) – as an example of someone who often employed the “pillow shot” in his films, breaking up scenes of families eating dinner or housewives going about their daily tasks, with framed, external shots like the passing of a distant train across a sea of rooftops or a slow, drifting cloud over thick powerlines. This technique slowed down the pace of Ozu’s narratives, giving his films an ethereal and meditative quality, turning the everyday into something more. 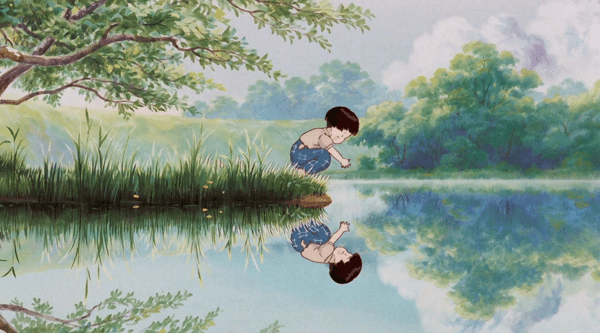 Ebert identified a similar technique in Grave of the Fireflies, Takahata’s sombre masterpiece following a young man and his younger sister escaping the horrors of firebombing in World War II era Japan. Much like Ozu, Takahata intersperses long periods of silence – and seemingly mundane activities such as the washing of clothes – with various “pillow shots”, drawing the audience into the film, into the relationship between the two siblings, by allowing the action to breathe and providing moments of contemplation before moving the narrative forward. This was a technique rarely associated with animation, where action, imagery and narrative pace were typically turned up to eleven, to make “full use” of the limitless possibilities offered up by the medium.

Takahata was never interested in this. He was a director constantly in pursuit, not simply of an external reality – stemming from his choice of recognisable settings and a focus upon the interactions of everyday life – but an emotional one, leading his characters (be they a disheartened career woman or a revolutionary band of shape shifting raccoons) towards moments of relatable enlightenment. His use of techniques such as the “pillow shot” allowed his stories to feel more than animation, to blur the lines between a shot framed in the camera or drawn out by hand.

The technique was pervasive throughout Takahata’s work, but it was his final film which came the closest – through a beautiful symbiosis of animated form and thematic subtext – to illustrating reality. That film was The Tale of Princess Kaguya (2013). 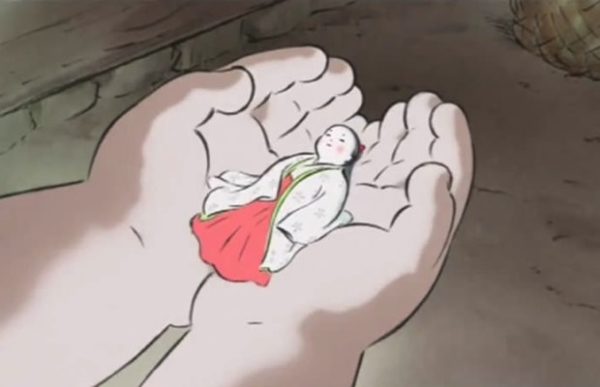 You may have heard of this film, you may have not (how about that for an observation). Either way, I compel you to go and watch it. The story is based on one of Japan’s oldest folktales “The Tale of the Bamboo Cutter” in which a lowly cutter stumbles across a glowing bamboo shoot whilst walking through the forest. Cutting it open, he finds a fully formed girl within, no bigger than his hand. Taking her back to his wife, they raise the young girl as their own, watching her growing suddenly and perceptibly before their eyes, much like a bamboo shoot. Their life is joyous and calm until one day, the cutter finds another glowing shoot, this time filled with gold. He takes it as a sign from the gods, that the young girl (now named Princess) ought to be raised in a manner befitting her station. The family uproot themselves, moving to a mansion in the city, where the Princess is clothed in fine robes, doted upon by servants and “given” the name Kaguya. Her teeth are painted black and her eyebrows plucked – all at the behest of her increasingly status obsessed father. She longs for the freedom of her childhood, finding herself increasingly penned in and controlled.

Shooting up into womanhood, Kaguya is suddenly doted upon by five wealthy suitors, all of whom compare her to an exotic treasure to win her heart. She rebuts these claims by saying the only man worthy of her hand, is the man capable of bringing back these treasures. Years pass, with Kaguya becoming more and more disillusioned with mansion life, until the five suitors inexplicably return, baring the treasures thought impossible to retain. After they are all found as frauds, Kaguya is next “claimed” by the Emperor, who, valuing her tenacity, seeks to take her as a prize. She resists him to her father’s horror; she claims that if her hand is given to the emperor she will kill herself. Then finally, in a moment of abject despair, she prays.

What happens next, I’ll leave to first time viewers.

Takahata took eight years to bring this story to the screen. After the difficult development and release of My Neighbours the Yamadas (in which Isao went completely against the typical Ghibli animation style, throwing companies entire production style into disarray) it was thought to be the end for the renowned directors career. Yohiaki Nishimura, upcoming Ghibli employee and eventual producer on Kaguya, had other ideas and proceeded to visit with Takahata every day for eighteen months, to convince him to take on the adaptation. Eventually the director relented.

Not to be subdued upon his return, Takahata decided to try something never attempted before in traditional cel animation. Typically, in this system, backgrounds are drawn out for each shot, with characters laid separately on top of them in a steady process of refinement. What Takahata pushed for was a stripping back of this system. Instead of transposing shots from a sketched storyboard – redrawing them in the process – he challenged a group of freelance artists to animate directly from renowned artist Osamu Tonabe’s storyboards, sustaining their energy and immediacy in the process. This proved incredibly challenging and time consuming (the storyboards were drawn concurrently with production, started in 2009 and were only finished just before the film’s release in 2013). However, what was eventually created, should go down as one of the greatest, most striking achievements in the history of animation.

Now, let’s take a step back and think about Takahata’s decision here. Was this not just the last hurrah of some ageing auteur? Was this not some egomaniacal move to cement his legacy and prove to the world that yes, “Takahata was bowing out with a magnum opus under one arm”? I believe not. Instead, this was a deliberate decision in service of the story and a calculated move by a director at the height of his creative powers. 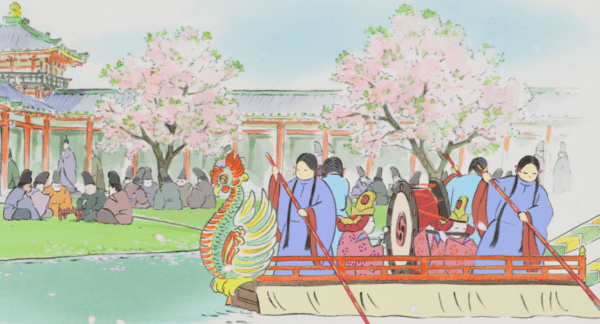 If you haven’t seen the film, think for a moment about the way I’ve described it. You may hear the story’s description and its status as one of Japan’s oldest folk talks; you may see the film stills and draw allusions to the “Ukiyo-e” style of Japanese art from the 17th century. An overall picture will build up in your mind, of a film stuck far in the past with little else to say. But watch it now (as I implore you to do) and you’ll rarely see a film which gives you the same sense of immediacy, prescience and energy as Kaguya. Shots are held before our eyes as if having been finished five minutes before, sketched characters move through watercolour backdrops as if willed to life by magic. We are catching moments in Kaguya’s life seemingly as they happen, her experiences quickly jotted down in splashes of ink, in sketched lines on her saddening face.

This stylistic choice melds incredibly into the thematic concerns of a film, which tells the story of a girl never able to live in the moment, never able to enjoy life for its own sake without being controlled and taken away from her soul’s desire. The art style is fleeting, large white spaces are constantly filling the frame. For Kaguya, these spaces are real, they are areas of the world she’s yet to perceive, outside the wishes of her parents and the requirements of her new status. The immediacy of the films style also brings to bear, the ancient folktales social relevance today. This is a story of a young girl, born free only to be subsumed by a patriarchal society, who treats her as an object and a prize to be won. We feel her sense of desperation, isolation and loss of control – indicative of her treatment at the hands of domineering men – through the erratic lines and rough brush strokes of the world she inhabits.

At the feast celebrating the conclusion of Kaguya’s naming ceremony, the Princess overhears a conversation between a group of men, aggressively cajoling her father to parade her around for the guest’s enjoyment. Takahata holds tight on her expression. This is the moment – halfway through the narrative – where the freedom of her early life has been totally destroyed. Takahata holds still further, the lines of distress coming more visibly pronounced on Kaguya’s face. Suddenly the music strikes up. She begins to run, shedding off her robes in a flash of watercolour, barrelling away towards the full moon. Here, the sketching becomes so rough, so violently drawn that Kaguya’s every step seems to draw itself. 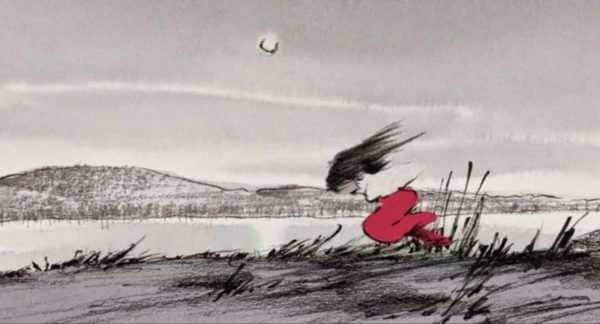 The feeling of violent, roaring anger explodes out from the frame. Takahata’s chosen style – not simply used as a gimmick to ape the folkloric nature of his source material – creates a sensation here that few animated experiences come close to: the feeling, for a few frenzied minutes, of being inside a character’s emotion. Running back to the forest, the frame suddenly stills around the Princess. Images of trees and hillsides become more recognisable until – slumping down onto her chest – she opens her eyes back at the mansion, the men’s conversation droning on. This sequence alone is worth the price of admission. It’s a testament to Takahata’s ability to push deeper than most into the emotional core of his characters; it’s a prime example of his yearning to illustrate a deeper emotional reality than typically associated with animation.

Hopefully this overview has convinced you to take a look at The Tale of Princess Kaguya and the rest of Takahata’s work. For those who’ve often struggled to explore the convoluted world of Japanese animation, his stories offer something completely different to the norm. After his passing on April 6th at the age of 82 – losing a short battle with lung cancer – there’s no better time to remember his films. Now, I’ll leave through the backdoor with one final thought.

Early on in Kaguya’s narrative, whilst briefly returning to the forest of her youth, she’s delighted to find that the seasons have wrapped around, with winter giving way to spring. She approaches a charcoal burner working in isolation, hoping to find answers. He turns and tells her its simply the natural way of things, that nothing can always be the same. She finds solace in this, in the knowledge that her current unhappiness could change, just as the seasons do. Turning away, the charcoal burner leaves her with one final thought: “everything comes back eventually”.

I’d wager the same, except perhaps another Isao Takahata.