In the 1970s, a female stand up with the stage name of Funny Cow struggles to make a name for herself on the club circuit, where women on stage are expected to be either singers or strippers. She’s discouraged by a veteran comedian and her husband is determined she should stay at home, but she won’t allow anything to stand in her way.  In her own words, she doesn’t have a backbone.  She has a funny bone. 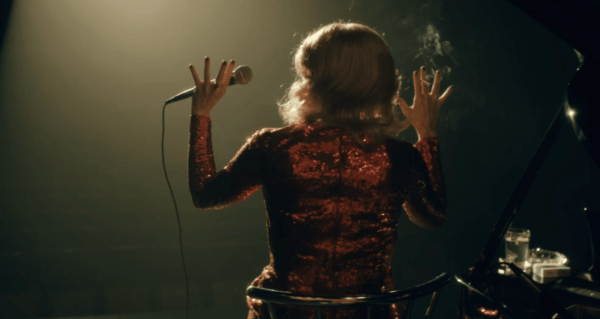 Director Adrian Shergold doesn’t make many films for the cinema.  His usual stomping ground is television and his last feature film was thirteen years ago.  That was the grim Pierrepoint: The Last Hangman, with a great central performance from Timothy Spall.  In Funny Cow, he gives us another dour story, with a typically blistering piece of acting from its star, Maxine Peake.

It’s the 1970s and the Funny Cow of the title – we never find out her actual name – is determined to be a stand-up comedian.  When she eventually gets on stage in front of an audience, she’s a natural, but this is also the working men’s club circuit in Yorkshire, so she has to resort to the type of language and material associated with the likes of Bernard Manning.   Getting this far has been hard.  Her home life has never been good: her father dies, her mother turns to the bottle, she marries her violent boyfriend, Bob (Tony Pitts, who also wrote the screenplay) who tries to prevent her following her career, and then takes up with an adoring lover, the bookish Angus (Paddy Considine).  It’s no wonder she invests all her energies in her ambitions, despite discouragement from fading funny man Lenny (Alun Armstrong). This is something of a period piece, full of the attitudes and conventions of the day, which today’s audience may find hard to stomach.  Funny Cow’s act is full of homophobic and racist comments: it’s no different to anybody else’s and it was accepted as the norm at the time, but today veers somewhere between the distasteful and downright offensive.  As a film, it feels like a kitchen sink drama or Play For Today has been re-created for a 2018 audience, showing working class life 40 years ago and the sharp division between those with education and those without, as exemplified by Funny Cow and her relationship with bookshop owner Angus.  Most of the men are drunken bullies, while most of the women simply accept their lot.  Although, when a chance to get their own back comes along, they grab it with both hands.  For Funny Cow, it’s putting down a heckler at the club.  And, for the heckler’s wife, it’s the chance to laugh her head off at her foul-mouthed partner being cut down to size in public.  You can only wonder what happened when the couple got home.

They exist in a dreary part of the world.  Just about every public place – the club especially – exists in a fug of cigarette smoke: the only colour comes from when Funny Cow has made some money and drives a bright red sports car, with clothes and nail polish to match.  Otherwise, everybody lives in a dingy world in need of some light relief, let alone laughter.  But this isn’t a film about making people laugh or how comedians just want people to love them.  We never see Funny Cow with an adoring public and, even when she achieves some modicum of success, she’s still as cynical and disillusioned as she was at the start.  It does, however, teeter into the more familiar territory of comedians being deeply unhappy off-stage, as shown by her own home life and Lenny’s tragic realisation that his career is over.

Peake is her usual razor-sharp self, nearly dead behind the eyes in an Archie Rice way (she says she’s incapable of love) in a performance full of fire and anger.  As Lenny, Alun Armstrong is superb, wearing a grotesque toupee full of pathos.  And Lindsay Coulson impresses in the much smaller role of Funny Cow’s alcoholic mother, rapidly going downhill and with little else to live for.

The irony is that, although this has been made for the cinema, it would be more comfortable in a smaller setting, either on Shergold’s usual territory of the small screen or even in a studio theatre, where the echoes of Trevor Griffiths would resonate.  The emotional pull loses impact on a bigger screen and, with some of the actors playing multiple roles, it starts to look very stylised and mannered.  Ultimately, Funny Cow has no moral, no conclusion as such – other than the sense of the film being more funny peculiar than funny ha ha.