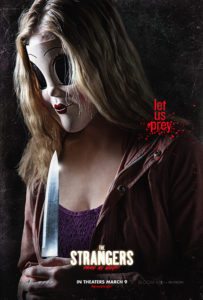 A family staying at a secluded trailer park during the off-season are pursued and attacked by a gang of masked intruders boasting an array of weapons and mysterious motives. 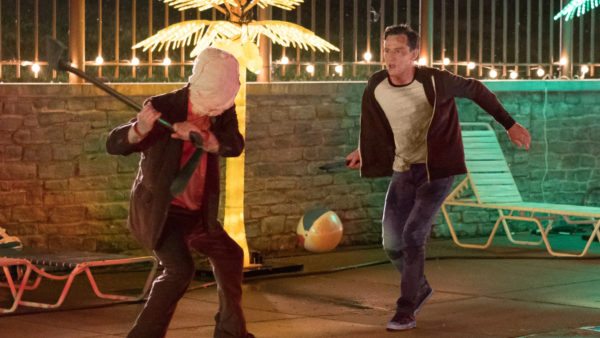 More than perhaps any other genre in Hollywood, horror movies have a tendency to eat themselves. The genre is packed with the originality of films like Get Out and It Follows, but it also trades heavily in sequels, remakes and reboots. It’s in that arena that we get The Strangers: Prey at Night, which manages to be a sequel, a remake and a reboot of the 2008 original movie all at once.

Original writer-director Bryan Bertino is back, but only on scripting duties alongside Ben Ketai, who made the surprisingly good claustrophobic horror Beneath a few years ago. In the director’s chair is Johannes Roberts, who was last seen at the helm of the impressive shark attack movie 47 Metres Down. The plot is as simple as they come, focusing on a perfect nuclear family – husband, wife, son, daughter – who are spending some time at a secluded trailer park for reasons that are justified just about enough for the audience to buy their presence.

They are soon confronted by the same three masked murderers as in the first movie – referred to as Dollface, Pin-up Girl and Man in the Mask – who turn up with an array of blades and axes, thirsting for blood. Roberts is surprisingly patient in the first half of the movie, spending plenty of time with parents Christina Hendricks and Martin Henderson, sketching out their relationship with son Luke (Lewis Pullman) and troubled daughter Kinsey (Bailee Madison). Unfortunately, the family dynamic isn’t all that interesting and it’s tough not to just be waiting for the violence to start.

When the violence comes, it’s sporadically entertaining and has the appeal of 1980s camp, homaging John Carpenter in a similar but less successful way to Adam Wingard’s double hit of You’re Next and The Guest. Roberts has a good eye for a neon light and a troubling use of an iconic 80s power ballad, but these moments of trashy delight are peppered among lengthy, tedious chase sequences. Often, the killers simply stand still until the camera pans to them and the fact that this is a trope doesn’t excuse how often it happens here.

Prey at Night often gets a little bogged down in its own desire to nod to classic horror. The Man in the Mask is as unkillable as Halloween‘s Michael Myers and, with a sack on his head, he bears more than a passing resemblance to Jason Voorhees in Friday the 13th Part II. One final scene is almost a shot-for-shot retread of the final moments of The Texas Chainsaw Massacre and, although a cine-literate reverence for the history of the genre is laudable, these homages are so overt as to distract from the tension and the scares.

This is a film that trusts its sense of light-hearted style to paper over the generic feel of its plot and execution. Unfortunately, there’s not enough of that style to cover a movie that doesn’t have an original thought in its entire genetic makeup. Filmmakers like James Wan and Adam Wingard are so well-versed in executing genre tropes that they can make something conventional feel fresh. As strong as Roberts’s work on 47 Metres Down was, The Strangers: Prey at Night makes it clear that he’s not quite on their level yet.