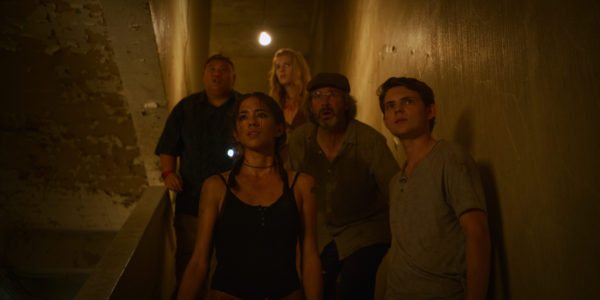 How was it directing yourself?

Owen Egerton: I found I was the easiest actor to direct because I never questioned myself and was always compliant [laughs]. It was really fun, I had a blast. I loved more to watch these guys to their magic.

How did you first get the idea for Blood Fest?

OE: I have worked with the Alamo Drafthouse here in Texas, and they love film. They like do to these experiences with film screenings like they do a screening of Jaws in a lakeand hire scuba divers to scare people, thinks like that. I started thinking about a horror festival that would do something like this, but more morbid. What if your life depended on doing what they do in the movies? You know, kind of Ready Player One with all these characters and set pieces from horror films, where trivia was the key to survive. Then it just went from there.

Where you guys fans of horror from before?

Jacob Batalon: I actually hate scary movies. But it was certainly fun to be in one, I sort of got to reach a personal milestone as an actor. Now I know what makes films scary so I makes them less scary in a way.

How was working with all the props and the makeup and the blood?

Seychelle Gabriel: It was interesting. The continuity definitely was a challenge because you shoot part of a scene one day and the next part could be a week later. There was a scene where I chainsaw-ed a cheerleader’s head off and there was blood all over my face and it was impressive to see the makeup department figure out how to make it work throughout the shooting. 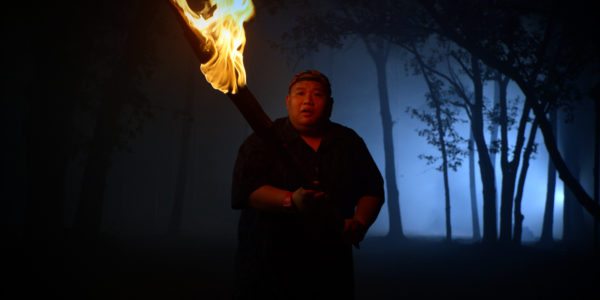 The set of the festival site was really impressive. Was that built, or did you find a established location?

OE: We didn’t have the budget to build the entire festival area, so one of the real fun challenges was how do we make a place feel like several different areas while all being in the same place, sort of speak. A lot of cool work went into it, and the art department did a great job making that a reality. We moved all over within a forty or fifty-mile radius. We shot in abandoned buildings on the west side of Austin, and festival grounds on the east side and all these different things while having them feel like they belong in the same festival.

How was your thinking process like when it came to choosing the different themes for the festival areas?

OE: I started way back with my son, sort of drawing pictures of different things we wanted to see, drawing inspiration from different film genres. You see hints of the places when Seychelle looks at a map or Jacob looks at a sign, and what movies represent the genres that I like and that could be represented in the festival.

SG: I like that it’s sort of like the circle of trees in A Nightmare before Christmas. Where you only get to see one part, but the signs and hints get your imagination going and you keep thinking what’s beyond.

What were the biggest challenges in acting in a horror movie?

SG: Stamina. You have so many scenes were you are hyperventilating and you have to be in that state before a take and maintaining that throughout the day in the summer in Austin, and sometimes indoors in a non-ventilated building.

JB: The heat was part of it, but for me it was definitely the trying to act believably scared. Because you hold on to these emotions the whole day and you get tired of being in that state, but it was fun and rewarding when you manage to make it work. 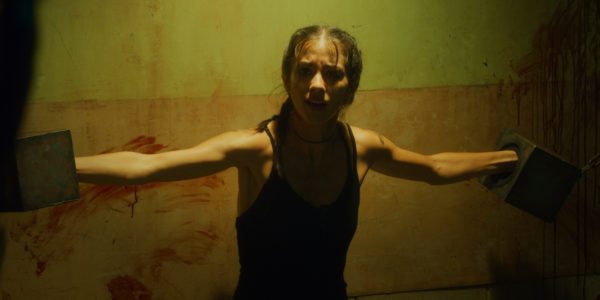 What was your favourite set piece from the movie?

SG: I think I liked the doll theatre best. The dolls were creepy and there were so many different types that just made me go “where do these come from?”
OE: They were just there. We just found them like that. I heard they disappeared when we finished the movie [laughs].
JB: I hate clowns, but I liked the circus-piece with the clowns attacking. It was a horrifying but kind of cathartic experience.

A big part of the film deals with the debate on horror movies and the sanitation of violence, what do you want the audience to take away from the film?

OE: I am a big believer in that we as human beings have been telling scary stories to one another for ever. Because that’s how we deal with the fact that we are mortals and we are going to die. I remember as a kid, watching horror movies and watching Michael Meyers or Jason and thinking that no matter how fast you run, he’s going to get in front of you and kill you. I liked that we could play and laugh with our own mortality and make us come to terms with that.