Battle for Azeroth, the seventh expansion for Blizzard Entertainment’s MMORPG, World of Warcraft will arriv on 14th August and with it will come battles galore as heroes for the Alliance and the Horde fight it out for possession of a powerful new resource called Azerite.  The expansion is available to pre-order now and is also available as a retail exclusive Collector’s Edition that includes lots of extra treats. 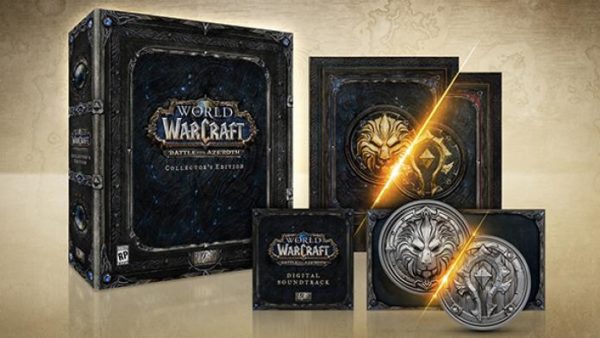 The new expansion will bring two new kingdoms to explore; as one of the Horde’s champions players will be able to travel to the empire of Zandalar and use the troll’s naval might, as one of the heroes of the Alliance players can journey to the seafaring kingdom of Kul Tiras and enlist its inhabitants.  With these two naval powers enlisted players will be able to set out on island expeditions in groups of three and battle against enemies and other players.

Several new playable Allied Races will also make an appearance including the Highmountain Tauren, Void Elves and Dark Iron Dwarves.  Each new race will come with their own unique racial abilities that will add strength to the faction.

Other features of the new Battle for Azeroth include the new Azerite resource recently discovered in the Burning Legion’s wake, epic 20 person co-op battles and a raised level cap.

Apart from a code for the expansion, the Battle for Azeroth Collector’s Edition will include two new World of Warcraft novellas on the Burning of Teldrassil, one written from the Alliance perspective and one from that of the Horde. There will also be a digital key for the Battle for Azeroth soundtrack and lots of in-game content within World of Warcraft and other Blizzard games.

Finally, The Collector’s Edition will come with a huge double sided Mark of Allegiance that will allow players to display and features both factions.  See the video below showing this decorative display piece.

Battle for Azeroth will be available this August.