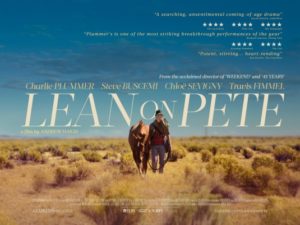 Fifteen year old Charley (Charlie Plummer) has never lived in one place for long.  He and his dad now have a squalid house in Portland and the teenager discovers a local racetrack nearby.  He gets a job working for racehorse owner Del (Steve Buscemi) and becomes attached to one of the horses, Lean On Pete, but as the animal has lost one too many races, he’s about to be sent away.  Charlie decides to save him from the inevitable and the two go on the run. 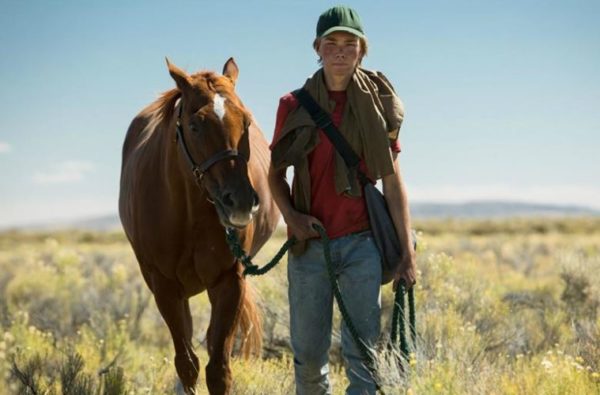 Just a couple of years after the critical success of 45 Years, director Andrew Haigh returns with another emotional story, but this time set in the vast expanses of north west America. Gone are the small, intimate settings of his previous film: they’re replaced by dusty racetracks and never-ending desert, in Lean On Pete, a film which appears to be a coming of age story.  Underneath it’s closer to the picaresque tradition and reflects a need to have a family and generally belong.

At the centre is 15 year old Charley (Plummer), who lives with his father, a charmer with an eye for the ladies.  Past dalliances have resulted in an almost nomadic lifestyle and now they’re in a cockroach infested property in Portland.  Charley needs some cash, so takes a job working for Del (Buscemi), whose horses race at the local track but one of them, Lean On Pete, isn’t getting the right results.  For Del, the horse is a write-off but for the teenager, who’s formed a bond with the animal, he’s a friend and he has to save him. 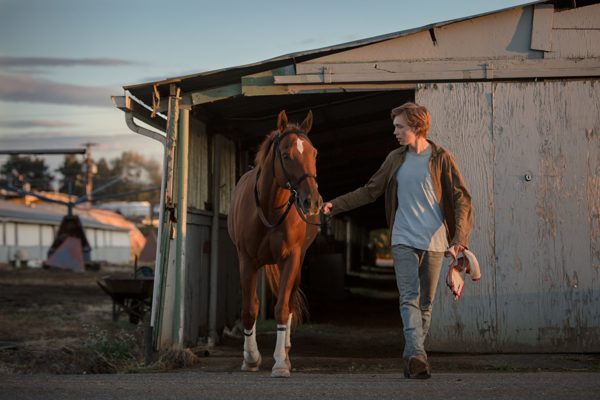 For the boy, this isn’t just a physical journey but an emotional one as well and, with the exception of the horse, one he has to cope with all by himself.  Adults always let him down: they’re either just not up to the job or they don’t want to know.  That wandering eye of his father’s (Travis Fimmel) leads to a violent encounter with an angry husband, and the result is hospital.  There’s a glimmer of hope in the shape of Del – he gives Charley a job, puts him straight about his table manners – but he’s not father material.  All along the way, Charley is forced to stand on his own two feet, regardless of his tender years.  And the road just gets harder and harder.

A film of two halves, Lean On Pete spends its first section concentrating on Charley and the horse of the title, the only consistent feature in his life.  They trek through the desert which, while as unwelcoming as most of Charley’s world, still has a beauty all of its own when seen through Haigh’s eyes.  But a word of warning: there is a scene in his half which, even though you can see it coming, is shocking and upsetting.  Part two is all about Charley trying to track down the one remaining member of his family, his aunt Margy (Alison Elliott).  By this stage, he is homeless, leading a hand to mouth existence and has lost everything.  A quickfire cluster of stories are crammed into this section, making it something of an endurance test and it’s hard to believe that his story is going to have anything approaching a happy ending. 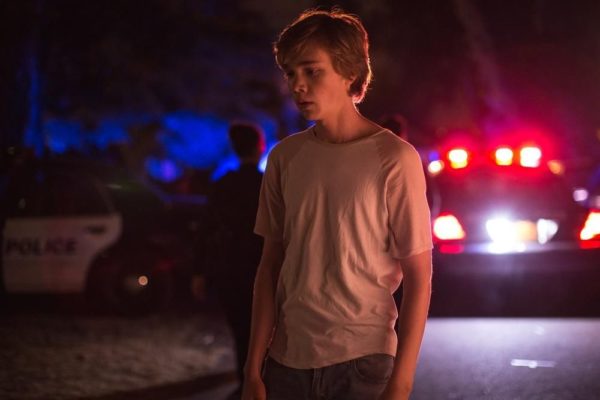 The people Charley meets along the way – the homeless, the jockey, the war veterans – make the film feel like a contemporary odyssey.  Yet again, Haigh demonstrates his ability to get the best out of his cast, particularly Plummer, who is impressive as the beating heart of the film.  Steve Buscemi, who makes a wonderfully foul-mouthed entrance on-screen, is also at his best as the hard-bitten horse owner.  But the film drags in its later stages, heaping more and more misery on the teenager’s shoulders.  It’s a great showcase for the cast but, as a whole, loses its way and ends up being a mournful plod through the desert.