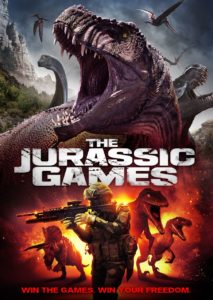 In an alternate future, the proliferation of reality TV has finally reached its logical conclusion; total global domination! It’s at that point where even our legal proceedings- and more worryingly, the practice of capital punishment itself- have been bastardised into a sick form of televised entertainment, complete with vomitous merchandising and vulgar corporate sponsors.

With tasteless spectacle having usurped fair trial and due-process, the emphasis is no longer upon determining the guilt or innocence of the accused. Instead, it is all about sentencing them to the goriest and most sensational ends imaginable. Enter ‘’The Jurassic Games’’: an annual tournament that has convicts fight to the death, in an attempt to secure their freedom. All they have to do is emerge as the last one standing and they get to go home.

Only there’s a twist! Whilst this might appear to be a straightforward free-for-all, teamwork is still advised, as the contestants have more to worry about than just each other. Indeed, there are bigger, badder, toothier things to contend with in the arena. Things like: oversized prehistoric insects; deadly sabre-toothed cats and (as the title suggests) ferocious dinosaurs. 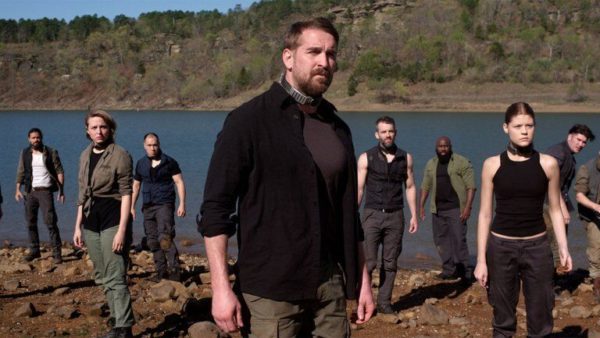 As far as pitches go, The Running Man meets Jurassic Park ‘aint half bad. There’s scope there for witty satire of the media, exhilarating ultra violence and good old fashioned creature-feature thrills. Throw in a dash of Ready Player One- with a VR setting and some multistage challenges- and you’ve got the makings of a terrific B-movie on your hands!

Alas, director Ryan Bellgardt has always been good at coming up with these enticing hooks. Where he’s been less successful, is in actually executing them. Be it because of obvious financial limitations, graceless screenwriting, or just plain-bad acting, his good intentions invariably fall apart whenever they transition to the screen. See Gremlin or Army of Frankensteins for further reference.

It’s therefore relieving (and more-than-a-little surprising), to report that The Jurassic Games is a marked improvement upon Bellgardt’s previous offerings. That’s not to say that it’s great, but it is say  his best yet by quite some margin.

This is partly down to relentless pacing, which ensures that- even when it blunders into SyFy channel territory-the film always remains stimulating and lively. If that sounds a tad patronising, or like a backhanded compliment, then it’s honestly not meant to. On the contrary, it’s all-too-rare that these low-fi movies can sustain their momentum like this, as they often end up floundering due to an  imagination deficiency.

The Jurassic Games on the other hand, is constantly escalating its  stakes with new threats and fresh ideas. In fact, it’s impressive just how much Bellgardt and his team have managed to pull off here. The production value might not be up to blockbuster standard, but there’s enough ingenuity behind the camera to make up for that, along with a generous helping of inventive set-pieces. One particular highlight is a surprisingly intense velociraptor pursuit, that takes the audience through a futuristic maze complex. It’s a scene that wears its influences on its sleeve, obviously aspiring to mimic a certain kitchen scene from a certain Spielberg movie, but to it’s credit, it does a decent job, with clever staging, bloody violence and impactful visuals.

The same goes for the other action sequences, which are all creative, gimmicky fun. If nothing else, they demonstrate that Bellgardt is honing his skills with each subsequent release, which is commendable . On that note, the filmmaker has thankfully developed a firmer grasp on things like tone. Whereas his other efforts would awkwardly lurch between high-drama and utter schlock, The Jurassic Games places itself decidedly in the latter camp, and it’s all the better for it. This is a film that knows exactly who its audience is and exactly what it wants to do. Again, that might sound like damning with faint praise, but it’s genuinely not. 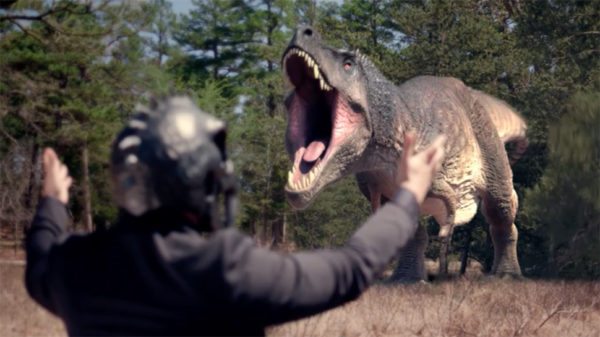 The unlikely improvements don’t stop there. The special effects have received a huge upgrade since Gremlin and wouldn’t look out of place in a mid-budget TV show. Sure, the textures on the dinosaurs can  feel a little rough at times, but the important thing is that they always interact with each other and the environment in a believable way.

As for the writing, well that’s more of a mixed bag. There are definitely a few clunky lines of dialogue and several leaps in logic as the film gallops past plot points and exposition at an almost comical rate. Nevertheless, the screenplay is still concise, tightly-structured and has reasonably well-defined rules.

Speaking of which, there are some cool details here to the virtual game. For instance, if an intimate expires in the simulation, then their physical body is automatically given a lethal injection. Meanwhile there’s a ‘’ticking clock’’ aspect to proceedings, courtesy of a  PUGB-esque contrivance, wherein the battle arena is continually shrinking, so that characters are always being steered towards new dangers. It’s an efficient way to introduce jeopardy to the story and keeps things moving at a decent clip.

Lastly, we come to the acting; which is something of a sticking point for Bellgardt movies. If you look at his previous work, it sometimes seems like the director is unwilling to tailor his material to suit the abilities of his amateur cast. Or to put it more bluntly, he often insists on giving his actors difficult roles and highly emotional scenes, despite the fact that they aren’t really up to the task.

Luckily, this is another area in which Bellgardt has come leaps and bounds, although it still remains his biggest shortcoming. Let’s put it this way: the ratio of good-to-terrible performances is now at a more palatable 50:50, as opposed to like… 20:80. Granted, this means that some of them are still astoundingly awful, like Kyle Pennington (who goes full-Yosemite Sam to portray a violent, grumbling yokal with a hair-trigger temper) or Luke Wyckoff, whose extravagant depiction of a gurning cannibal reaches Battlefield Earth levels of over-the-top.

But everyone else puts in a good turn, especially Katie Burgess, who was likewise a standout in Gremlin. Here, she has more to work with though and gets to sink her teeth into an intriguing and truly enigmatic character  As the inscrutable Joy, she is initially unassuming and aloof, but as the plot starts to unravel, she gets to play with things like duality and empathy and  ends up stealing the show as a result.

To be honest, this review has been needlessly flattering of The Jurassic Games. It’s far from great. In fact, it’s barely even good. But when you’ve seen too much straight-to-VOD crap, then you really start to  appreciate those films that have effort put into them. And that’s certainty the case with this one. Not only that, but it’s encouraging to see that Ryan Bellgardt is making improvements as a filmmaker, because he has some really good ideas. And based on this evidence, he can even pull them off when he sets his mind to it.