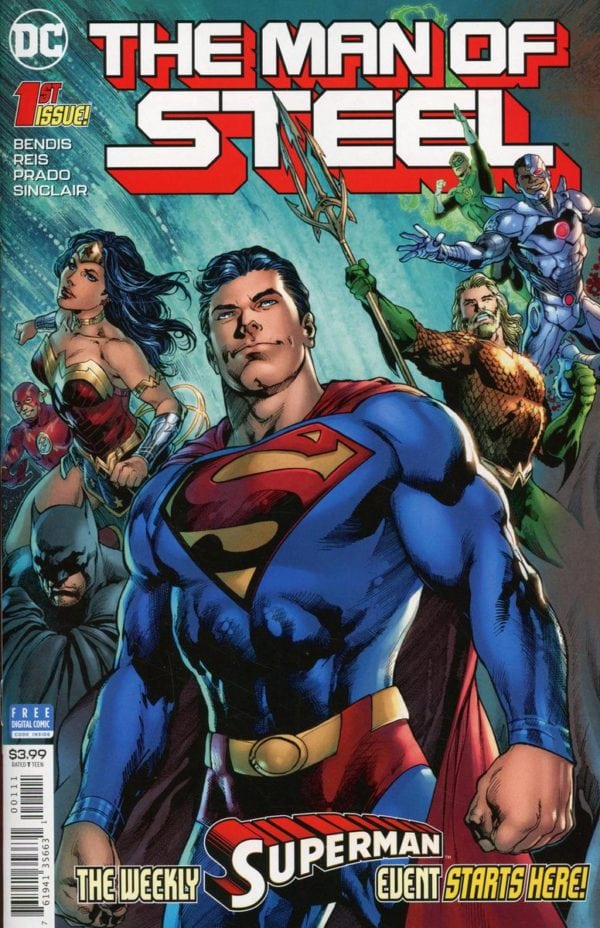 Comics legend Brian Michael Bendis’ stewardship of DC’s biggest superhero begins now with The Man of Steel #1, the first is a five-issue weekly miniseries. Though Bendis technically began his Superman story in the final pages of Action Comics #1000, Man of Steel #1 is the proper introduction to Bendis’ tale and gives readers a better idea to what he is bringing to the table. If this issue is any indication, Superman is in good hands.

Unlike the bombastic preview in Action, this is a relatively quiet introductory issue to Bendis’ run. His handling of Superman is nice, examining some of his core characteristics through several small events. From capturing a pair of Batman rogues in Metropolis to investigating a possible arson case, Superman’s interactions with people are both humourous and  insightful. Bendis already shows a good understanding of the type of hero Superman is through this issue as well as a good handle Clark Kent and his relationship with his family, though we only see Clark, Lois and Jon very briefly.

One of Bendis’ most well-known attributes is his wordy exposition and the amount of humour he injects in a story. While Man of Steel does have plenty of dialogue, none of it feels too much on the page or is clunky exposition. Bendis cuts through to the heart of Superman’s perspective and his views of Metropolis. The humour also isn’t too over the top, but fits with Superman’s nature as well as those who meet him for the first time by forgetting he has super-hearing. Everything feels pretty organic to the story.

The new villain Rogal Zaar also gets a boost from his rather one-dimensional portrayal in the short preview story. Though we only learn a bit more about him, Zaar is presented as someone who seemingly has legitimate concerns over Krypton’s power and is afraid of their expanding influence in the galaxy. The cast of characters around Zaar is also interesting because it shows he has a decent amount of respect from some of the universe’s biggest faces. Whether or not his claim is true that he was somehow involved in Krypton’s destruction, this insight into his personality and concerns give him a bit more depth and the potential to be an interesting addition to Superman’s rogues.

Ivan Reis is on art duties for the issue minus the final two pages. Reis makes every image of Supes stand out whether he’s flying through the air or using one of his other various powers. His Superman is full of charm through his facial expressions as well and does a good job displaying the reaction from people who see him for the first time. Reis also succeeds in the body language and movements of the characters. They’re don’t look or feel stagnant, but have clear movements both in the panels and between them. Alex Sinclair’s colours and Joe Prado’s inks compliment Reis’ work with a good use of vibrant colours. Jason Fabok takes over the art for the final two pages and his work is consistent in look and feel with Reis’, but it’s also a bit strange that Fabok did the final two pages at all.

Bendis makes a great formal entrance into DC with The Man of Steel #1. It’s a shame we don’t see a bit more of Superman’s supporting characters in this issue and the ending is a little abrupt, but Bendis’ focus on Superman and this mysterious new villain shows he has a good handle on the title hero. Reis’ art showcases Superman in all his glory with some nice colour work from Sinclair. From this first issue, The Man of Steel looks to be a fun and worthwhile weekly series for Superman.