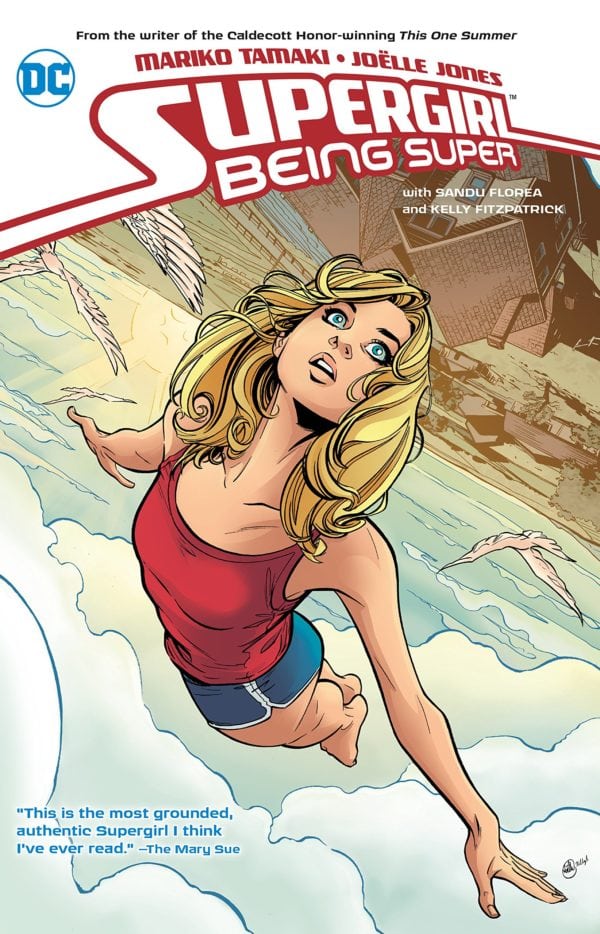 Supergirl’s popularity has been on the rise in recent years thanks to the hit series that originated on CBS and is now home at The CW. Thanks to that rise, DC has put out a new origin for Supergirl in a standalone tale from writer Mariko Tamaki and artist Joelle Jones that grounds Kara Danvers and focuses on the changes she goes through as she discovers more about her powers and heritage. It’s a character-driven story that gets to the heart of who Kara is.

The book is a very Smallville-like take on Kara’s younger days as she deals with typical stuff teenagers go through, like hanging out with friends or training for college tryouts, while balancing the changes she goes through. It skews from the typical Supergirl origin to make a bit more of a parallel with her famous cousin. Like Clark Kent, Kara was sent to Earth when she was very young and barely remembers Krypton. This opens the door for Tamaki to play around with Kara more as she relates to her friends and family as well as the struggles in growing up as an alien.

Tamaki’s take on Kara is well written and compelling. The changes she makes to Kara’s backstory are interesting and bring something new to the character. Kara’s a likeable and relatable heroine as she deals with her powers and the sudden problem of them mysteriously shutting off at random and critical moments. She becomes even more endearing after a personal tragedy at her school, going through the stages of grief as she copes with her loss and what she could have done. Tamaki succeeds in making Kara a very youthful and energetic person and focusing on this being more of a coming-of-age story rather than a superhero origin.

The supporting characters are nice additions as well. Kara’s adoptive parents aren’t just mirror images of the Kents, but are still supportive of her. Her father is interesting, though, as he’s somewhat withdrawn and uncomfortable talking to Kara about her powers (along with other aspects of life, such as birthdays or the government) while her mother is far more open to talking about her troubles. Her best friends, Dolly and Jen, are a nice mix of quirky and straight-forward characters that have good chemistry with Kara. Each of the supporting players brings out something new in Kara and adds to both the story and her journey. Part of this is helped by the fact other characters from the mythos, such as Superman or Lex Luthor, are hardly even mentioned, keeping the focus directly on Kara.

Catwoman‘s Joëlle Jones illustrates some pretty gorgeous artwork throughout the story. Her character work on Kara is great from start to finish, whether she’s just lying in bed, flying or chatting with a friend. There’s a nice amount of detail to her and the other characters, particularly her father’s stiff physical behaviour when he’s uncomfortable. The facial work on all the character captures the various emotions they go through when tragedy strikes and its immediate aftermath. The movements are quite animated with some of the few action scenes well choreographed. Jones’ artwork is complimented by Kelly Fitzpatrick’s vibrant colours, making all the images standout with a nice variety. Whether its a shot of destruction or a close-up of food, the colours Fitzpatrick uses are quite distinct.

Fans of Supergirl should enjoy the focus Supergirl: Being Super gives Kara. Tamaki dives into Kara’s personality and what drives her while giving her a refreshing origin, but one that focuses more on her as a teenager coming into adulthood than declaring she’ll use her powers to become a superhero. Jones’ artwork is nicely detailed with a lot of emotion coming off the various characters while Fitzpatrick gives some vibrant and popping colours throughout the book. It is a very good jumping on point for fans of the TV series or anyone new to comics.