Behaviour Interactive have released the Curtain Call DLC pack for their award winning horror survival game Dead by Daylight on Xbox One and Playstation 4 in Europe and North America.  This latest DLC pack brings a new killer, a survivor and a new map as well as an exclusive item for the new survivor.  You can meet the new killer in the trailer below… 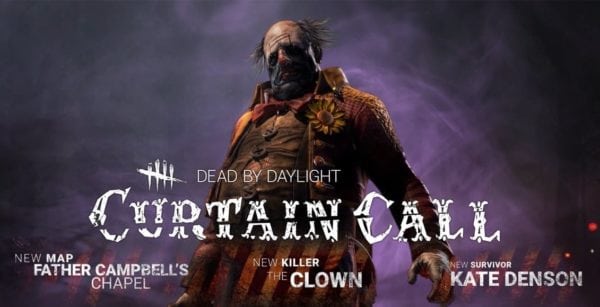 Curtain Call brings the brightly painted caravan of the Killer Clown to the game.  His sinister greasepaint smile hides a malevolence that would see him casually chop off your fingers for his own gruesome trophy.  The Clown’s killer power is The Afterpiece Tonic which he will throw at survivors causing them to have impaired vision, reduced movement speed and involuntary coughing.  He also has several perks that will make him very unpopular with survivors.

Joining our roster of survivors is former singer Kate Denson who has the following perks – Dance With Me will allow her to fast vault without leaving scratch marks for 3 seconds, Windows Of Opportunity will unlock her aura reading ability revealing vaults when within a range of 20 metres, and Boil Over which increases her struggling effects.

The new map to survive in is Father Campbell’s Chapel located within the grounds of the Crotus Prenn Asylum joined by the Clown’s own caravan and shadowy steed.

Curtain Call is available now for Xbox One and PS4.