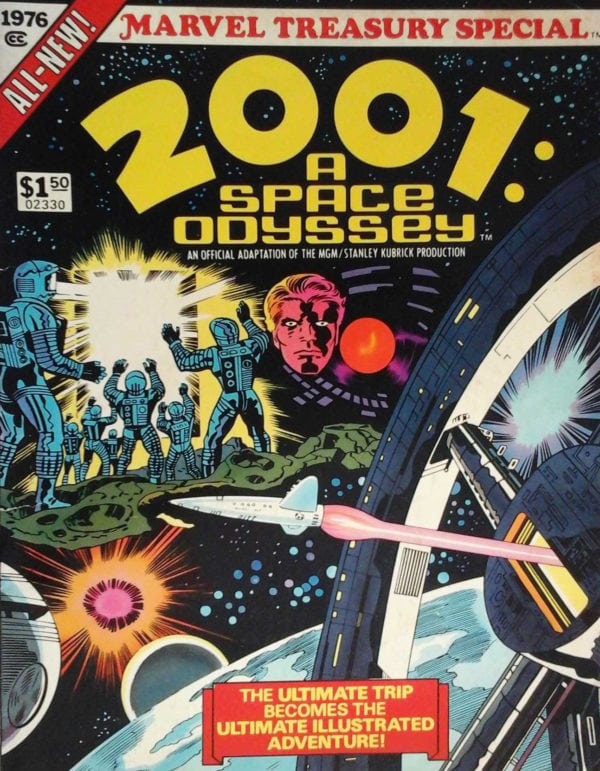 The oversize treasury edition (a large tabloid-sized format that Marvel was fond of in the mid-70s) kicks off Kirby’s run with a full-length adaptation of the film that boasts the tagline, “The ultimate trip becomes the ultimate illustrated adventures!” Does it? Well, no. A science fiction masterpiece becomes a mid-70s Kirby sci-fi comic. Is that statement reductive? That all depends on how you feel about mid-70s Jack Kirby comics. The key factor here is that, while the plot and even the visuals of the film are faithfully adapted (to the point where several panels are photo stills from the movie, similar to the collage work that Jack had been doing in his comics for years), Kirby plots his own course to take us through the journey. He moves through the beats of Kubrick’s film and chooses to borrow from Clarke’s novel when it suits him.

The comic book medium could have never conveyed the sense-shattering aural emanations of the Monolith, so Kirby does his best to visually represent this, showing the originally flat, black obelisk to be bursting with energy and his signature Kirby-crackle. The film is otherwise hushed, and though Kirby always puts the art in the forefront of his books, he wasn’t quite ready to pioneer the near-silent arthouse comic. There’s dialogue where it wasn’t in the film or the book, and we even get a few thought balloons to help us understand what exactly is happening in certain key scenes. Does this cause you to miss the same weighty impact of the film’s most somber moments? Yes. But critics miss the point. You were going to miss that impact in this book anyway. It’s not the movie. It was never going to be the movie. If you want the movie, go watch the movie. If you want to see the material put through the prism of arguably the most innovative artist the medium has ever seen, pick up this treasury edition. The oversize pages are nearly the size of his original drawings, and provide a beautiful format on which to see these illustrations. The film is in IMAX right now, but this treasury edition is the closest you can come to IMAX in the comic book medium. 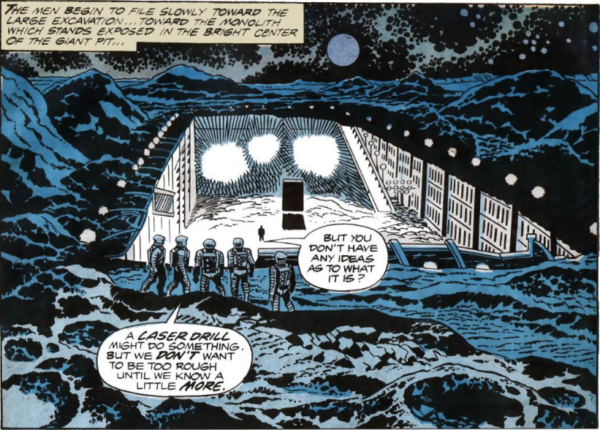 Undeniably more important than this treasury edition were the ten regular-sized monthly issues to follow. Arguably missing the point of the film, or very carefully disregarding it, Jack recreates the progression of the monoliths’ influence throughout the first six issues. We start in the prehistoric past. Inevitably, a monolith shows up to guide one wayward human to the next step in human evolution and technological advancement. In the back half of the story (at first in the same issue, but later split across two), we meet a descendant of said prehistoric figure, and they are inevitably drawn to a monolith in space. There they meet the same fate as Dave Bowman, living an entire lifetime in the course of minutes before being reborn as the “New Seed”.

Issues #5-6 deal with Harvey Norton, a man who lives out his superhero fantasies in a futuristic amusement park known as “Comicsville” in the year 2040. I can’t quite explain this one. While living his fantasies in a get-up that can only be described as Incan Captain America, he has a chance run in with a monolith “like the one they found on the moon in 2001 A.D.!” This sets him on a course to get his life straight and become an astronaut. In so doing, he becomes a real life hero, sacrificing himself to save a space princess. As he lay dying, he’s visited once again by a monolith, which grants him an accelerated lifetime as a superhero, before he withers and dies, reborn as a star child.

Issue #7 sees the adventure of a newly minted star baby across the cosmos. This issue purportedly seeks to answer the question of whether or not these new creations are saviors or destroyers. Coming across a war-torn planet on the brink of death, he finds a pair of lovers amidst the the chaos and destruction. When they meet their end at the hands of robbers, the “New Seed” takes the essence of the lovers and uses it as the foundation for new life on a planet stewing with primordial ooze. These metaphysical ideas, while maybe missing the mark of the original source material, make for wild comics, with a cavalcade of beautiful cosmic imagery as only Jack Kirby could produce. 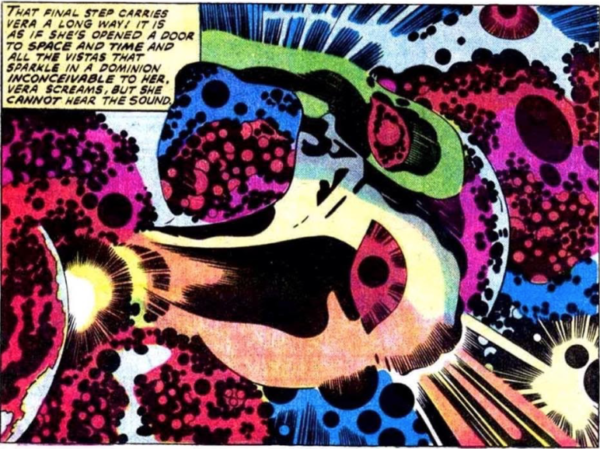 Issue #8 launches us on a new tale. We’re introduced to “Mister Machine,” who is very soon to be known as Machine Man once he gets his own comic to continue the stories begun here. Mister Machine is a thinking robot. The 51st of his kind, he’s given the designation of X-51. All of his kind eventually reach a level of self-awareness that drives them each mad. X-51 is different, as he is raised by a scientist named Abel Stack, who treats him as though he is human, even fashioning for him artificial skin and hair. When the order comes down to initiate the destruction sequence for these “defective” models, Abel Stack removes the bomb from X-51 and commands him to take off. Stack has no way of getting clear of the blast and is consumed by the explosion. X-51 assumes the name of Aaron Stack, but his ability to defy gravity does not help him blend in. Pursued and captured by the security force from the project that created him, he is stripped of his human trappings. Treated as a functional machine with no identity, Machine Man begins to go mad, as his brothers had previously. In the throws of insanity, he is visited by a monolith, restoring his mind and evidently doing for robots what it had once done for man at his dawning. 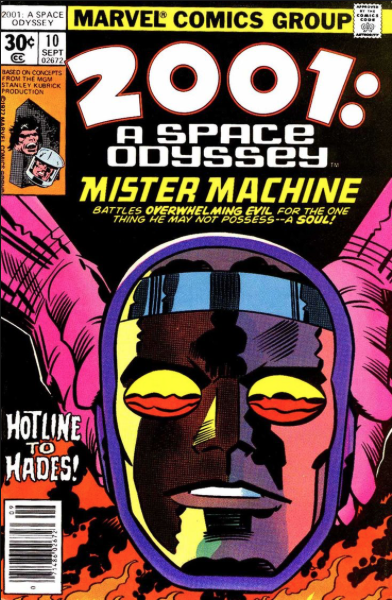 From here, 2001 is the story of Mister Machine, as he attempts to find a place in society and evade capture and destruction. This continues after the cancellation of the book, and Machine Man begins publication shortly thereafter. However, Kirby once again leaves Marvel (as newly minted editor-in-chief Jim Shooter does away with all writer/editor positions like the one Kirby’s contract granted him), and the rest of the run is filled out by Steve Ditko, who had also returned to Marvel after an even longer break with the company.

All in all, the 2001 comic book is not the movie, and if you’re looking for a deeper dive into the concepts presented by Stanley Kubrick and Arthur C. Clarke, I recommend reading Clarke’s follow-up novels, 2010, 2061, and 3001, or the unfairly maligned film adaptation of the first sequel, 2010: The Year We Make Contact. However, this is a great Kirby comic, and the artwork is among the best he ever did. That make it worth the price of admission alone. Sadly, that price is steep these days, as licensing issues have prevented the book from ever being reprinted in any form, and with the rights to the source material at rival studio, Warner Bros., it’s hard to believe a reprint could happen anytime soon. You’ll have to hunt down single issues. The treasury edition and the first appearance of Machine Man tick up the price tag, but a savvy buyer could probably put the collection together for around $150 US. If you’re into the cosmic comics of the 70s, especially from Marvel and especially from Jack Kirby, it’s a series that will not disappoint.