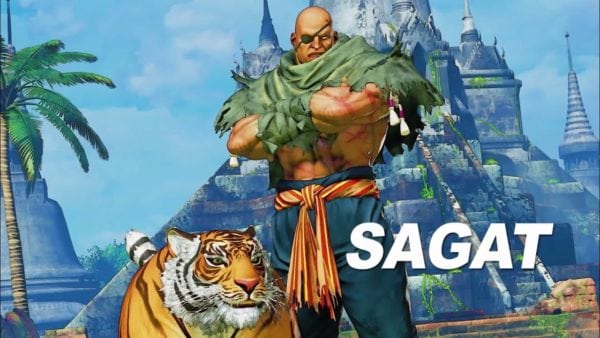 Sagat needs no introduction, this former boss of the original Street Fighter game makes his return, only now as a hermit who is fighting his inner demons.  Sagat brings with him the Tiger Shot, Tiger Uppercut and Tiger Knee moves.

G, on the other hand, needs an introduction as the self-proclaimed President of the World who wants to unify the world, providing he is its leader.  G gains his power direct from the Earth and uses this to increase his Presidentiality level up to three which in turn increases the power of his special moves.  He can use a V-Skill, called G Barrier which absorbs projectiles.

Bow down before Sagat, the Solitary King, for his arrival beckons your attention! Sagat’s move set remains true to his previous appearances with his signature Tiger Shot, Tiger Uppercut, and Tiger Knee Crush.

G, the Man of Mystery, bursts in to Street Fighter V: Arcade Edition on August 6! Drawing energy from the Earth to strengthen his powers, G will unite the people as one.

Both G and Sagat are available individually for $5.99 or 100,000 Fight Money or are available as part of the season 3 character pass.