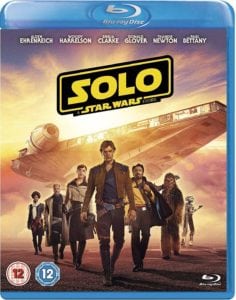 The second (and last?) standalone Star Wars movie serves up the origin story of everyone’s favorite smuggler and all-around scoundrel, Han Solo. Star Alden Ehrenreich doesn’t quite embody Solo’s swagger, but Donald Glover steals the movie as young Lando, and the rest of the cast does its job. I put this one up there with The Force Awakens among the new Star Wars movies. This Blu-ray release has a second high-def disc with about two hours of bonus features. 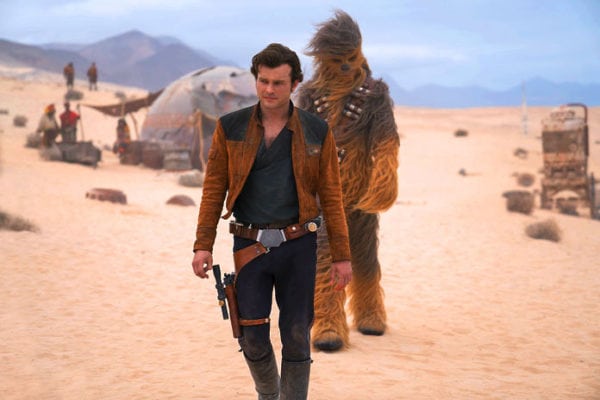 I just came back from showing my ten-year-old self Solo: A Star Wars Story. He had gone to see The Empire Strikes Back with his father (a reluctant participant, but cut the old man some slack: he had some catastrophic domestic shit headed his way in about three years) and he flipped out when he heard that Han Solo, who had still shot first in 1980, was going to get his own origin story some day.

Then my ten-year-old self found out how long he’d have to wait to see this one and, well, let’s just say he wasn’t thrilled. Luckily, I could return to 2018 and watch it again. (Yes, I’m saving my time machine technology for myself. Yes, I tried the kill Hitler thing – it doesn’t really work the way you think it will.)

Among the new Star Wars movies, Solo doesn’t quite rank up there with Rogue One (my favorite since Empire), but it’s on par with The Force Awakens and it’s certainly well ahead of the mixed bag that is The Last Jedi. I can only assume that its poor box office showing was the result of the toxic backlash against The Last Jedi. (Sure, it’s fine to hate that movie, but it’s just a movie. Some people need to calm down.)

In a way, Solo is a biopic. Enough information has come out about his back story over the years that Star Wars fans shouldn’t have been surprised about many of the story beats in this movie. Han Solo (Alden Ehrenreich) grows up on the mean streets of Corellia, where he’s torn away from his girlfriend Qi’ra (Emilia Clarke) when the two attempt to escape from the clutches of the criminal underworld only to be separated at the last moment. 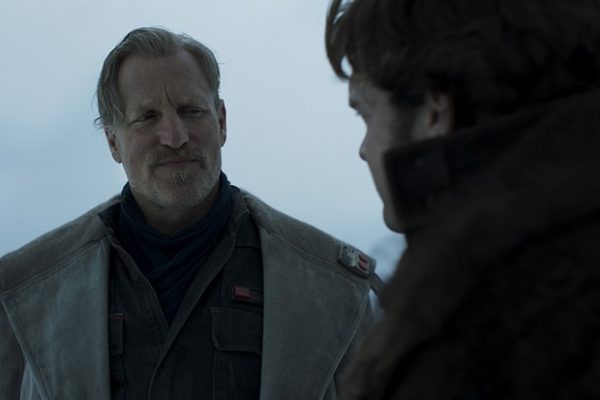 Han joins the Imperial Navy and encounters a group of criminals led by Tobias Beckett (Woody Harrelson), who are impersonating soldiers for a reason that’s not quite clear. (I suppose it’s explained in some Expanded Universe comic book or novel or trading cards or something.) He tries to blackmail them but ends up being turned in by Beckett for desertion.

Han is tossed into a pit where he’s to be fed to a beast – I’m sure nearly everyone knew that the creature would turn out to be Chewbacca, so I don’t think I’m spoiling anything by revealing that. Han and Chewie escape, hook up with Beckett and his crew again, and head off on a heist job. Han later meets up with Qi’ra again (she’s working for the Crimson Dawn crime syndicate) and eventually falls in with the smuggler Lando Calrissian (Donald Glover).

The rest of the movie features young Han Solo’s greatest hits, including winning the Millennium Falcon from Lando during a game of Sabacc and finishing the Kessel Run in less than 12 parsecs. The setup for C-3PO’s “I don’t know where your ship learned to communicate” line in The Empire Strikes Back was much appreciated. There are also a couple nice twists at the end, and it’s clear that a sequel has been set up, although Solo’s poor box office showing has likely nixed that possibility.

Ehrenreich has some nice lines to work with, such as his “Not if you round down, buddy” response when Chewie disputes his Kessel Run claim, but I just couldn’t buy him as a young Han Solo. He just didn’t really fit the part. Glover, however, steals the show as young Lando, and the rest of the cast, including Thandie Newton as Beckett’s love interest, turns in solid performances, which is all you can ask of a Star Wars movie.

This Blu-ray release of Solo includes a code for a digital copy and sticks all the bonus features on a second platter. There’s no commentary on the film and, unsurprisingly, the bonus materials carefully avoid the firing of original directors Phil Lord and Christopher Miller and their replacement by Ron Howard. If you knew nothing about this film’s production history, you’d assume Howard was there from day one. It’s a bummer that those tumultuous events weren’t addressed, but, you know, that’s Disney for ya.

The bonus features run about two hours total and include: