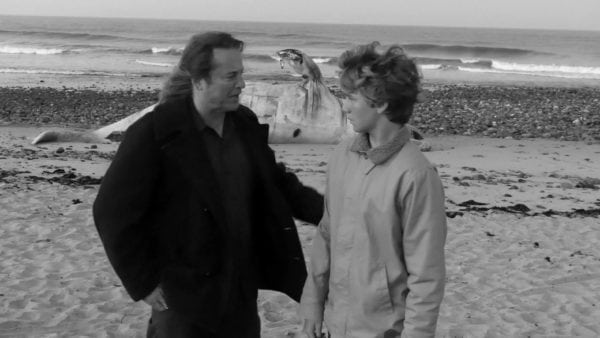 First of all in every single Q&A I have done the audience always says how incredible the acting is from the entire cast. That is a very important fact. Those are the people that are paying money to see the movie and their opinion matters.

The reason for the negative review is deeply seated in the landscape of psychiatry and can only be understood through the eyes of Sigmund Freud. The character I play is the spirit of a Father who is materializing to visit his son who is suffering from fear that is crippling him emotionally. The character is an archetypal Father Figure who has a deep love for the son and gives him spiritual guidance Love and teaching. If the critic hates the character I play, he is probably a male who had a bad relationship with his own real life father and he is likely suffering from what Freud called a negative “Father Complex”. The Father complex can be positive or negative. A positive Father Complex is when you are happily drawn to men who are Father Figures and you become great friends with them and they serve as a positive mentor and teacher to you. A negative Father Complex is when you are scared to death of men who represent themselves as a Father Figure and the fear is overwhelming. The fear can be particularly over whelming if the psyche is also simultaneously caught in an Oedipus complex meaning that they were sexually attracted to their own mother. This would mean they were in emotional competition with their father in trying to win the affection of their mother. Since they were in competition with their father for the affection of their mother they fear the father as someone who might try to castrate them. This is the root of what Freud called “Castration Anxiety”. The critic from Variety sees my character as a Father Figure that reminds him of old stuff with his father and the memory invokes a fear that my character and me are here to castrate him. The natural response is for him to lash out and try and castrate me – Douglas Burke – and the character I play. He knows the way to hurt an actor is to criticize his acting. He didn’t stop there. He tried to castrate every actor in the movie. The proof that he is caught in these Freudian complexes in in the reviewer’s own words. He describes me Douglas Burke the actor and my son Sage Burke the actor with these words “He (Sage) looks and sounds for all the world like an intimidated adolescent who’s meekly serving as an audience of one for a crazy drunken parent who might turn violent at any second. It’s more than a little troubling to consider the possibility that the younger Burke isn’t merely acting.” Here he is implying that I, Douglas Burke, am an alcoholic father who abuses my son. This is the proof that my psychoanalysis of this gentleman is accurate. He is engaging in what Freud called cognitive transference.

He is taking feelings he had towards his own father and directing them towards me. He does not even know me or my son. I obviously remind him of his own father who possibly and most likely was an abusive alcoholic father who victimized the man reviewing the film. He doesn’t know it but by doing his review he gave me the greatest compliment a method actor can receive. My performance as an actor pushed him onto the memory of his own personal past and gave him an experience that was visceral and real. That is why I love this man J. Leydon whom I have never met. The honesty and passion he expressed in his review of his own feelings is proof that great acting happened in the movie Surfer.

The instructions to my actors in Surfer are to forgive him for his review. He was blinded by rage from having a negative Father complex coupled with a oedipal complex that bred castration anxiety. Send him love, which he needs. He is not a bad guy he is just suffering from the snares of Freudian complexes, which he doesn’t understand and that is why we at Burke International Pictures pray for him every day. The way out of his suffering is actually prescribed in the movie Surfer. In the movie I teach Sage to imagine the hands of his spirit holding the identities in him that are in fear and to send as much love as he can into those identities until he realizes that as soon as those identities feel love they come to see that they just needed attention from the spirit. The realization is complete that the fear wasn’t anything big but just identities inside that needed love and attention from the spirit. If the critic would engage in the meditation prayer technique taught in Surfer he would receive the power to forgive his own Father for whatever happened and also he would be able to receive the love of Almighty Father in heaven into his body. He would be transformed from an angry critic acting as a crustacean murmuring a manic mantra of melancholy at the bottom of the sea into a great angelic whale who sings the joyous songs of heaven. He would use his talents to write things to lift people’s spirits instead of trying to engage in psycho spiritual assassination of the spirits of the actors. So I hope my actors feel protected by me now. Their acting in Surfer is outstanding. As for actors who might consider acting in one of my films, hopefully they can see that critics who attack their acting in a Burke International Picture will be psychoanalyzed by me with a Freudian Scalpel.

At this point I have to comment on some great actors I love who have alpha male Father like personalities whose acting talents were wrongly attacked by critics who had a negative Father complex syndrome coupled with an oedipal complex that bred castration anxiety which inspired rage in the critics that was transferred inappropriately to these actors. The critics tried to castrate the acting talent of these actors because the actors reminded the critics of an abusive father. These great alpha male actors are:

Sylvester Stallone is an actor who is every bit as good as Marlon Brando. He has had several movies that were worthy of a best actor nomination. As recently as his performance in Rocky Balboa Stallone talks to his son about how when life knocks you down you have to get back up in a heartfelt monologue worthy of praise but the critics look at him through the looking glass of a Freudian complex lens.

Arnold Schwarzenegger is a great alpha male actor with a strong father energy. Because of his training as a body builder he has a deep awareness in the muscles and tendons of his entire body coupled with an emotional heartfelt honest will and sincerity in everything he does. No other actor has ever had the body awareness of Arnold that is backed up by emotion.

Clint Eastwood is a great alpha male actor who is often said to be wooden. The oak tree is the symbol of Zeus the father of all the Gods. The critics think they are bashing Clint when they say he is wooden. However, it is a great compliment to be compared to a mighty oak tree. It is actually a quality that is impossible to imitate. It is a quality of a Father alpha male. Only a great actor can allow this quality to come through and Clint does it with effortlessness, which is why he is so loved by the public.

I also would add my son Sage Burke who did a great acting job in Surfer. His alpha male quality is exemplified by the fact that he did his own stunts and rode huge waves as a 100 lb. 14 year-old boy. He is an alpha male who is also a great actor. 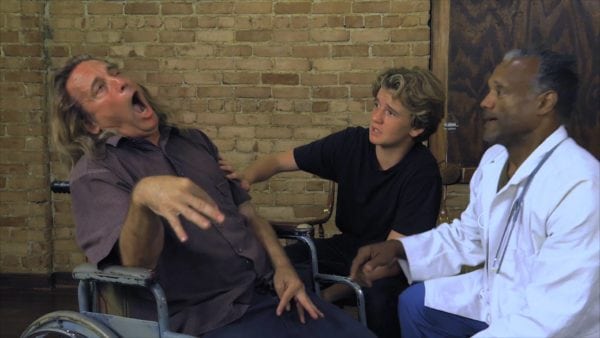 What are some of your favorite surfing movies? How often do you yourself get out to surf these days?

My favorite Surf Movie of all time is Big Wednesday directed by John Milius. Big Wednesday was also bashed by some of the critics during its time. It is a great movie.

I try to surf at least once a week even when I am super busy. Lately with the film in theaters I do not get out every week. I like to go off alone to go surfing to spots where there are fewer people whether the waves are good or not. The sensation of being alone in the water is important for me.

How would you describe Surfer: Teen Confronts Fear to someone who has never heard of it?

A critic Jesse Knight who published a review on Letterboxd.com said it best. “Defies categorization. Obliterates and nullifies critical assessment. Promulgates deliverance from the bondage of heretofore cinematic formula and tradition.”

Is there anything else you’d like to add about your experience watching this movie with an audience?

I love the midnight movie crowd. I love the laughter and the periods of silence. They are such fun people that are filled with good energy. I love the faith audience crowd. They are very different and often quiet through the whole movie and their questions are very philosophical. I hope people share their experiences and spread the good word about Surfer so everyone gets a chance to see it.