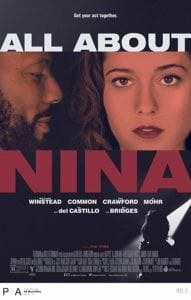 Nina Geld (Winstead) is a bracingly funny and blisteringly provocative stand-up comedian whose career is taking off, but whose personal life is a near-complete disaster. To escape a difficult ex and to prepare for a prospectively life-changing audition, Nina flees to Los Angeles where she meets Rafe (Common), who challenges almost every preconception she has — including those around her own deeply troubled past 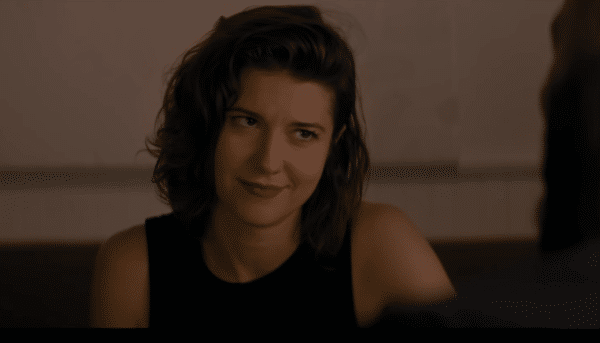 It’s not long before Rafe (rapper turned actor Common) tells the eponymous Nina (Mary Elizabeth Winstead delivering a raw performance masking great pain behind her standup comedy routines) that she’s either not being herself on stage or with him, and it takes even less time for the audience to realize that her public comedic persona is more the person she wishes she was instead of her current self.

Up on stage, Nina is blunt with her relentless jokes criticizing men (the opening scene of All About Nina is roughly 3 minutes of material about how much progress society could make on bettering the planet, curing diseases, and more if men weren’t constantly thinking about fucking 24/7, so if you have one of those fragile male egos this might not be the movie for you although that’s your loss), but her private life is aimless and attached to toxic masculinity and rampant unwise sexual activity, the majority of which comes from her married ex-boyfriend Joe (Chace Crawford), a physically abusive cop so unhinged and angry he slaps Nina in their first scene together. Stuck at a crossroad in life between pursuing further career goals or dealing with this stalker psychopath that Nina herself is addicted to, she decides to make the move to Los Angeles rooming with a friend of her agent all with aspirations of getting hired by a well-respected comedy club. 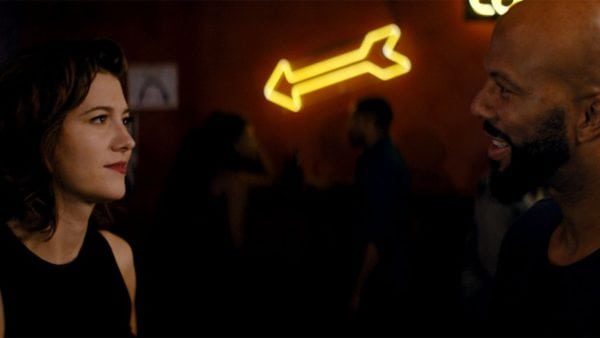 Written and directed by Eva Vives, the script is fantastic at presenting Nina as both a very vulnerable woman emotionally but a very talented one at her craft that basically feels like Wonder Woman on stage. Much credit also has to go to Mary Elizabeth Winstead who seems to be game for anything in this highly challenging role; she hits the punchlines of her jokes with consistency and is given passable material to work with all-around, contains fantastic chemistry with Common simultaneously keeping her guard up from getting involved with other massive jerks but also is prepared to be challenged on the prospect of serious dating, and also gets to ugly cry after a lengthy, personally revealing monologue, putting a nice dramatic bow on a performance filled with incredible range. Easily the best moments in the film are whenever her and Common share the screen, getting to know one another on a deeper level; they’re warm with just enough emotional trauma peppered in to make both feel like fully realized and fleshed out characters.

There are also quite a few amateurish writing blunders such as including cheesy motivational phrases like “the truth will set you free”. Far more frustrating however is a third act reveal meant to generate massive empathy for Nina and her questionable decisions with the general life she leads (something already present), and in the defense of Mary Elizabeth Winstead, it does work, but only thanks to her skill as an actor. Clearly, this character has gone through something severely traumatic to behave the way she does, so it’s no surprise that there would be a revelation of some sort, but the timing and form of abuse itself come across as reaching too hard. In other words, the emotional trauma feels more like a narrative device and less something very real about her. That’s probably not the way you want to go with treating sensitive subjects like this, especially in the age of #MeToo. You can’t help but feel the film would work better if the audience knew this information earlier in the film considering the how and why Nina reveals it out loud is powerful enough to stand on its own without needing to also come across as a forced emotional bit. As is, that handling of the character revelation just feels tacky, regardless of the talent behind the delivery.

Smaller plot points but ones also equally relevant to modern times involve Nina’s dealing with the male-dominated industry of standup comedy. It’s no surprise that due to the sexual raunch fueling her material and how horn-dog crazed men can be (you can say that again for any entertainment medium industry), male comics and fans alike grace Nina after the show with compliments and opportunistic kind words that ring hollow, only serving as desperation to get her into pants. I suppose some people, mostly men containing the aforementioned fragile male ego, will find these segments exaggerated, but given everything going around in the world around us, it’s really not. Her interactions with these disgusting men also help make the time spent with Rafe more pleasurable to watch unfold.

All About Nina is an accomplished debut from Eva Vives and probably required viewing for anyone that finds themselves drawn like a magnet to all of the wrong significant others or those simply worried that they will fuck things up with the right person. Mary Elizabeth Winstead’s self-destructive and acerbic presence is a winning match for Common’s laid-back and respectful caring man. They are a winning duo but the heart of the film comes from Winstead; she’s a mess but hits all of the required empathetic notes to get audiences on her side on the path to finding stability, peace of mind, and possibly love.