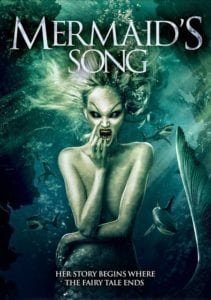 When Serena decides to give up her life as a mermaid to live on the land, her daughter, Charlotte, is given a choice: continue to live as a human or return to the sea and restore the balance.

Originally titled Charlotte’s Song, Mermaid’s Song premiered at the Vancouver Film Fest in 2015 but is being released on demand for the first time this week. Riffing on the story of The Little Mermaid, much of the promotion is focusing on Iwan Rheon (Game of Thrones), who plays a gangster that makes an investment in the family-owned bar run by Charlotte’s dad, George (Brendan Taylor), but his screen time is minimal and will likely disappoint anyone who seeks out the film for this reason.

While you might not be familiar with her work, Katelyn Mager, who plays Charlotte, is a reason to check out this movie. Her performance, in some ways, reminds me of Marlene Dietrich’s in The Scarlett Empress, in that there’s that same character arc of Charlotte starting out innocent (in the very early years she’s played by Sarah Boey) and becoming harder as the film goes on. Mager sells that transition and there’s many a scene where she carries the film singlehandedly.

There’s no question Mermaid’s Song is flawed, though it gets a lot better at the end, and while I don’t suspect the chances are good for a sequel, I was actually left wanting one by the time the picture was over. The movie is not for children. Very early there’s a suicide scene that’s as graphic as the one in 13 Reasons Why, if not as emotional, but then it shows Charlotte walking in on her mother (Natasha Quirke) while she’s still alive, so that’s very emotional. The original Grimm’s Fairy Tales were dark and violent but, while it may not sound like it after the scene I just described, Mermaid’s Song doesn’t go dark enough, if that’s what it wants to be, and while visually it might seem reminiscent of Carnivàle at first (in that they’re both supernatural tales set during the Dust Bowl), the costumes look like modern clothes, trying to pass for period and the film has more success with Charlotte’s make-up, when she transforms into a mermaid.

A big part of the film is the stage show Charlotte’s sisters put on, but the choreography is horrible and after sitting through full musical numbers you’re not surprised to learn the bar is facing foreclosure. Mermaid’s Song‘s biggest fumble is the way it handles its mermaid mythology. While a woman Charlotte calls grandmother (Riverdale‘s Barbara Wallace) explains the imbalance Serena caused, when she ditched the sea for the land, Charlotte lives miles away from the water, and the question of whether she should stay human or become a mermaid never becomes the pressing issue it’s hyped up to be.

What concerns Charlotte is her father and the compromises he’s willing to make on his daughters’ behalf to keep Randall happy. That the girls in the show are his daughters comes as a surprise when you first find out. Charlotte is the only one who shares her mother’s red hair and (apparently) the mermaid gene, too, but any sign of the man Charlotte’s mom fell in love with is gone. What’s left is a man who quickly proposes they give up their daughter to the mermaids and who commits atrocity after atrocity against them in this movie, without a breaking point.

It sure would help if Charlotte had some special abilities to help her, and it turns out she does (including telepathy, for some reason), but if it weren’t for the film’s title you wouldn’t know to expect that they’re coming. There’s a scene where her mother performs that would be the perfect opportunity to set-up that mermaid’s have a siren’s song, but the film doesn’t use it, and while Charlotte’s interactions with men (including a crush on an older one, Tim, played by Steve Bradley) offer interesting asides into her character, making the final third of Mermaid’s Song its strongest, the film squanders a lot of potential beforehand. It’s a shame it takes a while to click, because I might’ve trailed off otherwise, but having stuck around to the end, Mermaid’s Song might not be The Little Mermaid you remember but it carries its own fascinations.