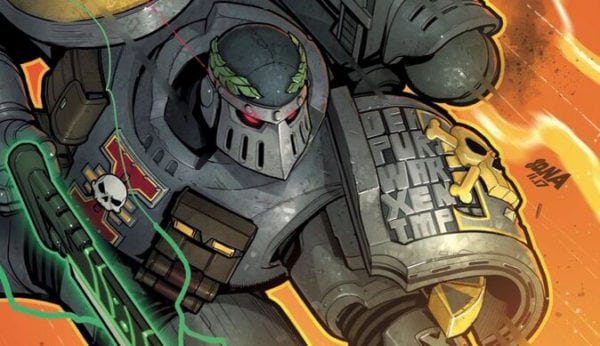 This December sees the release of Warhammer 40,000: Deathwatch, a graphic novel from creators Aaron Dembski-Bowden (The Horus Heresy: The First Heretic) and Tazio Bettin (Warhammer 40,000: Will of Iron), and you can take a look at a trailer here courtesy of Titan Comics…

Based on the popular Warhammer franchise, the Deathwatch stands guard as the last line of defense at the edge of the universe, defending Mankind from inhuman horrors!

The Deathwatch is made up of the best of all Space Marines, recruited from across all Chapters to serve as the last resort against the multiple hostile alien civilizations threatening humanity. To be chosen to serve in the Deathwatch is a great honor granted only to the most elite and experienced veterans, but the specifics of their sacred duty must remain secret!

Stranded and alone at the edge of the Calaphrax Cluster, one Deathwatch kill-team must hold the line against the xenos hordes that threaten to destroy humanity. Assailed on all sides, they alone have the strength of mind and body to act as humanity’s first, and only, line of defense!