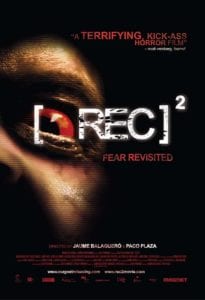 A SWAT team is sent into a quarantined Barcelona apartment complex where a TV reporter and a fire crew have become trapped due to an outbreak of deadly infection. Their mission is to gather and record evidence of the infection tearing its way through the building and hopefully find a cure if they can survive the night. 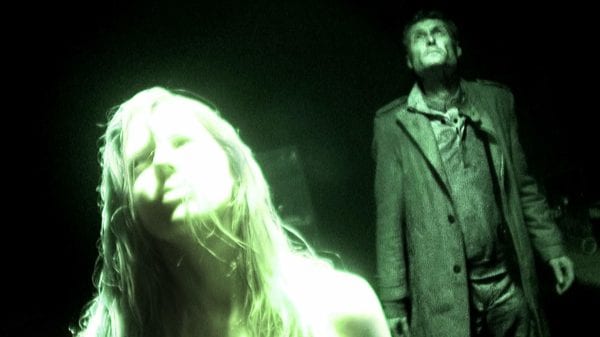 The Spanish horror [REC] is, in my view, one of the best found-footage horror films ever made and one of my favourite entries in a genre that I largely don’t care much for. So with the original film a major international success this, naturally, led to the creation of a sequel and while most found footage sequels (and horror sequels generally) feel like they where rushed into theatres as a blatant attempt to cash in on a trend resulting in a stream of lesser entries (*cough* Paranormal Activity *cough*) [REC 2] manages to mostly avoid these pitfalls and deliver another exhilarating slice of found-footage horror.

Instead of a TV crew, however, we follow a heavily armed SWAT team as they storm the building to look for survivors and hopefully find a way to cure the infection rampaging through the building. However, despite the firepower on hand, the film is still an intense and terrifying experience as the men find themselves in over their heads with their weapons and training seemingly useless against the seemingly endless hordes of rabid zombies.

The use of helmet-mounted cameras adds to the terror, with the film occasionally switching to the direct points of view of the individual officers allowing for some trouser filling moments of horror. My personal favourite scene of the whole film is one such instance. a scene in which SWAT member Larra finds himself cut off and outnumbered. Until this point, Larra was a tough and hard-nosed SWAT team member not afraid of a fight, but trapped and alone he soon breaks down into a whimpering wreck in a bathroom while the bloody screams and arms of the undead break down the door behind him. It’s a short yet brilliant moment of raw claustrophobic horror that left me collapsing into a whimpering wreck. 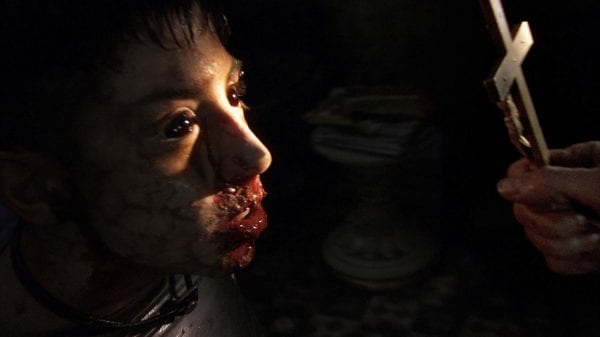 The SWAT team are not the only protagonists, however, as about halfway through the film switches perspectives to a group of teenagers (with their own camera of course) who manage to sneak into the building through a back entrance. This is where the film starts to slip a bit, with the teenagers’ irritating antics quickly testing your patience. The character of Tito is an especially grating annoyance who I just wanted to slap in the face. Thankfully he does get a lovely big smack to the chops courtesy of a helpful fireman. However, this dip in quality is rather short-lived thanks to the reappearance of original film’s heroine Angela Vidal (again played brilliantly by Manuela Velasco) who returns to aid our new heroes, with the pace picking up again as we return that dreaded top floor apartment where the first film ended.

The strongest elements of [REC 2], like its predecessor, is in the sound design. The screams of the infected hordes are at their most frightening, not when they’re up close, but when they move away into the distance, still howling away like animals. It’s that kind of stuff that really creeps me out more than anything. One other scene in which the teenagers are forced to duck from sniper fire is another great moment that’s best watched with headphones with the crisp sound design making it feel like the bullets are whizzing past your own ears.

The camera work is once more solid throughout, although at times the shakiness can become a bit too nauseating, especially in one particular scene where the SWAT team is overwhelmed with the sheer busyness of events making it somewhat difficult to make out who’s doing what to who. Essentially it’s the kind of cluttered messiness that often makes me want to avoid found footage films altogether. That and the use of the words “Paranormal” and “Activity” in their titles. I seriously hate those films. 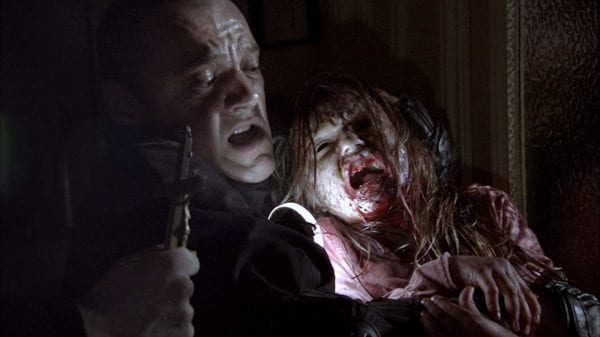 Tightly paced, suitably claustrophobic and exhilarating when the horror starts, [REC 2], while perhaps lacking the original film’s freshness, is still an intense, fun and scary sequel that further demonstrates to a hater like me like me that maybe there is some good in the found footage genre after all. Check it out.